What’s on in Abbotsford

Abbotsford prevents a diverse cultural landscape, with its mix of business and creative types contributing to the city's vibrant and dynamic atmosphere. The intriguing blend of lush green spaces and industrial architecture also give the place a truly unique look, with plenty of converted factories, trendy cafes and bohemian-themed bars along its infamous Johnston Street. One of Melbourne’s most fashionable districts, Abbotsford is proving an increasingly popular location with holidaymakers and business travellers and is quickly gaining a reputation as Melbourne’s equivalent to a ‘Latin Quarter’.

Where to stay in Abbotsford

Like much of Melbourne, Abbotsford is has a huge array of accommodation options ranging from backpacker hostels to luxury hotels. The area is a popular base for those looking to explore the rest of the city and attracts both tourists and business visitors. If you are planning an extended stay in Abbotsford, then there’s also the option of serviced apartments. These are perfect for those looking for their own private space and come with enhanced features, such as room cleaning, private access and full kitchen facilities for those looking to self-cater.

What to do in Abbotsford

Abbotsford’s appeal lies in its diversity - visitors can enjoy listening to jazz music in an independent cafe one moment, then watching the latest movie in a modern cinema complex the next. The range of facilities and innovative use of former industrial spaces make this district a great place to simply walk round and explore the myriad of attractions in the immediate vicinity.

Another great thing about Abbotsford is, despite its industrial heritage, it is also home to the Yarra Bend Park - a sprawling green space, complete with wildlife park, winding river and sports and exercise facilities. There are also various events held throughout the summer months, including food fares, music festivals and other cultural events.

Of course, from Abbotsford you also have the option to venture further into Melbourne, which itself is one of Australia’s most modern and exciting cities, with a huge selection of word-class restaurants, sporting facilities, concert venues and numerous other attractions celebrating the region’s diverse artistic and cultural heritage.

Tips for staying in Abbotsford

Abbotsford has a surprisingly diverse range of eateries, with health food venues being particularly well represented by the likes of Lentil As Anything, Mesa Greek Cuisine and Frankie Says. Oriental cuisine is also extremely popular, with Jinda Thai Restaurant, MASIL Korean Restaurant and Shizuku Ramen & Craft Beer being amongst the local favourites. Alternatively, those looking for something a little more casual will find Rita's Cafeteria a great place to pick up a light lunch.

Most of the districts shopping can be found on the western edge of Yarra Bend Park, with local outlets such as FME Apparel, Salvos Stores and Dragonfly Toys offering high quality goods. A little further from the main shopping area is the Hive Shopping centre, which features several local retailers, including fashion stores, homeware and large grocery chain stores.

Most of the attractions in Abbotsford involve simply enjoying the local bars and cafes dotted around the vicinity. Its main selling point however, is the Yarra Bend Park - a sprawling green space that includes adventure areas, English gardens and even a golf course. Alternatively, for something a little more low-key, there’s also the Edinburgh gardens to the north west of the neighbourhood.

Melbourne has an extensive public transport network, which of course extends to Abbotsford. The area is served by several dedicated stations, making it extremely to get around by rail as well as to access the wider Melbourne area. Buses also run frequently, both locally and to other neighbourhoods, offering a cheap and convenient way of getting around.

Melbourne has a diverse economy supported by the  finance, manufacturing, and tourism sectors. ANZ is an international banking and financial services group operating locally, whilst manufacturing is represented by Amcor and BlueScope. Another major employer includes Telstra - one of the country’s largest telecommunications groups. 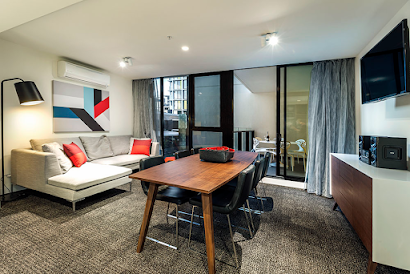 Things to know before booking serviced apartments in Abbotsford