Business and leisure travelers mostly prefer serviced apartments in Adelaide for the sheer convenience and comfort it offers. Adelaide is one of the most beautiful cities in the world and a major hub of business and tourism alike. It is no wonder then that so many travelers arrive in the city in hordes.

There are numerous apartment options available courtesy of TheSqua.re which are ideal for both corporate and leisure travelers alike. These apartments not only offer excellent proximity to major destinations in Adelaide but oodles of space and privacy alongside for a memorable stay in the city.

Travelers will want to rent apartments in Adelaide that offer the best amenities and facilities. These units come with high speed Wi-Fi, flat-screen televisions, well equipped kitchens and even provisions for room cleaning and concierge services wherever available. They offer the most practical, convenient and luxurious solution for both long and short term guests in Adelaide.

Benefits of Furnished Apartments in Adelaide

Travelers look to furnished apartments in Adelaide for various reasons including space, privacy and better alternatives as compared to traditional rental accommodation. These serviced apartments offer a perfect option for guests since they take care of aspects like deposits, maintenance charges, utility bills, agency fees, furnishings, bedding, accessories, cutlery and everything else.

The rent apartments in Adelaide are usually located near major public transportation facilities including underground/metro stations, bus stops and major roads. This makes it easier for guests to access major corporate/business hubs along with the key landmarks of the city. Some apartments even have provisions for gymnasiums and fitness facilities for guests.

As serviced accommodation experts, we understand how guests need the utmost comfort and privacy during their stay. We offer luxuriously designed Adelaide apartments that offer plush interiors and the best furnishings. We also offer round the clock assistance and support for all queries.

Opting for corporate housing in Adelaide is a smart move by all means! Business travelers will greatly enjoy the warmth and comfort provided by these units. They are also equipped with everything you need for a memorable stay including fully equipped kitchens, all vital appliances, flat screen televisions and high speed Wi-Fi to name just a few amenities. They also ensure easy proximity to major business and corporate hubs for business guests.

Rent apartments in Adelaide double up as convenient and useful short term in the city. They are ideal for those looking to stay for a few days, a week or slightly more. They are well equipped with everything from flat screen televisions and high speed Wi-Fi to kitchens and appliances. Additionally, guests can experience greater convenience with regard to accessing public transportation facilities and business hubs nearby.

The best holiday apartments in Adelaide offer a wonderful mixture of privacy and comfort to guests. They are equipped with plush interiors, the best amenities and all necessary appliances. Relax with spacious living rooms, bathroom amenities, comfortable beds, well equipped kitchens, flat screen televisions and high speed Wi-Fi for company. Travel easily to public transportation links and tourist attractions in the city. A memorable experience awaits holidayers in Adelaide courtesy of these serviced apartments.

Where to Stay in Adelaide

The best neighborhoods to stay in Adelaide include North Adelaide which lies 2 kilometers northwards from the city, the CBD or City Center, Glenelg which is the core beach zone, Norwood and Kent Town, West Beach, Salisbury, Windsor Gardens, Henley Beach, Mawson Lakes and Prospect. 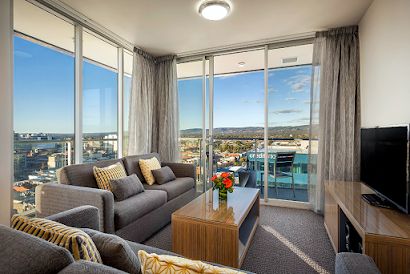 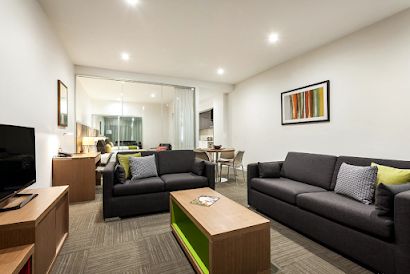 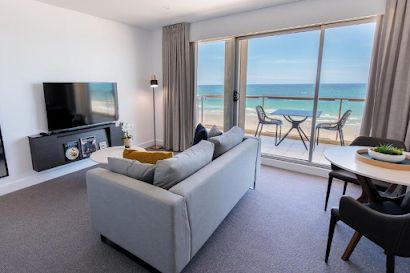 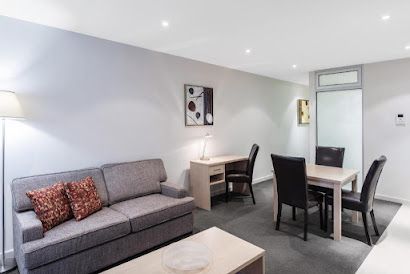 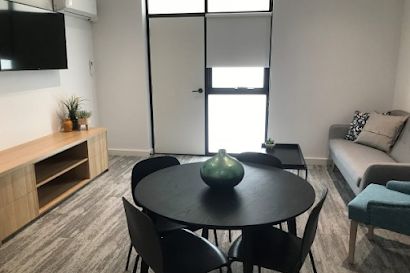 Things to know before booking serviced apartments in Adelaide

Adelaide is the capital of South Australia and the country’s 5th most populated city. Adelaide includes Greater Adelaide and the Adelaide Hills along with the City Center. The Adelaidean demonym denotes the city’s residents and the area itself. The City Center was originally occupied by Kaurna people and is called place of the red kangaroo or Tarndanyangga. It is also known as Victoria Square. Adelaide lies on the Adelaide Plains, northwards from the Fleurieu Peninsula between the Mount Lofty Ranges and Gulf St Vincent. Here are some interesting facts about Adelaide:

Adelaide achieved Gross Regional Product of $20,157m as of the 30th of June, 2020. Flourishing industries here include bio-sciences, automotive manufacturing, ICT, engineering, tourism, medical research and wine. The Adelaide metropolitan zone has two airports, namely the Adelaide Airport and Parafield Airport. The former caters to more than 8 million people every year while the latter majorly covers small aircraft, recreational aviation and pilot training activities. The military Edinburgh Airport lies in the northern suburbs of the city and was built in 1955.

Cost of Living in Adelaide

Here are some helpful tips for visiting Adelaide:

Things to Do in Adelaide

There are several things to see and do in Adelaide. Here’s taking a look at some of them.

Q1. What are the most popular things to do in Adelaide?

Q2. What are some free things to do in Adelaide?

Q3. Does Adelaide have many romantic attractions?

Q4. What are the most family-friendly things to do in Adelaide?

Q5. What are the more unusual things to do in Adelaide?

Places to Visit in Adelaide

Some of the best places to visit in Adelaide include the following:

Places to Eat in Adelaide

Adelaide is a vital transportation point for the north-south and east-west routes. The city has its Adelaide Metro which comprises of the contracted bus network including the O-Bahn Busway, a tram network and six commuter railway lines. The tram route runs between Hindmarsh which is an inner suburb and the city center along with Glenelg on the seaside. Tramways were junked in the 1950s although they were steadily revived sometime in the 2010s with new extensions and upgrades alike. The Adelaide metropolitan zone also has four expressways along with a freeway.

There are two commercial airports serving the Adelaide metropolitan zone, namely the Adelaide Airport and Parafield Airport. The former is the busier airport, lying in the southwestern suburbs and caters to more than 8 million passengers every year. The latter is the second airport that is 18 kilometres away from the city center and takes care of recreational aviation, pilot training and small aircraft purposes. There is also a military airport called Edinburgh Airport that lies in the city’s northern suburbs. It was developed in the year 1955 as a joint venture with the United Kingdom (UK) for weapon development purposes.

Adelaide has warm and dry summers along with windy and cold winters. The best time to visit is between mid December and mid March. Temperatures usually hover between 45 and 83 degrees Fahrenheit throughout the year.