Atlanta is one of the most visited tourist destinations in the United States. It is the entertainment centre in the South. It is Georgia’s most populated city which is situated at the highest elevation of the Mississippi River. The city has several tourist attractions, world-class restaurants, professional sports teams, and wonderful nightlife. The demand for furnished apartments in Atlanta has skyrocketed as people around the world have started travelling again. Visitors are in for a treat if they enjoy galleries, concert halls, museums, and theatres. People can experience a thriving and diverse culture by exploring the streets of the city. There is something fun and extraordinary for every individual from romantic getaways to an urban adventure. Tourists are sure to love the city and keep visiting over and again and over again.

Some of Our Top Furnished Apartment in Atlanta:

Serviced apartments are slowly becoming very popular among tourists. Nowadays, Travelers find furnished serviced apartments more comforting and convenient than traditional rental accommodation. These apartments offer a good amount of facilities and amenities. It is a popular alternative because of several factors especially for the legal and contractual aspects such as the maintenance charges, deposits, bills, and agency fees along with accessories and furnishings.

The apartments are mostly available near major tourist attractions and transport connections like metro stations or Underground, bus stops, and key thoroughfares. This makes choosing the right apartment easier as per its surroundings. It gives the traveller a good knowledge about the major business and corporate hubs. Some Atlanta corporate housing also have additional amenities like gymnasiums and swimming pools if the building offers them.

The furnished apartments in Atlanta also give priority to their customers’ comfort and safety. They offer support and 24 hours assistance along with the best facilities and plush interiors.

The demand for corporate housing in Atlanta has increased as more and more business people start to travel. Business travellers choose to stay in furnished apartments because it is ideal for relaxing after long hectic days. Business travellers can unwind with spacious living areas, plush furnishings, flat-screen televisions, comfortable beds, fully-equipped kitchens, and high-speed Wi-Fi. These serviced apartments are situated near major public transportation and business destinations that ensures a comfortable experience for businessmen/corporate.

Atlanta is an entertainment spot and a perfect holiday destination. The city has numerous holiday apartments in Atlanta offering ample space, practicality, and convenience for families and leisure travellers. These serviced apartments are also well-connected with proper public transportation facilities. They also have all the modern facilities required by travellers such as high-speed Wi-Fi, flat-screen televisions, and fully equipped kitchens.

Atlanta furnished apartments are best suited for people who want a combination of comfort and luxury when travelling. These are spacious, luxurious and well-equipped for travellers. The short term rentals in Atlanta in is also located strategically close to major tourist landmarks. It is an ideal option for people who wish to have a homely experience when away from home.

Where to Stay in Atlanta 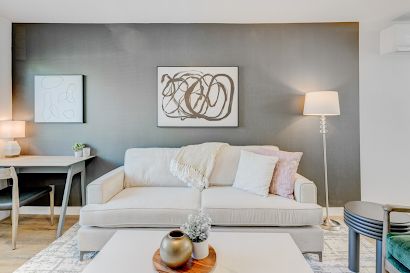 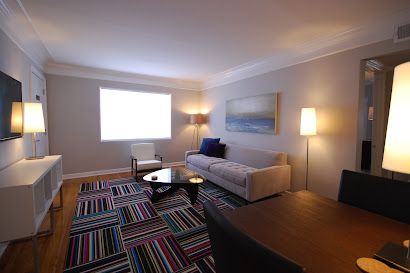 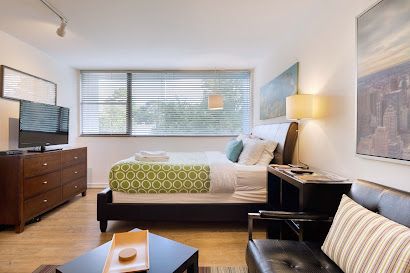 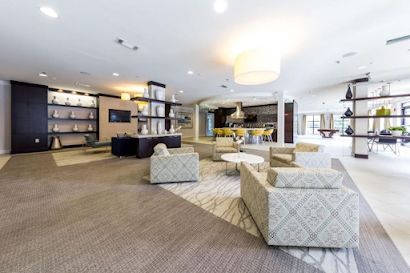 Things to know before booking serviced apartments in Atlanta

Atlanta is called the “City in a Forest” that has more than 100,000 trees planted through the “Trees Atlanta (non-profit)”. The city is also recognized as one of the “most forested urban areas” as its covers 47.9% of Atlanta, according to the National Forest Service.

Cost of Living in Atlanta

Atlanta offers a much less expensive living than cities like San Francisco, Boston, and New York. The city offers mild winters, great nightlife, award-winning restaurants, and boosting the economy. The apartments in Atlanta witnessed an increase in rent of about 18.8% annually. The median rent of 1BHK and 2BHK in Atlanta is about $ 1,407 and $ 1,416, respectively. The cost of living depends on the part of Atlanta you choose to stay in. one of the best neighbourhoods in Atlanta is Buckhead which is known for its safety, amenities, and quality schools.

Atlanta is known for the busiest airports in the world and is worth exploring. People must avoid visiting the city during the hot summers. If you are planning for a vacation in Atlanta, then you must keep the following tips in mind:

Renting a car is one of the best things you can do when visiting Atlanta. Though the city has good public transportation connectivity, renting a car is still the best option. It offers you freedom and allows you to travel wherever you wish to.

Travellers must also try the world-famous South American food which is delicious. Trying out some delicious Southern meals like fried chicken, onion rings, etc. is one of the top things to do. Travellers can simply head to the 70 years old food establishment, the Mary Mac’s or the Varsity to try some amazing southern delicacies.

Atlanta offers a wide variety of art pieces for art lovers. It is a relatively newer museum but has a low admission fee which makes it a budget-friendly option spot for travellers. Visiting a museum can be a fun experience especially during hot summers. The exhibitions held in the museum keep on changing which makes it all the more interesting.

You must choose wisely when you wish to visit the city. The time you choose will greatly impact your vacation. If you wish to go sightseeing then summer is not an ideal time to visit Atlanta.

Things to Do in Atlanta

Atlanta offers numerous attractions and fun activities for travellers. Let us have a look at some of them:

Q. What are popular things to do in Atlanta?

Q. What are some free things to do in Atlanta?

Q. Does Atlanta has many romantic attractions?

Romantic attractions in Atlanta include Starlight Drive-in Theater, Skyline Park, World of Coca-Cola, and others.

Q. What are family-friendly things to do in Atlanta?

Some of the family-friendly things to do in Atlanta include LEGOLAND Discovery Center, Georgia Aquarium, Atlanta Botanical Garden, Fernbank Museum of Natural History, Zoo Atlanta, Centennial Olympic Park and more.

Q. What are unusual things to do in Atlanta?

Some unusual things to do in Atlanta include riding a private gondola, learning twerk dance, throwing axes at“Bury the Hatchet”, creating a terrarium, visiting the museum “Gone with the wind”, and more.

Places to Visit in Atlanta

Some of the places that travellers must visit in Atlanta include:

Places to Eat in Atlanta

The restaurants in Atlanta offer world-class food and ambience. Some of the worth visiting places to eat include Ray’s in the city, Babette’s Café, Aviva by Kameel, The Capital Grille, Eight Sushi Lounge, and others.

Some of the best places to have street food in Atlanta include Seans Candler Park, Falafel Nation, The Hive Buckhead, King Crab Atl, Botiwalla, and more.

The transportation system of Atlanta is complex with several systems that include 47.6 miles of a rail line, 91 bus routes, bike paths of 45 miles and 1600 licensed taxis. It also has the busiest airport in the world that boasts of a comprehensive freeways network.

Atlanta has very hot summers which make it quite uncomfortable to roam around in the daytime. On the other hand, winters are cool yet not as chilly as other cities of the United States. Therefore, travellers must choose to visit the city during winters and not summers.