There are numerous furnished apartments in Austin that will fit the bill for travellers. Serviced apartments offer the perfect mix of comfort and convenience. They come with the best amenities and appliances for maximum utility. They also offer the best solutions for long-term stays in Austin. They are also ideal for temporary accommodation needs or shifting to the city.

Some of Our Best Furnished Apartments in Austin TX:

Our furnished apartments in Austin TX come with the best amenities and appliances. We make sure that you enjoy free and high-speed Wi-Fi along with concierge services wherever available. You can also expect room cleaning, flat-screen televisions and private access alike.

Our serviced apartments in Austin are usually becoming popular as accommodation options for travelers. Serviced apartments are better alternatives than conventional rental units in the city. They offer enhanced comfort and maximum convenience with contemporary facilities.

They are hugely popular since all maintenance costs, legal and contractual aspects and bills are covered along with agency fees. You need not even pay deposits likewise. Furnishings and fixtures are already in place so you need not bother about the same as well.

Serviced apartments are usually located near major transportation hubs. They include Underground or metro stations along with bus stops. Some apartments even have swimming pools and gymnasiums for maximum convenience.

Guests will discover that these apartments are ideal for long or short-term stays in Austin. They can sample the city and the locality in the best possible manner. Shifting here need not always be troublesome.

Being serviced apartment experts, we understand how guests like their own homes away from home. We offer luxurious and plush furnishings and interiors. We offer the best amenities and appliances. We also ensure a human touch in all our interactions. You can expect the best service at all times while staying in our apartments.

Our corporate housing in Austin is ideal for business travellers. Enjoy the sheer space, comfort and privacy in our serviced apartments. Our units offer the best appliances and amenities at your fingertips. You can rustle up delicious meals in your own fully-equipped kitchen. Enjoy the best entertainment and recreational amenities along with free Wi-Fi. Stay connected and productive all throughout. Unwind and relax in style with comfortable beds and bathroom amenities. Our short term rentals in Austin are also well connected to major transportation hubs and business/commercial hubs. All in all, you can expect a fulfilling experience while staying at our serviced apartments.

Our furnished apartments in Austin are eminently suitable for holidayers. Families will love the considerable space and flexibility at their disposal. Our apartments offer the best amenities and appliances. They come with fully-equipped kitchens, free Wi-Fi and flat-screen televisions among other conveniences. You can expect to find security features and plush furnishings alongside. Enjoy unwinding in style while accessing tourist landmarks nearby. There are major shopping, dining and entertainment zones in the vicinity. Our furnished apartments make it possible to put up in your own home away from home in the city.

Where to Stay in Austin

There are several great neighbourhoods to consider in Austin. You can consider staying in Downtown for its lovely fine-dining restaurants and bevy of establishments. South Congress is suitable for cafes, boutiques, taco bars and the iconic Congress Avenue bridge with its bats! Tourists may also stay in East Austin for its charming ambiance and artsy vibe while South Lamar is located near major outdoor activities including Zilker Park. North Loop is a good option for a more relaxed and bohemian vibe. 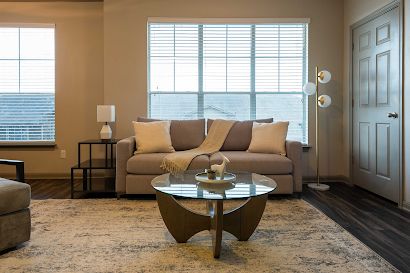 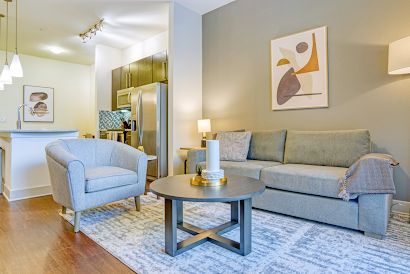 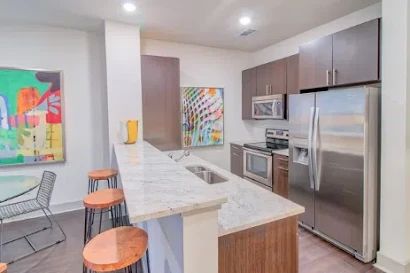 Things to know before booking serviced apartments in Austin

Austin is the capital of the state of Texas and the biggest city within Travis County. Incorporated back in 1839, it is the country’s 11th highest-populated city. Austin is held as a Beta or global city.

Here are some interesting facts about Austin:

Austin is a major business and technology center with numerous Fortune 500 entities possessing headquarters or offices here. They include Google, IBM, Facebook, Texas Instruments and Apple. The Greater Austin Metropolitan Area touched $86 billion in GDP for 2010 and has been growing ever since.

The Austin-Bergstrom International Airport (ABIA) lies 5 miles southeast from the city. Austin Executive Airport caters to smaller airports away from the city center along with general aviation needs.

Cost of Living in Austin

Here are some handy tips for visiting Austin:

Things to Do in Austin

Austin offers plenty to do for travelers. Here’s taking a look at some of the best activities at hand.

1. What are the most popular things to do in Austin?

Some of the most popular things to do including unwinding at Barton Springs, checking out the lovely Zilker Park and even walking the Greenbelt. You can visit the Alamo Drafthouse for a movie or LBJ Library for recreation. Rainey Street is also a great place to party.

2. What are some free things to do in Austin?

You can rent a bike and explore the city while experiencing the Summer Music Series and exploring the hill country. Other popular free activities including checking out the UMLAUF Sculpture Garden and also the Cathedral of Junk museum.

3. Does Austin have many romantic attractions?

Couples will love roller-skating at Playland along with drive-in movies, ghost tours or live concerts. You can check out several hiking trails together or opt for a reading session at BookPeople. Touring the city’s numerous distilleries, wineries and breweries is also recommended.

4. What are the most family-friendly things to do in Austin?

5. What are more unusual things to do in Austin?

Some unusual things to do are visiting the Museum of the Weird and the Cathedral of Junk along with celebrating Eeyore’s birthday in Pease Park. Check out the Hippie Hollow Park and Esther’s Follies too.

Places to Visit in Austin

Here are some of the best places to visit in Austin:

Places to Eat in Austin

Austin is home to major shopping zones like South Congress which have several gift stores, vintage shops and more. Check out stores like Tesoros Trading Company, Lucy in Disguise with Diamonds and Allens Boots. South First Street is another shopping paradise with Bloomers and Frocks, Fortress of Inca and more. Other shopping zones include the 2nd Street District, East Austin, North Loop and several other major thoroughfares.

Summers are quite hot in Austin with shorter and cold winters. The best time to visit is between September-November and March-May. The summer from June-August is avoidable for tourists.