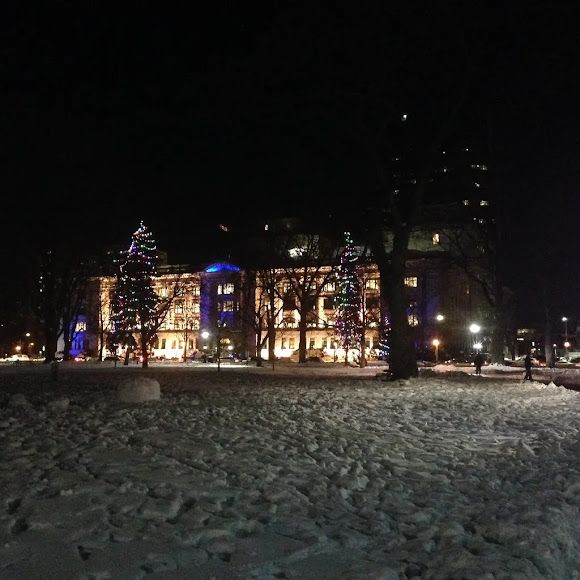 Is London in December the winter wonderland it’s made out to be in countless films and books?

Well, it is winter. And all the things that are going on in London in December do turn it into a kind of wonderland…

But is it all snow covered roofs with billowing chimneys, red faced cherubs having snowball fights in the streets and couples strolling arm in arm on the quiet powdered pavements, having just put the finishing touches to a magical snowman?

In short, does it snow in London and does it turn into the magical Christmas fairyland from a Dickens’ novel? Well, not really. In fact, it is very unlikely to snow in London at all at this time of year.

Snowfall in London is unfortunately quite rare. It is a large urban centre and therefore experiences higher temperatures in its centre that are felt on its outskirts. This means that even when it does snow in the suburbs, London is still rarely affected.

The figures support this too. The UK gets an average of just under 24 days of snow a year, London gets just ten. Even when it does snow in London it rarely settles for long.

The saddest thing is that on average only one of these snow days falls in December, and even then the average amount of snowfall is less than an inch. This makes the likelihood of a London Christmas with a snowy backdrop very low indeed.

But that doesn’t mean that December and Christmas in London can’t be fun. In fact, December in London is pretty awesome.

Things to do in London in December

In the second half of December London is truly a magical winter wonderland (minus the snow). There are Christmas themed walking tours, concerts, sports events, ice skating rinks, Christmas markets and of course the fantastic New Year’s Eve fireworks. Here are a few to consider.

Officially recognised as the ‘Big One’. This is arguably London’s premier Christmas event as it mixes so much into one.

Having been a success for the last thirteen years, it really feels like the formula has been perfected. There’s fun for the entire family all day long, as well as more adult entertainment later on in the evening.

There’s a large ice rink (biggest outdoor rink of its kind in the UK), a couple of circuses, fairground rides, a big wheel, an ice kingdom, a Christmas market plus plenty of places to eat and plenty of bars to drink at.

Entry is free, but it must be said that everything else costs quite a bit of money. It should also be noted that entry to some parts, such as the ice kingdom and the observation wheel, need to be booked in advance.

The many bars include those in a Bavarian style village, where steins of beer can be purchased and enjoyed in front of live themed entertainment.

One of the quintessentially British Christmas films is being shown on a huge screen at the Event Apollo in December. This isn’t in itself remarkable. There will be plenty of places to watch cheesy but wonderful Christmas movies all over London.

However, the difference here is that the movie will be backed up by a full, live orchestra, who will be playing along with the soundtrack.

Warm alcoholic drinks are no stranger to Christmas, but it normally begins and ends with mulled wine for most people.

This is an event which markets itself on being ‘anti-mulled wine’. The hot cocktails on offer here are a much more varied bunch and are brought to Vinegar Yard by some of the best known modern spirit producers.

There’s also plenty of good food and good music to experience too.

The Winter Wonderland in Hyde Park may have the size, but the Southbank has the location. This is loads of holiday themed events and activities based right on the side of the River Thames.

Christmas lights seemingly adorn everything that they can, mixed in with all sorts of Christmas themed decorations and of course a massive tree.

There’s a Christmas market to peruse, festive shows and endless choices for eating and drinking.

There’s also lots of entertainment targeted specifically at families. The Caribbean Christmas with Just Vibez and the Winter Pop Up Cinema are two examples of this. The latter showing family classics such as Frozen and Toy Story.

It’s sometimes nice to find something a little less flashy, something that feels a bit hidden away, perhaps something that’s still a bit of a secret to many Londoners and tourists alike.

This is a place, famed amongst culinary fans, which is just a short distance away from Farringdon Station but still manages to remain relatively concealed from view.

It’s a place to explore food and drink with every street in the area having a different story to tell about things such as beef, gin and other food and drink stuffs that are associated with its history. The sights and smells are wonderful and at Christmas time these are magnified tenfold as the vendors compete as to who can provide the tastiest festive treats.

There’s homemade mulled wine and mince pies aplenty but the thing that catches most people’s eye is the pick your own Christmas Pudding tree. A very unique way to select a Christmas classic.

For anyone who hasn’t been to Kew or those who have been before, the daylight might be gone but there are still not many better times to go than nighttime at Christmas.

The mile long trail, illuminated by thousands of fairy lights, is spectacular enough, but the fact that it runs through some of the world’s most beautiful gardens is even better. There’s live performances taking place along the walk too, as well as interactive installations and amazing holiday themed displays.

These include a light installation with a waterfall effect and a light display that changes colour when touched.

There’s also a rumour that Santa might be walking the trail too.

If there’s a place in London which gives people a sense of a medieval Christmas, it’s Hampton Court Palace, though it has to be said it’s a stunning place to visit at any time of the year.

During the festive season, Hampton Court Palace turns into a wonderland, for lovers of festive food. There’s loads to try and buy, food, drink, cookery demonstrations, utensils all served up in a merry Christmas atmosphere.

The latter is helped by the bandstand belting out the odd Christmas tune.

The pop up bars that frequent the fayre might make it necessary to utilise public transport. Fortunately, it’s only a five minute walk from Hampton Court train station which can be accessed from Waterloo or Clapham Junction.

Hogwarts in the Snow

There’s not much more quintessentially British than the Harry Potter universe and the place to really celebrate the magnificence of the film series is at Warner Bros London, where so much of it was filmed.

At Christmas time, it gets that little bit better too as the sets get a complete festive makeover. The Great Hall is lined with Christmas trees and laid out for a spectacular Christmas feast. The top end of the hall is set up for the Yule Ball complete with snow and magical musical instruments.

The festive mood doesn’t stop with the Great Hall either. The Gryffindor Common Room is decorated for the season, and the scale model of Hogwarts used for exterior shots is coated in a blanket of snow too.

All of the sets are decorated in keeping with the holiday celebrations but that doesn’t mean the legendary costumes and film props aren’t still on display too. It’s all here to see and celebrate.

As previously mentioned, snow in London in December is probably off the table. Here’s what to really expect so days out can be planned accordingly.

At the beginning of the month, the temperatures are still fairly mild, December is certainly not the coldest month in London by any means. Expect temperatures of around 8 or 9 degrees during the day. This normally goes down to around 5 or 6 degrees at night.

Sometimes there are anomalies. The odd day in December can be around the 13 degrees mark. In fact, the highest temperature recorded in the capital at this time was 17 degrees.

As Christmas and January approaches, the temperature becomes markedly colder and rarely goes above 6 degrees. Overnight and early mornings can be between -1 and 4 degrees though can often feel much colder.

Once it’s realised that London isn’t going to be snowy at Christmas, people rarely come for the weather. The sun is only up for around 8 hours and even then it barely gets above the horizon.

When it is up it is barely noticed as most days in December tend to be grey and overcast with a consistent drizzle of rain.

Lucky there’s plenty going on in London besides the weather!

Thick, warm clothing is essential for December in London but layered clothing is important too. The tube can still be insufferably hot and shops and restaurants also tend to have their heating on full blast.