The Top Treasures in the Natural History Museum 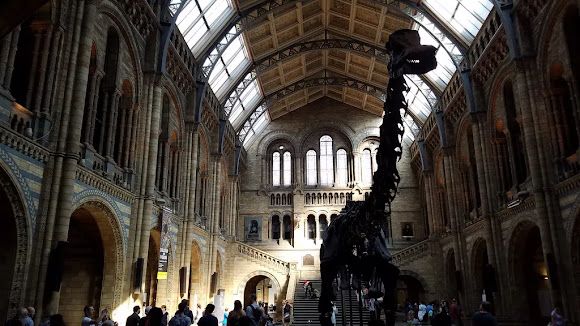 It’s hard to believe that an institution as renowned as the Natural History Museum could have started out as little more than an exhibit itself, tucked away in a corner of the British Museum.

The museum opened in its current home back in 1881, but surprisingly was still officially linked to the British Museum until 1963. Perhaps even more surprisingly its official name (until 1992 believe it or not) was the ‘British Museum (Natural History)’. Despite being called the Natural History Museum colloquially for as long as anyone can remember!

Over 5 million people visit the museum every year and over 850 people work there, researching and looking after some 80 million artefacts.

Nowadays it is not only the home of animal artefacts, including a blue whale skeleton, the largest animal to have ever existed, hanging from the ceiling of the entrance hall. It also contains scientific journals, manuscripts and artwork related to natural history. It is also considered the primary headquarters of natural history related research in the world.

This means that although Dippy the Dinosaur, the diplodocus skeleton that hung in the entrance hall from 1905 to 2017, may no longer be on show here, there are still plenty of unique things to enjoy here.

What with 80 million artefacts it is probably beyond most people’s capability to see everything the Natural History Museum has to offer in a single day. The square.re has serviced apartments in South Kensington which are great for being used as a place to rest before setting off to explore the museum further.

Not only that, Kensington serviced apartments can be used as a great base whatever your reason for visiting London. So much on your doorstep as well as fantastic transport links for everything that isn’t.

For this that don’t have a few days to spare, here’s a selection of the best things to see at the Natural History Museum.

This isn’t an old version of the long extinct bird that wanders about the place, rather the famous painting upon which our entire perception of how the animal looked is based.

The dodo was extinct long before the invention of photography so its look is based on illustrations that have come to light. The most famous illustration is this painting which hangs in the Natural History Museum.

It was this painting that curator Richard Owen used when he tried to piece together the dodo fossils he collected, actually laying the bones on top of the painting.

Sadly, the outcome is no longer believed to be accurate.

On the Origin of Species - Charles Darwin

The book that changed the future of natural history forever. The most influential biological book ever written and the first to acknowledge how species actually came to exist in the first place.

The book held at the NHM is a very rare first edition and dates from 1859. This book didn’t invent evolution, that was already a ‘theory’. It instead showed how natural selection proved how evolution worked. It was not surprisingly viewed with suspicion at the time, some saying that humans could not have evolved from animals, as we didn’t have the same spiritual beliefs!

A great example of the legendary casts, and one of the only places you can see them outside of Pompeii itself.

In 79AD Mount Vesuvius erupted catastrophically, wiping out the towns that surrounded it almost in an instant. The layers of ash that covered Pompeii hardened over time and perfectly preserved a snapshot of life in Roman times.

This preservation, unfortunately, included a great many of the town of Pompeii’s residents, meaning that their bodies were frozen in the positions they were in when they died. Whilst the bodies rotted away, the casts remain.

The casts on display at NHM show a man and a dog.

There are an estimated 40,000 meteorites on display in museums around the world. The chances are you’ve seen one or even touched one?

However, there aren’t many that have been scientifically proven to have come from another planet. In the case of the Nakhla Meteorite, Mars.

Its origin dates from about 12 million years ago. An object crashed into Mars, the resulting blast was so large that it sent bits of rock shooting into space. A bit later on, in 1911, Earth passed through the same orbit and the rocks came crashing down onto our planet. In Nakhla, Egypt to be exact.

Apparently, the fireball in the sky was pretty spectacular at the time, as was the shower of rocks that came flying down. The Nakhla Meteorite at the NHM is one of those rocks.