Paris is one of the most instantly recognisable cities in the world.  The top attractions in Paris are easily identified with the merest of glances.  The Eiffel Tower, the Arc De Triomphe or the Louvre are synonymous with this great city. One of the things that people love about Paris is its familiarity.  It’s a familiarity which is experienced not only by frequent visitors but by people that are visiting for the very first time.  The attractions in Paris are so instantly recognisable that it’s sometimes difficult to ascertain whether you’ve been there before.

It’s these famous sites that most people want to visit when in this city.  Forget about the obscure and the ‘off the beaten track’ attractions, people want to see what Paris is famous for! Pointless to describe, as most people can conjure up an instant image.  This wrought iron tower has been the indisputable symbol of Paris since it opened in 1889 as the entrance to the World’s Fair.

If you’re keen to stay on the well beaten tourists track, you can’t get more beaten than this.  The Eiffel Tower is the most visited monument in the world that you have to pay to see. 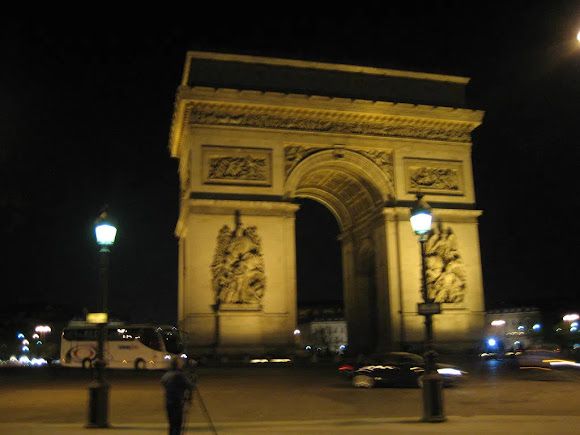 Probably the second most recognisable Paris monument, after an obvious first.  This famous archway stands at one end of an equally famous road, the Champs Élysées.

This monument was erected to remember those who fought and died for France during the French Revolution and the Napoleonic Wars.  Underneath in the vaults is the tomb of the Unknown Soldier from World War I.

The Arc was designed in 1806, but not completed until 1836, twenty-five years after the original architect had died.  Its first famous event occurred in 1840 when Napoleon’s remains passed underneath it.

Not only one of Paris’ most historic monuments, it is also the largest art museum in the world.  It’s also on of the city’s most central landmarks, located on the Seine’s Right Bank.

There are approximately 38,000 things to see here, so set some time aside for your visit.  They date from prehistoric times right through to modern day.

If you’re looking for places to stay in Paris you’re going to need somewhere central in order to see all of these sites.  Thesqua.re has many centrally located properties, including on the Champs Élysées itself.