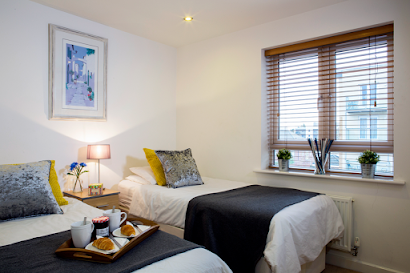 Things to know before booking serviced apartments in Borehamwood

Borehamwood has a range of properties, from luxury apartments to large houses. Choosing the right base for an extended stay will be as much down to personal preference as anything else, but whatever your budget and size requirements, we can offer a selection of properties situated in the most sought after areas.

Our serviced apartments in Borehamwood all come fitted with the latest mod-cons and furnished to exceptionally high standards. Each one is selected for its convenience and comfort, benefiting from a well equipped kitchen and luxurious bathroom fittings. When booking through the Squa.re, you will also have access to our expert advice, meaning you are sure to find the perfect accommodation for your needs - whether on a corporate stay, commuting into the city, or simply wanting to explore the surrounding areas.

Being so close to London, there are no shortage of activities and day trips to be had just a short journey from Borehamwood. However, those wishing for something a little more nearby will find that the town holds a few surprises of its own.

Nearby Trent Park is a large open space with woodland and lakes. Once a royal hunting ground, it is now frequented by dog-walkers and ramblers. For those looking for family friendly activities, they will find Dinosaur Adventure Golf and Safari or MegaJump Trampoline Park are particularly popular with kids. There’s also Elstree & Borehamwood Museum, which has interactive exhibitions and events, charting the history of life in the town over the 19th and 20th centuries. Depending on the filming schedule, it might even be possible to see the next hit show being produced at Elstree studios

Borehamwood shopping park has recently undergone a major refurbishment and is now home to several large superstores, including Debenhams, Argos and Next. The town’s high street also features several smaller retailers, including convenience stores, a post office and several cafes.

Getting around in Borehamwood

Borehamwood is not a big town, so most places are easy enough to reach on foot - including neighbouring Elstree. Cycling is also a popular way of getting around, as the town is surrounded by scenic countryside. It’s also worth considering travelling by car, as may of the places of interest are quite spread out and driving between them is often advisable.

Elstree and Borehamwood station is located on the Thameslink line, with direct rail services to London St. Pancras and Blackfriars, Luton and Bedford to the North. The station is within London Zone 6, which mean it is within the London Oyster Card system. Bus services connect Borehamwood & Radlett with Watford, St Albans and Potters Bar. There are also London buses providing connections to locations in north London such as Colindale, Edgware and New Barnet. Generally the service is regular and reliable and multi-journey passes are available.