Staying in the beautiful city of Brussels is always a unique experience for travelers, both for leisure and business purposes. This is why they usually choose Brussels apartments courtesy TheSqua.re on corporate or holiday trips alike. Every apartment offers privacy, space and comfort to guests while ensuring highly coveted and desirable city locations alongside. The apartments are ideal for every kind and duration of stay. Brussels itself offers a wealth of attractions and landmarks for tourists while being a hospitable and warm city with a friendly local population. Choosing a suitable apartment is imperative for truly enjoying your stay here.

Offering added amenities like fully equipped kitchens, private access, flat screen televisions, room cleaning and high-speed Wi-Fi among others, these furnished apartments in Brussels are ideal picks for short or long term travelers in the city.

There are numerous benefits offered by Brussels apartments for travelers. For starters, they are better alternatives to conventional rental accommodation. These serviced apartments in Brussels offer comfortable and convenient stays minus the hassles of bothering about deposits, agency fees, utility bills, maintenance charges, furnishings, accessories, cutlery, bedding and the like.

At the same time, these furnished apartments in Brussels come with the best amenities and facilities for contemporary travelers, catering to every possible need and requirement. They are usually located in close proximity to major public transportation links including metro or Underground stations, main thoroughfares and bus stops. This makes it easier to access business or corporate hubs from apartments along with all major tourist landmarks as well. Some apartments even have provisions for accompanying gymnasiums and fitness facilities to ensure continued wellbeing of guests.

Being serviced accommodation experts, we understand that guests need a place of their own to call home during their stay in Brussels. We offer apartments with plush interiors, top-class amenities and round the clock service for solving all queries swiftly.

Corporate housing in Brussels is an ideal solution for jet-setters and business travelers touching down for meetings, conferences, site visits and so on. These apartments ensure comfortable and luxurious stays in the city while being conveniently connected to public transportation facilities and major business/commercial hubs alongside. They offer ample space and privacy while providing the best amenities like fully equipped kitchens and appliances, high-speed Wi-Fi, flat-screen televisions and a lot more. Relax and unwind in style after a hectic work day at your Brussels apartment.

Short term rentals in Brussels will be suitable for travelers seeking comfortable and plush stays for a few days, a week or even more! These units offer everything that a modern traveler could want, right from flat-screen televisions and high-speed Wi-Fi to fully equipped kitchens and all vital appliances. They ensure great connectivity to major tourist landmarks and corporate hubs alike.

Brussels vacation apartments are excellent choices for holidayers and leisure travelers alike. They can enjoy ample space and privacy at these units while also experiencing facilities like high-speed Wi-Fi, flat-screen televisions and fully equipped kitchens with all appliances. The apartments are located in close proximity to major tourist landmarks and attractions while also being connected to public transportation facilities alongside. They are great picks for memorable holidays in Brussels!

Where to Stay in Brussels

Brussels is home to several popular neighborhoods including City Center, Saint Gery, The Marolles, Saint Gilles and even the fashionable Ixelles which is a preferred choice for several expats with its chic vibe, parks, squares and amazing bars and restaurants. 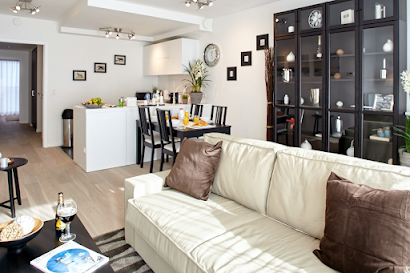 Things to know before booking serviced apartments in Brussels

You may also be interested in
More about Brussels

Brussels or the Brussels-Capital Region comprises of 19 municipalities including the City of Brussels, the Capital of Belgium. The region is centrally located in Belgium while being a part of the French Community of Belgium and the Flemish Community as well. Brussels is the richest and most densely populated region in the entire country. Here are some interesting facts about Brussels:

Brussels has a thriving economy, accounting for 1/5th of the GPD of Belgium and 17.7% of countrywide employment. The Brussels Capital Region has numerous airports including the Brussels-National Airport, Brussels South Charleroi Airport and Melsbroek Air Base.

Cost of Living in Brussels

A regular restaurant meal will cost roughly 15 Euros will you will need 1.80-2.60 Euros for a one-way transportation ticket. A monthly pass will cost you around 50 Euros while basic utilities will cost approximately 135.75 Euros every month. Rentals for apartments usually hover between 600-2000 Euros every month.

Here are some handy tips for visiting Brussels:

Things to Do in Brussels

There is no shortage of wonderful things to do in Brussels. Here’s taking a look at some of them.

Q. What are the most popular things to do in Brussels?

Q. What are some free things to do in Brussels?

Free things to do in Brussels include checking out the famous city center, picnicking in the park, visiting the Palace of Justice, savoring views at Mont des Arts and visiting any free museum.

Q. Does Brussels have many romantic attractions?

Romantic attractions in Brussels include the Van Buuren Museum, BOZAR-Center for Fine Arts, The Grand Place, Royal Greenhouses of Laeken, Elevator to the Sky and more.

Q. What are the most family-friendly things to do in Brussels?

Family-friendly things to do in Brussels include checking out the Comic Strip Center, Grand Place, Museum of Cocoa and Chocolate, Manneken Pis and Museum of Musical Instruments (MIM).

Q. What are the more unusual things to do in Brussels?

Unusual things to do in Brussels include visiting the Grote Markt or Grand Place, shopping at Galeries Royales de Saint-Hubert, exploring statues like Jeanneke Pis, Manneken Pis and Zinneke Pis and even checking out Atomium.

Places to Visit in Brussels

There are numerous places to visit in Brussels including the following:

Places to Eat in Brussels

The Brussels-Capital Region is home to the Brussels-South, Brussels-Central and Brussels-North train stations. There are several minor railway stations serving the City of Brussels. The Brussels Intercommunal Transport Company is the local operator for public transport, covering 19 municipalities. The Brussels metro was established in the year 1976 although premetro underground lines have been in existence from 1968 and were served by tramways in Brussels. This is the sole rapid transit system in all of Belgium and the network contains four regular metro routes along with three premetro lines too. There is an extensive tram and bus network that covers the whole region. The Brussels tram system comprised of 17 lines as of the year 2017. The bus network complements the railway network with 50 routes and 11 routes at night.

There are three airports serving the entire Brussels-Capital Region. The main airports for Brussels are the Brussels South Charleroi Airport and the Brussels National Airport while the Melsbroek Air Base lies at Steenokkerzeel and is primarily a military airbase, used for civilian travelers on rare occasions.