Demand has shot up the roof for furnished apartments in Chandler since the city is fast witnessing growth as a key tourist and business hub in Arizona. Chandler lies within the Maricopa County in Arizona while being a suburb of the MSA (Phoenix Arizona Metropolitan Statistical Area) while being adjoined by Tempe, Phoenix, Mesa and Gila River Indian Community in tandem with Gilbert.

Our Top Furnished Apartments in Chandler are:

All contractual and legal aspects are completely covered including maintenance charges, agency fees, deposit and bills along with other aspects like accessories, bedding and furnishings. These serviced apartments are usually situated in close proximity to major transport connections such as underground and metro stations, bus stops and major roads. Some apartments even have additional amenities such as swimming pools and gymnasiums wherever available.

Being serviced accommodation experts, we understand how guests need a second home when they reach Chandler. Our units are equipped with luxurious and plush interiors which ensure a warm and comfortable ambiance for guests while we also offer support and assistance round the clock.

Corporate housing in Chandler will be highly convenient and comfortable for all business travelers. They will appreciate the spacious and fully furnished apartments available here while enjoying amenities like fully equipped kitchens, high-speed Wi-Fi connectivity and flat-screen televisions among others. Bespoke corporate housing units are tailored to ensure the best relaxation and convenience for business guests while they will also enjoy strategic connectivity to major business and corporate hubs in Chandler.

Short term rentals in Chandler, AZ offer a comfortable and welcoming ambiance to travelers. They are ideal for those looking to stay for short-term periods ranging from a few days to a week or slightly more. These rental units offer the best facilities including high-speed Wi-Fi, flat-screen televisions, fully equipped kitchens and a lot more.

Holiday apartments in Chandler offer ample space, comfort and privacy for guests. They are ideal for those seeking more convenience during their trips while enjoying easy access to key tourist landmarks and attractions without any hassles whatsoever. These apartments from TheSqua.re are suitable for solo travelers and families alike.

Where to Stay in Chandler

Chandler is home to several neighborhoods like Silverton Ranch, Hoy Homes and Dobson Estates which are hugely popular with travelers. Tourists also prefer staying at Chieftain Village in Chandler. 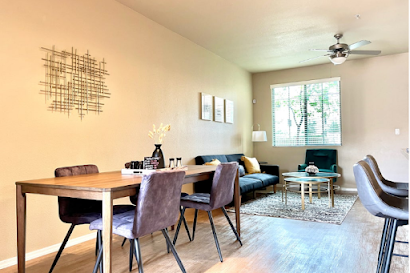 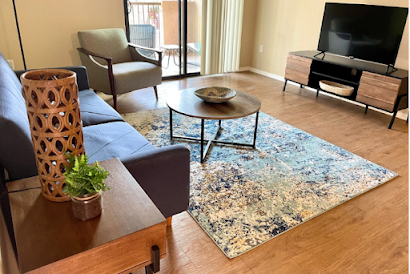 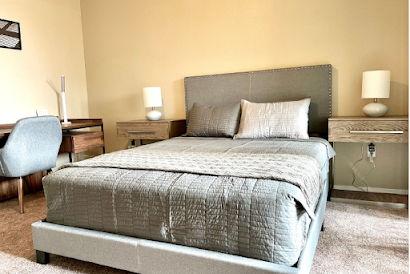 Things to know before booking serviced apartments in Chandler

You may also be interested in
More about Chandler

Chandler originated from Dr. Alexander John Chandler, Arizona Territory’s first veterinary surgeon, settling on a ranch southwards from Mesa in 1891. He settled down here and started studying irrigation engineering, acquiring 18,000 acres eventually by 1900. He started making plans for a townsite on what was called the Chandler Ranch back then. This opened in 1912 on 16th May.

Here are some more interesting facts about Chandler:

Intel is a major presence in Chandler with four locations within the municipal zone and the first factory that was labeled as environmentally sustainable as per LEED regulations. Semiconductor and electronic component manufacturing have remained big industries here. From 2003 onwards, $3 billion of investments has poured into the Price and Santan freeway and Price Road Corridor. Companies headquartered in the city include Microchip, Infusionsoft, Rogers and more.

Chandler Municipal Airport lies in the city center, southwards from Loop 202. The Gila River Memorial Airport is expected to serve the city in the future. Stellar Airpark is a privately owned airport which remains open for the general public. Most locals use Phoenix Sky Harbor International Airport for regional and international travel.

Cost of Living in Chandler

A meal at a restaurant may hover from $10 to $40 while a one-way transportation ticket may cost around $1.50. Monthly passes come for $25 approximately while basic utility costs hover around $157.23 every month on average. Rentals in Chandler can range between $1,000 and $2,500 every month.

Here are some useful tips for visiting Chandler:

Things to Do in Chandler

Chandler offers several fun activities and attractions for residents. Here’s taking a look at some of them.

1. What are the most popular things to do in Chandler?

Some of the popular things to do in Chandler include visiting the Chandler Center for the Arts, Chandler Fashion Center, Chandler Skate Park and Arizona Railway Museum along with the Wild Horse Pass Motorsports Park.

2. What are some free things to do in Chandler?

Some of the free activities and attractions in Chandler include the Veterans Oasis Park, Zelma Basha Salmeri Gallery, Desert Breeze Park, Merchant Square and Sibley’s West.

3. Does Chandler have many romantic attractions?

4. What are the most family-friendly things to do in Chandler?

5. What are the more unusual things to do in Chandler?

Unusual things to do in Chandler include visiting the Arizona Railway Museum and Desert Breeze Park along with the Wild Horse Pass Motorsports Park and Rawhide Western Town and Steakhouse among other well-known attractions.

Places to Visit in Chandler

There are several attractive destinations worth visiting in Chandler. They include the following:

Places to Eat in Chandler

Some of the best places to eat in Chandler include the Keg Steakhouse, Benihana, Firebirds Wood Fired Grill, P.F. Chang’s and Thirsty Lion Gastropub & Grill in tandem with Downtown Chandler Steakhouse and Hop Social Tavern to name only a few.

Street food in Chandler can be savored at numerous joints like The Brickyard Downtown, The Local Chandler, Chennai Fusion Grill, Chipotle Mexican Grill, Ghett’Yo Tacos, Burritos and Sliders, Moreno’s Mexican Grill and Jimmy John’s. There are many other popular street food joints that you will come across in Chandler.

Chandler has numerous shopping hubs including the massive Chandler Fashion Center, the second biggest mall within the Phoenix Metropolitan Area. You can also try outlets like T J Maxx, Macy’s, Nordstrom Rack, Home Goods, Target and Kohl’s among others. From boutiques and fashionable brand stores to delightful bargains, Chandler has a little of something for every traveler and every budget for that matter!

The Chandler Municipal Corporation is a general aviation facility with two runways and Stellar Airpark is another privately owned airport which remains open for the general public. Gila River Memorial Airport will be available for usage in the future while the Phoenix Sky Harbor International Airport is used by most residents for both international and regional traveling needs. Chandler offers limited bus services with local routes covered by two express buses and a new southern park and ride facility.

Chandler has Loop 202, the Santan Freeway, finished in 2006 and it goes through the heart of the city along the alignment on Pecos Road. Loop 101 or the Price Freeway, was finished in 2001, dividing the city from West Chandler. Interstate 101 is the westernmost border of the city as well. Ahwatukee is located towards the other side. Chandler has two branch single-track lines of the Union Pacific Railroad and one usually goes through the alignment on Kyrene Road while ending at the Lone Butte Industrial Park.

The other one runs eastwards of the Arizona Avenue while ending at Sacaton, Arizona. Commuter railway lines are being studied for further expansion possibilities as well. Light railway lines have not been approved for Chandler as of yet. However, several high-capacity corridors have been identified in other local and regional plans including light rail networks. City officials joined the Valley Metro Rail light rail authority in 2007 and are hoping for service sometime soon. Potential corridors that have been identified include Arizona Avenue, Rural Road and the Chandler Boulevard. The Chandler General Plan of 2016 does not provide authorization for light rail or other high capacity transit networks.