Staying in Delhi-NCR is synonymous with unique travel experiences while good serviced apartments will add a new dimension to the trip. This is why you should choose serviced apartments in Delhi NCR courtesy of TheSqua.re. We offer comfortable and spacious furnished apartment options that will cater to all traveling needs while offering the very best amenities and facilities.

Our apartments have been furnished with taste and care while they also offer easy proximity to major commercial and transportation hubs in the city.  Be it lengthy business trips or holidays, TheSqua.re is the best option for accommodation.

If you are looking for apartments Delhi-NCR, we have a range that are ideal for business or leisure. Short term rental Delhi NCR are available, if you are looking for a short stay. Offering diverse amenities like fully equipped kitchens, flat-screen televisions, free Wi-Fi, concierge services and room cleaning if available and private access, our fully furnished apartments are the best and most convenient solution for your Delhi NCR trip.

It always makes sense to opt for short term rentals in Delhi or serviced apartments in and around the National Capital. They are the preferred option for travelers and those shifting to the city initially. Serviced apartments are the best rental accommodation option in Delhi and NCR, offering more space, convenience and comfort with contemporary facilities.

Serviced apartments Delhi NCR take care of all aspects including legal, maintenance, deposit fees, agency charges, bills and maintenance costs. You will not have to worry about bedding, furnishing and accessories either. The apartments are usually located near transport connections including railway lines, metro stations and bus stops. Some apartments even have attractive onsite amenities such as swimming pools, gymnasiums and concierge services.

Guests are sure to find serviced apartments convenient options for enjoying the buzz of the city while staying in a desirable neighborhood simultaneously. Shifting to Delhi should not always be a troublesome affair. Being experts in serviced accommodation, we understand how guests require a second home in Delhi NCR with plush furnishings, welcoming interiors and attractive amenities. We also offer round the clock customer support for resolving all queries swiftly.

Corporates and business travelers often come down to Delhi-NCR which is home to some of the country’s biggest commercial hubs and leading companies. Whenever corporate guests require a place to stay, our corporate housing in Delhi NCR are the best options with their furnishings, plush amenities, free and high-speed Wi-Fi, flat-screen televisions, well-equipped kitchens and all other amenities. Work and play in style with our serviced apartments for company.

Many travelers land in Delhi for exploring the myriad landmarks and attractions of the city. With the likes of the Red Fort, India Gate and Parliament House in proximity, travelers will love the mélange of history and culture that is New Delhi and its surrounding regions. Which is the best accommodation option for their needs? Our Holiday apartments in Delhi NCR offer ample space for everyone in tandem with connectivity to major tourist landmarks and public transportation facilities. Our apartments also offer the best amenities and ample space and privacy alike.

Where to Stay in Delhi-NCR

Delhi NCR offers several prime residential neighborhoods for travelers which are also major commercial hubs in some cases. Take the example of Connaught Place, one of the city’s most iconic areas to stay, packed with shopping, dining and entertainment options galore. Other options include Karol Bagh, Greater Kailash, Saket, Paharganj, Mehrauli and Defence Colony among others. 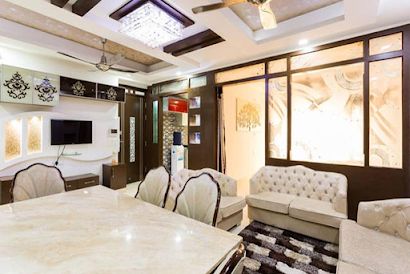 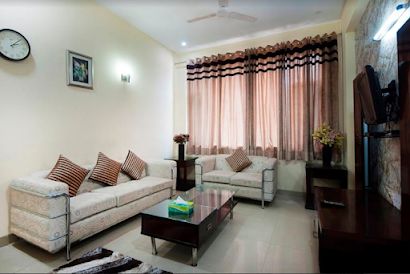 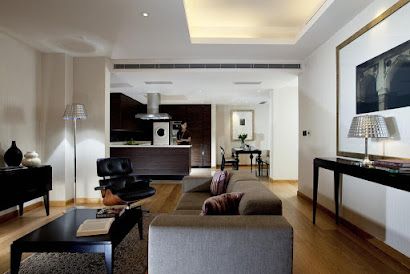 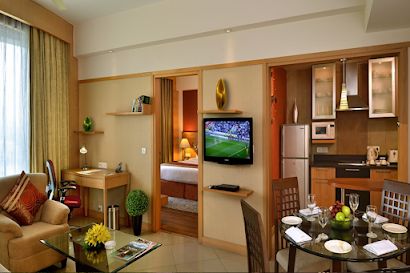 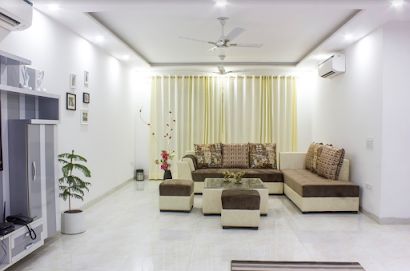 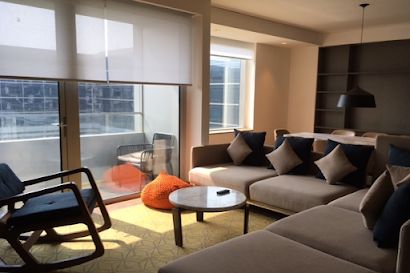 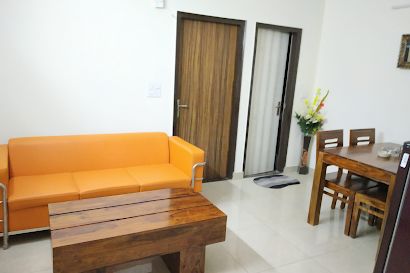 Things to know before booking serviced apartments in Delhi ncr

The NCT (National Capital Territory) of Delhi is a union territory and capital city of India, adjoined by Haryana and Uttar Pradesh. Delhi covers 1, 484 square kilometers and the urban area includes neighboring satellite cities like Gurgaon, Noida, Faridabad and Ghaziabad.

This makes it the NCR (National Capital Region) with more than 26 million residents. It is the second biggest urban area in the world as per the United Nations’ estimates. Here are some key facts about Delhi and NCR:

Delhi is India’s second wealthiest city after Mumbai, being home to 18 billionaires and a whopping 23, 000 millionaires as well. The National Capital has the second highest GDP per capita in the country.

Cost of Living in Delhi and NCR

Delhi NCR living costs hover between Rs. 4,000 and Rs. 30,000 depending upon the number of people and type of living unit. This is the rental cost per month while groceries cost around Rs. 1-10,000 monthly.

Transportation costs anywhere around Rs. 600-5,000 every month while utilities will hover between Rs. 600 and Rs. 5,000 on average. Bachelors can reasonably live in Delhi-NCR on Rs. 15-20,000 per month while it increases considerably for families.

Here are some handy tips for visiting Delhi and NCR:

Things to Do in Delhi-NCR

Delhi-NCR comes with a plethora of things to do for travelers. Here’s taking a look at some of them.

Free things to do in Delhi-NCR include visiting the Lodi Garden and India Gate, venturing to the Hauz Khas Complex, enjoying Qawwali at Nizamuddin Dargah, tasting the Langar food from Gurudwara Bangla Sahib and meditating at the Lotus Temple.

Unusual things to do in Delhi-NCR include listening to Qawwali at Nizamuddin Dargah, visiting the Haveli of Ghalib at Ballimaran, enjoying Tibetan food at Majnu Ka Tila, volunteering at Gurudwara Bangla Sahib and visiting the Sulabh Museum of Toilets.

Places to Visit in Delhi And NCR

Here are some of the best places to visit in Delhi And NCR:

Places to Eat in Delhi-NCR

Delhi-NCR is home to numerous top restaurants offering almost every type and style of cuisine. Berco’s offers lip-smacking Thai and Chinese dishes while Olive Bar & Kitchen rustles up tasty food with an island-esque décor vibe and open air seating. Other favorites include the likes of Farzi Café which harnesses molecular gastronomy, the regal Indian Accent and Mamagoto, the iconic Pan-Asian restaurant. Delhi is home to India’s best restaurant brands.

Shopping in Delhi And NCR

The Indira Gandhi International Airport is the main airport for the Delhi-NCR while another international airport is coming up at Jewar in Noida. Delhi-NCR has several National Highways and major thoroughfares passing through it along with an extensive bus network run by DIMTS, DTC and others.

The Delhi Metro offers a vast transportation network, covering Delhi, Gurgaon, Ghaziabad, Noida and Faridabad. There is the Northern Railway network encompassing multiple stations in Delhi along with the Delhi Suburban Railway network as well. Delhi-NCR also has a comprehensive network of auto rickshaws, cabs and other public transportation facilities.

Delhi-NCR has a humid and cloudy wet season while the dry season is mostly clear and on the warmer side. Throughout the year, temperatures usually hover between 46 and 103 degrees Fahrenheit. Minimum and maximum temperatures usually stand at 42 and 110 degrees Fahrenheit. The best time to visit Delhi-NCR is between late March and mid May and also between late September and late October.