Dubai is one of the world’s most unique destinations - a modern metropolis on the coast of the Arabian desert. In Dubai, luxury and modern convenience take precedence over historic charm, with the various hotels and resorts offering untold amenities and innovations to improve guests’ experience. However, the ultimate experience of the city is to be found in its private accommodation and thesqua.re’s selection of serviced apartments in Dubai showcase some of the finest and most luxurious properties available.

Our Top Fully Furnished Serviced Apartments in Dubai include:

Each of these serviced apartments in Dubai offers all the convenience of a hotel, such as room cleaning and reception, but with the addition of full kitchen facilities and the latest home entertainment - making them perfect for anyone making an extended stay in Dubai. Enquire now for the perfect stay in our furnished apartments in Dubai.

Where to Stay in Dubai

Where to stay in Dubai presents a different challenge than European cities. Dubai covers a huge area - some 4,110sq kilometres, which for perspective is about 7 times the size of Madrid. While this may sound daunting to anyone choosing a location to stay in the city, it should be remembered that despite its large size, most of the famous landmarks and important economic areas are to be found in just a handful of districts.

For Example, the Marina and Jumeirah Beach are the most popular places for tourists, offering golden beaches and exclusive bars and restaurants. The area is also more socially relaxed compared to the more conservative areas of the city. Alternatively, Downtown is also seen as one of the best areas to stay, as this is where many of Dubai’s iconic landmarks are to be found, including the Burj Khalifa - the world’s tallest building - and Dubai Mall. The inclusion of the latter also makes Downtown something of a shopper’s paradise. A location that is particularly important for business travellers is Business Bay and Dubai Canal, a huge and ongoing commercial property project which is home to several global and domestic firms.

For an alternative experience of the city, Bur Dubai offers a glimpse of the past, with warren-like souks and historic buildings it is a stark contrast from the megastructures of the Marina and Downtown. Similarly, Deira is also part of the old town, but gradually modernises towards its eastern limits.

Finally, when choosing any location in Dubai, it is important to thoroughly research the different areas to find the most suitable. Whilst there is an abundance of transport options, it should be considered that some of the city regions are up to 50 kilometres apart and can only be travelled between using public transport or taxi services. 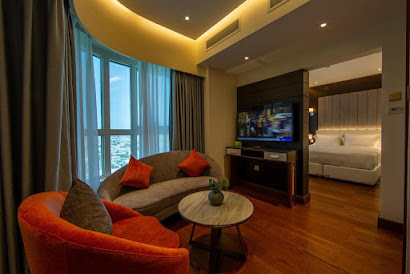 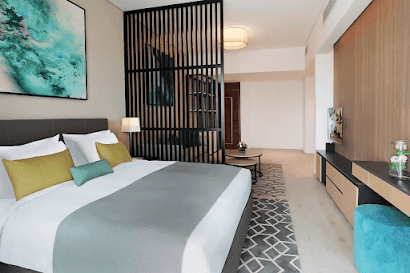 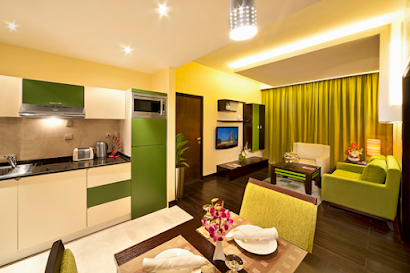 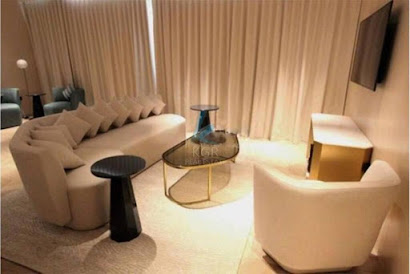 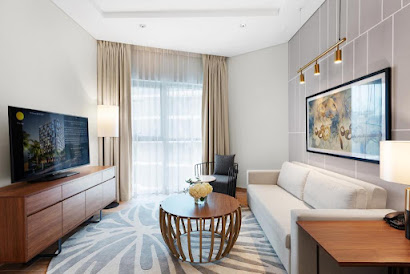 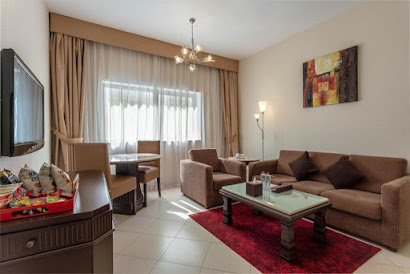 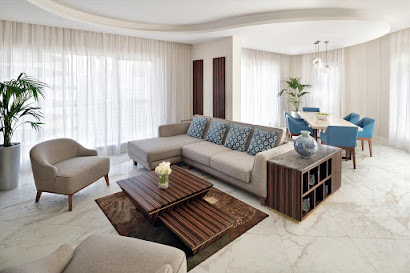 Things to know before booking serviced apartments in Dubai

Dubai is an utterly unique destination that boasts a level of modernity and luxury that few other cities can match. The development of the city in the latter half of the 20th century is one of the most impressive and large-scale infrastructure projects ever carried out - and it is still going on. The city is notorious for its ambitious architectural projects - being home to several of the world’s top 50 tallest buildings.

Below are a few more intriguing facts about this incredible city of Dubai:

Dubai also has an incredibly fast-growing economy and - contrary to popular belief - only 5% of the city’s revenue comes from oil. The local authorities have invested huge amounts into hotels and real estate, focusing on tourism to fuel GDP - which now stands at over $40,000 per capita. Dubai is also a major exporter of gold, diamonds and jewellery.

Things to Do in Dubai

Dubai is more or less a paradise for tourists. The city has invested huge amounts in its amenities and attractions, as well as luxury hotels and accommodation. This means the city offers an abundance of things to see. The sheer diversity of options can leave first-time visitors wondering how to make the best of their time.

Q: What are the best things to do in Dubai?

A: Dubai offers many diverse activities, ranging from adventure sports to luxurious fine dining. The beaches have numerous watersports on offer, as well as stylish bars and party spots. Of course, Dubai is also famous for its incredible shopping - with the malls and plazas being tourist attractions in themselves.

A: Dubai is an important global commercial and financial hub that welcomes millions of business travellers every year. As such, the central business district boasts plenty of opportunities to unwind. Many of the city’s famous landmarks are nearby and there are numerous restaurants and bars for socialising. Those looking for something active will also find plenty of fitness and sporting facilities in the Business Bay Station vicinity.

Q: What are some free things to do in Dubai?

A: Exploring Dubai’s rich cultural heritage is a great way of getting to know the city. An afternoon in Al Shindagha will reveal plenty of exhibits showcasing ancient artisanship and demonstrations of pearl diving and best of all, it’s completely free. Alternatively, several major attractions in the city offer free entry at certain times of year.

Q: Are there family friendly activities in Dubai?

A: Dubai offers numerous family-friendly activities. There are plenty of great learning experiences to be had across the city’s rich variety of museums and galleries, as well as demonstrations of local crafts throughout the old city. Alternatively, for something more active, there are plenty of theme parks, adventure playgrounds and water parks to enjoy.

Q: Are there many popular excursions from Dubai?

A: Aside from its skyscrapers, Dubai is famous for the excursions it offers. Desert safaris are extremely popular during the cooler months and can be experienced by 4x4 or camel. There are also more adventurous options, such as sand boarding or dune buggy racing. Alternatively, cruises can be arranged to experience the incredible marine life and views of the city from the water.

Places to Visit in Dubai

As with any other city, Dubai has plenty of must-see locations. However, given the huge area the city covers, it is always advisable to build an itinerary before travelling to the city.

Below are some of the essential points of interest and iconic landmarks that most people associate with Dubai:

Places to Eat in Dubai

Dubai is one of the top destinations in the world for food lovers, with millions of tourists visiting the city simply to enjoy its fantastic range of cuisines. The city also holds numerous food festivals throughout the year and is famous for innovating and blending modern and traditional dishes from around the globe. Dubai has a particularly rich offering of fine dining establishments, with Trèsind Dubai, STAY by Yannick Alléno, Teatro and Eauzone being amongst the most popular. There are also many world cuisines on offer, from Japanese cuisine at Tomo and Minato, to Pushkin Russian Restaurant and even Uzbegim Restaurant, which offers traditional Uzbeki cuisine. In fact, visitors will find they can pick any country on the map and find it’s food represented in Dubai.

Of course, there are also plenty of restaurants that specialise in authentic local cuisine. Al Khaima, Wafi Gourmet and Ewaan offer a great selection of Arabic dishes, whilst Khaymat Al Bahar and Al Nafoorah specialise in Lebanese cuisine.

As a major city in a nation that has a rich Bedouin tradition, it can be of little surprise that Dubai offers a fantastic array of street food vendors. Al Mallah, Ortego’s Grill, Firas Sweets, and the Pars Iranian Kitchen are some of the more well known street-food style establishments, but there are also numerous streets and neighbourhoods that offer a huge selection of street food vendors. These include the Meena Bazaar area of Bur Dubai, 2nd December Street and Al Karama.

Most people will be aware of Dubai’s reputation as one of the world’s premier shopping destinations. The city has entire neighbourhoods that are filled with flagship designer stores and fashion boutiques. The Dubai Mall is without a doubt the number one place for shopping in the city, with over 1,200 retailers housed in its incredible four-storey interior. Al Fahidi Street is the place to go for electronics goods, whilst the pavilions of the Global Village house specialist retailers from countries around the world.

Dubai has a comprehensive and diverse transport infrastructure that covers every part of the city. Whilst it may have made headlines recently for promising to deliver drone taxis, most visitors will find the city’s network of buses, water buses, monorail system, tram, and the Dubai metro are more than enough for their transport requirements. The Dubai Road and Transport Authority operates most of the buses, water taxi and metro services, which can be paid for using the Nol card - similar to London’s Oyster payment system. The Dubai Metro is a state-of-the-art driverless system, with 49 stations in the key areas of the city. These include:

Dubai also has plenty of taxis, which are regulated by the RTA and very cost effective when compared to those in other major cities.

Due to its desert location, Dubai unsurprisingly experiences a lot of sunshine. Typically there is very little rain and temperatures remain high year round. August is the hottest month on average, with temperatures known to exceed 40 degrees Celsius. January is the coldest, with an average temperature of around 20 degrees, whilst February is the month most likely to see rainfall. Typically the best months to visit Dubai are between November and March, as this avoids the hottest months of summer.