What’s on in Geelong

As Victoria’s second largest city, Geelong is often overlooked as a destination. However, in recent years it has seen an influx in visitors wanting to take advantage of its temperate climate, huge range of cultural attractions and its ideal location between sprawling bushlands and stunning coastline. Whether you are looking to enjoy city life, trek through the wilderness or try your hand at some surfing, Geelong is a city on the move and offers visitors the chance to explore a less touristic Australian city as well as incredibly diverse natural landscapes.

Where to stay in Geelong

Geelong is a modern Australian city and, as such, it offers an extensive selection of places to stay. The city is particularly notable for its selection of serviced apartments - which can be the best solution for those making an extended stay in the city, as they offer an enclosed private space with kitchen facilities and secure access. Whether you are looking for a small studio or larger corporate housing in Geelong, Thesqua.re can find the perfect property for you - having been selected according to our exacting criteria and exhibiting the highest standard of decor, mod cons and services.

What to do in Geelong

Geelong offers myriad cultural, historical and natural attractions which make it almost impossible to see everything in one trip alone. How you choose to spend your time will depend on your interests, but Geelong is sure to meet you expectations as well as throw in a few surprises of its own.

The city is known for having an electrifying social scene, with some of the best night spots in the region, as well as a plethora of options when it comes to dining out. Coupled with plenty of daytime activities - ranging from extreme sports to informative walking tours - the city offers entertainment 24/7.

It is also particularly noteworthy as a destination for those who enjoy natural attractions, as it not only features miles of coastline, but is also just a short journey from sprawling forestlands. Visitors can therefore enjoy watersports, head out on a boat trip to explore marine life, or venture out on a hiking trip into the hills to experience Australia’s stunning natural wonders.

Tips for staying in Geelong

There are plenty of great places to eat in Geelong, with every imaginable cuisine on offer. On the waterfront, there’s places like Geelong Boat House, Wah Wah Gee and King George Fish and Grill, all serving innovative menus from fresh seafood, whilst further inland there’s also plenty to choose from, with Bistrot St Jean, Restaurant IGNI and Empire Grill all serving a range of European and Australian dishes.

There’s plenty of retail opportunity in Geelong, much of which is concentrated on or around Malop Street. Westfield Geelong is arguably the main shopping centre in the city, boasting a selection of some 185 shops and services, ranging from designer fashions to consumer electronics. There’s also Market Square Shopping Centre, which combines with Westfield to make the Geelong Shopping Complex and contains numerous specialist retailers.

There’s plenty of attractions in Geelong - especially for those who are looking to explore the history of the city. The Old Geelong Gaol is now a museum, documenting the country’s past as a penal colony, whilst the National Wool Museum is a fascinating glimpse into one of Australia's early economic successes. Those who enjoy open spaces can take a stroll through The Friends of Geelong Botanic Gardens or Eastern Park, with its grounds overlooking the waterfront.

Geelong is covered by an extensive public transport network comprised of train and bus routes. Buses run to all the city suburbs, including Waurn Ponds, Marshall and South Geelong, whilst the local rail station also offers fast services to Melbourne, as well as daily services to services between Lara, Corio, North Shore and Marshall. The city’s compact layout and coastline also make it a fantastic place to explore by bicycle, which can be rented locally at little cost.

Geelong has a growing economy that is largely driven by manufacturing, retail and health services. Barwon Health, NDIS and Target are some of the major employers in the city, along with manufacturing firms such as Hanlon Industries, Onesteel and Backwell IXL. There are also several prominent financial services firms headquartered locally, including Geelong Financial Group and Muirfield Financial. 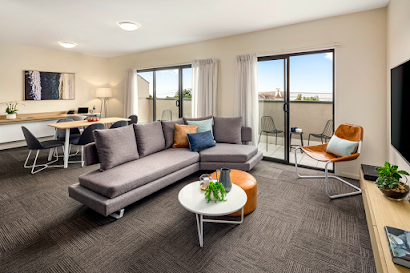 Things to know before booking serviced apartments in Geelong