Located in south London, Battersea apartments are the ideal location for staying on your trip to London. Each serviced apartment contains a stylish living space, a comfortable bedroom, and a fully equipped kitchen. The name Battersea is synonymous with a couple of things. One is arguably the world’s most famous dog and cat rehoming centre which is now simply branded as Battersea. The other is the iconic Battersea Power Station, an exemplary example of architectural design and the main feature of an infamous seminal album cover by the band Pink Floyd.

This is perhaps why the redevelopment of this previously dismissed area of south west London on the side of the River Thames has largely gone under the radar.

Modern Battersea has risen from the ashes of the industry that disappeared here in the 1970s, and with the redevelopment of the power station finally coming to an end, the last piece of the puzzle is almost in place.

Almost, because the one thing Battersea lacks is its own tube station. This is to be remedied by the Northern Line extension and two new stations opening in 2021, Battersea Power Station and Nine Elms. Before that time, this is still worth considering as a destination for work and for leisure.

Here are a couple of serviced apartments in Battersea to consider:

Properties like this from TheSqua.re come with home comforts as standard. Some even come with upgraded services such as 24-hour concierge, parking facilities or even gyms.

Speak to the reservations team about specific needs. 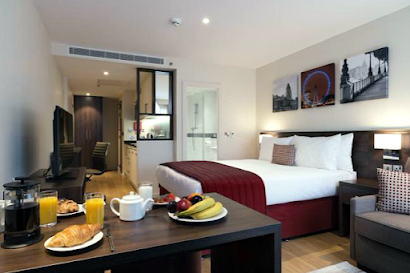 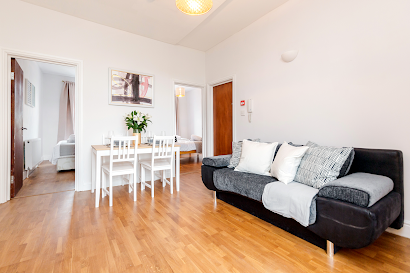 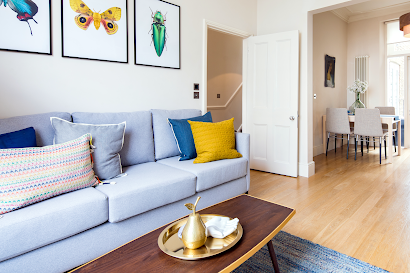 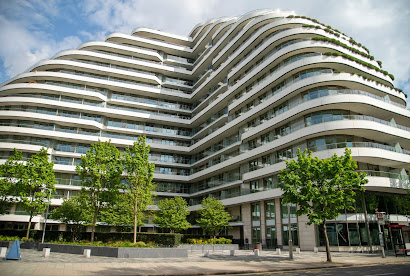 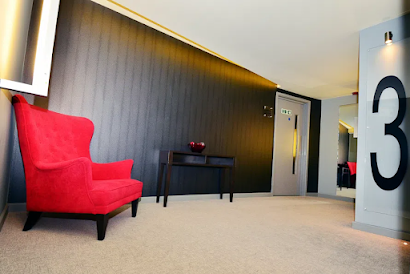 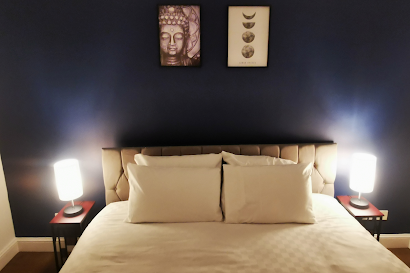 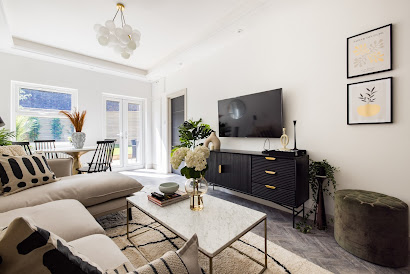 Battersea may not have a tube station, but the options for travelling into London are still pretty good. It’s only 3 miles from Charing Cross and is served by nearby train stations including Clapham Junction, the busiest train station in Europe which provides lots of travel options.

There’s more of a residential feel to Battersea which makes it an attractive base for escaping from London’s business districts, whilst still being within easy commuting distance. Apartments are always situated near to public transport links.

These reasons make Battersea an attractive proposition for corporate accommodation. However, the serviced apartments in in Battersea themselves are also an attractive option for business travellers for a number of reasons.

Every one of the serviced apartments in Battersea offered by TheSqua.re comes with all the mod-cons of a modern home as well as the often forgotten standard features, such as a space to relax in and a fully equipped kitchen in which to prepare meals, or even entertain.

London may be recognised as one of the world’s most important business hubs, but it is also one of the most popular holiday destination cities in the world, and has been for a very long time.

London has a rich history and is packed full of landmarks and attractions which tell its story. There’s so much to see and do, tourists are spending increasingly lengthier periods of time on their vacations. Fortunately, serviced apartments in Battersea offer the perfect holiday accommodation for longer term stays.

First of all, TheSqua.re has selected them as the very best properties in the area. Secondly, they are equipped with all the mod-cons that a traveller would be expected to have in their own home. A fully equipped kitchen area for example. Standard in any home but in holiday accommodation this is an added bonus which gives people the opportunity to self-cater, or even entertain.

Properties are also chosen for their locations. Battersea is a fantastic choice given its proximity to so many of the major landmarks of London. It also offers great access to public transport networks which make it easier for people to get to these sights.

Where to Stay in Battersea

Battersea is just a stone’s throw away from the bright lights of Central London. It’s also close to more upmarket areas of the city such as Chelsea, which is just the other side of the river.

The South Bank of the Thames was criminally under-utilised for many years and much of it fell into disrepair from the 1970s onwards. In recent times, however, this trend has been reversed and some of the most sought-after properties in London now sit on the South Bank, looking over the long-established centre part of the city.

Battersea has been one of the last on the list of places due for development, much of which has been blamed on the long overdue redevelopment of the power station area and the expense of putting in a much needed tube station. Both issues now well on the way to being solved.

The transport situation is actually very good. The busiest train station in London, Clapham Junction, is actually in Battersea. Planners just wanted it associated with Clapham, which was the much more desirable area at the time.

Battersea has long been a more affordable part of London, especially for those that couldn’t afford to live in nearby Fulham or Chelsea.

Battersea is a place which has long been associated with a dog’s home and a power station. An association which will probably long continue. However, there are a number of other fascinating things to know about Battersea.

Cost of Living in Battersea

Prices in Battersea have always been at the cheaper end of the London scale. The main selling point of Battersea was that it was within easy reach of the more desirable areas of Clapham, Chelsea and Fulham, but that it was a far cheaper place too live.

Naturally, as the desirability of Battersea increases, the cost of living goes up too.

Prices for buying and renting in Battersea are on the rise. When the tube stations open in 2021 these are expected to rise even more. Renting serviced apartments in Battersea from TheSqua.re is not only the cheapest option, it is also the simplest. Renting an apartment in this way is far simpler than a short term lease in the traditional manner.

Some good news for the wallets of people living in Battersea. As it’s located within the London Borough of Wandsworth, they enjoy the cheapest council tax of anywhere in the capital.

A stay in Battersea may be a stay on the south side of the river, but it’s close enough to feel like being in the heart of London, which means staying in one of the most cosmopolitan and diverse cities in the world.

There’s something to see on every corner it seems and for many, the sheer scale of the things they ‘must’ see can be overwhelming. It’s important to get the most out of a stay in London and Battersea. Here are a few tips.

Things to Do in Battersea

Battersea may be just outside of what’s known as Central London, but that doesn’t mean it’s not a destination in its own right. There’s plenty to see and do in Battersea, and when those things are exhausted, it’s close enough to see the rest of London too.

Q. What are the most popular landmarks in Battersea?

There’s a couple of obvious ones and some not quite so obvious. All are worth at least a photo op.

Q. What are some free things to do in Battersea?

Free is good, especially in a city like London where a day out can end up costing the Earth. Here are a few things to show it doesn’t have to.

Q. Are there many excursions to be had from Battersea?

Of course, there are! Battersea isn’t still an island and it provides great access to the rest of London. It also provides easy options to get to landmarks outside of the city too.

London Victoria is the very next station on the mainline rail and not only does that provide trains to the south, it is also home to London’s largest coach station. This provides access to cities all over the UK and beyond, making a day trip to Oxford, Brighton or Cheltenham a possibility.

It is also possible to get a coach to nearly every one of the UK’s major cities for longer term stays as well as Paris, Brussels, The Hague and many major cities of Europe.

Q. What are the most family-friendly things to do in Battersea?

Battersea is a place for families, the open green spaces are testament to that. Battersea Park is stunning and frequently tops the list of why people who live in Battersea love the area. It has water fountains and sculptures as well as a children’s zoo. It’s also the chosen venue for many an art exhibition and antique fair.

Battersea Dog’s and Cat’s Home is also a possibility. Visitors are welcome but there is the added danger of falling in love and making a stay in London much more complicated for life in the long term!

Places to Visit in Battersea

A stay in Battersea for leisure travellers needn’t mean a constant back and forth to and from London to see the sights, using the apartment simply as a base camp. Battersea and the surrounding area have a few places to visit themselves.

Places to Eat in Battersea

Battersea eateries on the whole are pretty reasonable price-wise, especially when compared to the prices charged at some Central London restaurants. However, its close proximity to Chelsea and Fulham does mean it has its fair share of more upmarket places for a meal out. Here’s a selection that covers the spectrum.

Taking a train into Central London and all of the shopping centres it offers is simple. Here are some of the best shopping destinations around Battersea to satisfy any retail craving.

As previously mentioned, Battersea is probably one of the best linked places south of the river which doesn’t currently have its own tube station. This will be rectified in 2021 with the opening of Nine Elms and Battersea Power Station underground stations.

Battersea’s fantastic links are largely thanks to its proximity to mainline networks at London Victoria station and Clapham Junction station, the latter actually being located in Battersea. Stations to consider include:

London weather is similar to the patterns seen in Western Europe. Winters are fairly cold, especially at the end of January and the beginning of February but at these times it is generally a couple of degrees warmer than the rest of south east England.

Even when London is cold and rainy there are still plenty of events taking place and plenty to appreciate that is indoors.

Summers are generally warm with the occasional very hot day which are perfect for enjoying the city’s many parks and al fresco dining and drinking options. When the rain inevitably comes it’s always best to do what the British do, find a pub and wait it out. Battersea has plenty off options in that regard.