Serviced apartments in Ealing are perfect for short and long stays in London. Whether you are travelling for business or leisure, our apartments include all the amenities to make you feel at home. Just eight miles from Charing Cross, Ealing is a bustling urban district that offers its unique atmosphere whilst still being very much a part of London. Ealing is known as something of a retreat for those who wish to enjoy small-town life whilst still being less than thirteen minutes away from London Bridge by train. This short commute, combined with Ealing’s excellent range of services and amenities, has led to the area becoming extremely popular with business travellers. Whilst there is an abundance of hotels and guest houses available for those looking to stay in Ealing, corporate travellers often find these are less than ideal for their needs. Instead, more and more are turning to serviced apartments - private lets that offer a private space in which guests can both work and relax.

These properties offer everything the business traveller could require - including high-speed Wi-Fi and a flat-screen TV. However, they are also perfectly suitable for tourists who enjoy having their own space. The inclusion of a fully equipped kitchen also means they are a great option for those who prefer to self-cater. 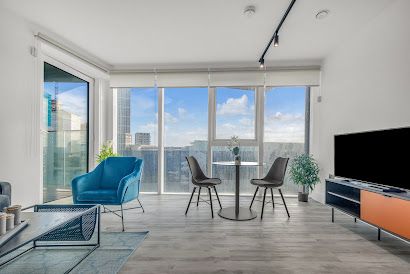 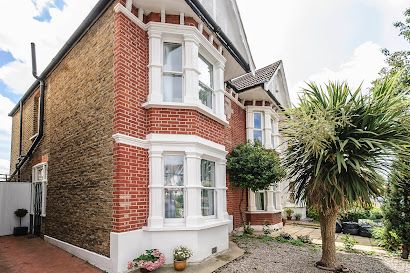 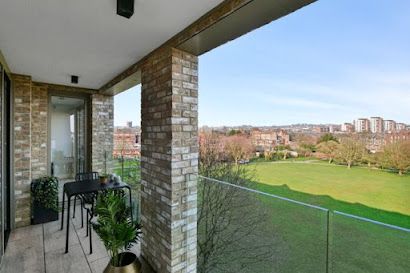 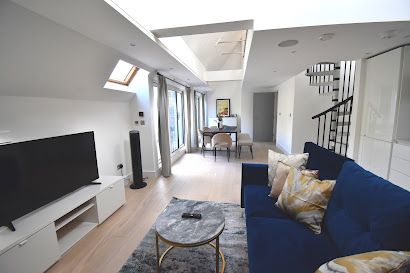 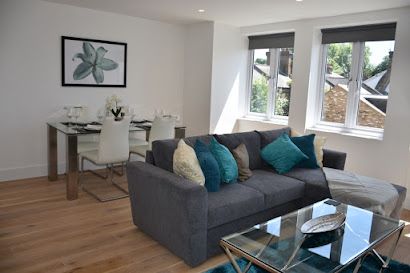 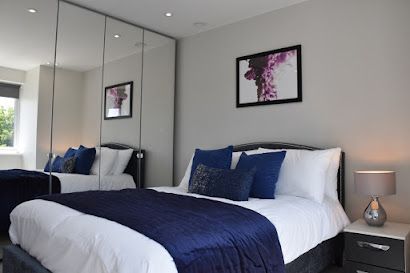 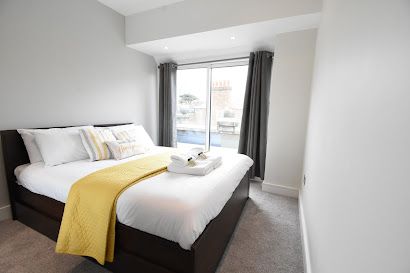 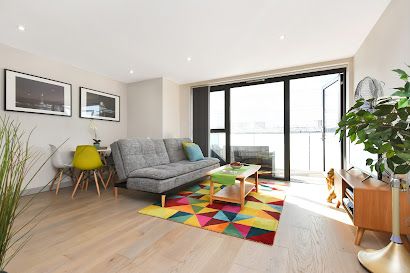 Apartments on Singapore Road in Ealing

More and more people are discovering the benefits of serviced apartments - from tourists looking for a long weekend away, to corporate travellers expecting to spend several weeks in a given location. Each private property offers a much higher level of comfort and convenience than can be expected from the average hotel chain, offering a comfortable living space, with luxurious soft furnishings and tasteful decor. Aside from offering a more home-like environment, serviced apartments also offer additional services that are often associated with traditional paid accommodation, such as room cleaning, reception, and even on-site leisure facilities where available. Finally, TheSqua.re’s range of serviced apartments in Ealing are selected according to the desirability of their location - meaning guests are never far from key amenities and transport links.

Being so close to London and boasting such a comprehensive range of options when it comes to transport links, Ealing has inevitably become a popular place to stay for those making business trips to the capital. With this in mind, TheSqua.re has selected a range of corporate accommodation in Ealing with features and conveniences which are specifically intended to support the business activities of the corporate traveller. Each property is not only close to all the major stations and transport links, but also offers the perfect base of operations - with a study/recreation area, high-speed Wi-Fi, and flat-screen TV. They also offer a much greater degree of privacy than a hotel or guest house, making them perfect for relaxing after a hard day in the City.

Ealing is not only a popular spot with business travellers. The district is part of London, but its position to the northeast of the city also makes it perfect for travellers looking to explore other UK cities such as Oxford or Winchester, as well as Areas of Outstanding Natural Beauty such as the Chiltern Hills or North Wessex Downs. Luckily, serviced apartments also make the perfect holiday accommodation in Ealing - especially for those visiting with families or small groups. Having a private space with an additional living area offers a much more pleasant experience than being limited to a single hotel room and the addition of kitchen facilities also means that guests have more options when it comes to dining.

Where to Stay in Ealing

Ealing is filled with countryside spaces and modern buildings along with shops and shopping malls. There are also many Victorian houses and leafy green landscapes that are quite pricey. But tourists can opt for serviced apartments at Ealing at some of the best locations like Northfields, Ealing Broadway, West Ealing Station, West Ealing Train Station, etc.

Cost of Living in Ealing

Another advantage of Ealing is that the cost of living is generally a little cheaper than in other London districts. Whereas rent in central London can exceed £3,000 per month, a one-bedroom and a 3-bedroom apartment can be found in Ealing for £1,300 - £2,500. An advantage of serviced apartments in Ealing is that they offer more cost efficiency the longer a guest stays - not to mention they also offer additional services, including room cleaning, which in itself can save both time and money.

Whilst rent is the biggest expenditure, there are of course other costs to consider. When it comes to socialising, bars and restaurants are generally cheaper in Ealing than elsewhere in London, with the price of a meal for two being around £47 - £60 at a mid-range restaurant. For the health-conscious, a gym membership will cost approximately £55 per month. The other cost to consider is travel - which will, of course, vary dramatically on the distance and number of journeys taken. Ealing falls under London fare zone three and a travel card for the city can be purchased for £200 for a month. A one-way ticket can be as cheap as £3.60.

Staying outside of London city centre offers many benefits, whilst many people will be savvy regarding life hacks in the capital, some will be less sure of what it’s like to live in one of the boroughs. With this in mind, what follows are a few tips for visiting Ealing, to help first-timers get the most out of their stay.

Things to Do in Ealing

Ealing’s location on the outskirts of Greater London means it offers an incredibly diverse range of options when it comes to finding things to do. Those staying in the borough can make a short journey to enjoy both urban and rural attractions, or explore the myriad entertainment and leisure facilities in Ealing town itself.

What are the most popular things to do in Ealing?

Ealing has all the attractions and facilities one would expect to find in a vibrant and successful town, from world-class leisure facilities to a range of exciting social hubs. A few of the top things to do locally are:

What are some outdoor activities in Ealing?

Ealing is known across London for its abundance of parks and outdoor spaces - making it the perfect location for those who enjoy being outdoors. There are several large parks in the vicinity, as well as smaller gardens and nature reserves. Some popular spots include:

Are there many excursions to be had from Ealing?

Ealing is the perfect location from which to enjoy a few day trips. Of course, London, with its wealth of iconic attractions, is just a few minutes away by tube. However, it is also possible to make trips to both Winchester and Oxford - both of which offer a very different but equally rewarding city experience.

What are some free things to do in Ealing?

Ealing has a few options when it comes to free activities. When the weather is good, there are plenty of parks and gardens to explore - most of which are free to enter. The Open Ealing arts centre also holds several free events throughout the year - though visitors are advised to check the calendar online to be sure of prices. Finally, the Questors Theatre also has several shows a year when attendance is based on a voluntary donation.

Places to Visit in Ealing

Many visitors to Ealing will be surprised by just how much there is to do in the surrounding vicinity - without the need to head into London proper. Thanks to its location, anyone staying in Ealing can enjoy the sights of the city as well as those hidden away in the suburbs. A few suggestions are:

Places to Eat in Ealing

Ealing may not be known as a haven of gastronomy, but visitors will be pleasantly surprised to find that the borough is something of a hidden gem when it comes to dining out. Just about every flavour imaginable is represented: from classic European dishes to avant-garde oriental cuisine. Below are a few of the most popular places to eat in Ealing:

Ealing town centre has an excellent high street with plenty of famous brands and services on offer. In fact, the Ealing Broadway Shopping Centre is one of the best shopping plazas outside of London city centre and boasts over 80 retailers. There’s also an excellent selection of larger stores, including supermarkets and outlet stores, in West Ealing. However, another great thing about shopping in Ealing is that there are several other large-scale shopping centres within easy reach. These include:

The zone 3 borough of Ealing is extremely well connected when it comes to public transport, meaning anyone staying in the area has plenty of options when it comes to getting around. For travelling around Greater London, away from the city centre, many people opt to take the bus. Ealing has some 47 routes operating locally, several of which operate at night. For journeys in the city centre, the London Underground has usually considered the most convenient means of transport - especially as Ealing has some 14 different tube stations. Some stops of note are:

Journey’s via public transport can be paid for with the Oyster card, which offers lower rates than traditional payment methods, with single Zone 1 journeys being just £2.50. The cards can be purchased online, in newsagents, and at most transport for London stations.

Finally, whilst driving in London city centre is not advised due to congestion, Ealing has less traffic on its roads and hiring a car is a good idea for anyone looking to travel beyond the boundaries of Greater London.

One of the best months to visit the town is between May to September. The weather in Ealing varies greatly. The temperature is consistently cold for half the year while the rest of the year is snowy or rainy. January, February, and August are some of the busiest months in Ealing. The hotel and flights cost higher during these months as there is a high demand for a comfortable space. People are unlike to visit in October, therefore, it is the least expensive time of the year.

Cost to Stay in Serviced Apartments in Ealing

Ealing is identified as a major metropolitan centre in the London plan. It is a district in West London which is a part of the London Borough of Ealing. Ealing is an ancient area of Middlesex and was named “Queen of the Suburbs” during the early 20th century. The bustling city centre of Ealing is named ‘Ealing Broadway’ which consists of a major railway interchange and a shopping complex. Being located near the biggest airport in the UK, Heathrow, Ealing is a location of high demand among the residents. Ealing also offers great education with well-reputed universities like the University of West London is situated here. The cost to stay in Serviced Apartments in Ealing is moderate to high. The Ealing Esquire, Parkside Loft, Walpole Wander, Campanula and Down to The River are some of the best properties of Ealing. The Ealing Esquire offers one of the cheapest rates at £192 per night whereas Walpole Wander offers premium services at £350 per night.