Whatever the reason for visiting London, serviced accommodation is one of the best ways of spending one’s nights. With an abundance of excellent locations in some of the most popular travel destinations in the world, all furnished apartments from TheSqua.re guarantee comfort and convenience for the guests that choose them. Functioning as self-contained homes away from home, the apartments boast plush interiors and all the modern amenities a visitor could require, and TheSqua.re also meticulously selects all its accommodation based on a range of criteria, so residents are sure never to be too far from local attractions or public transport hubs. A hub of global transactions and the financial centre of London, the City of London boasts plenty such apartments within its boundaries, perfect for that busy business traveller or discerning tourist.

Some of the best serviced apartments near the Financial District include:

Offering a range of modern facilities and services, including private access, built-in kitchen units, high-speed Wi-Fi, and room cleaning and concierge where available, these luxury accommodation options are growing increasingly popular among both long term and short term guests looking for residence in and around the City of London. Whether coming or going, TheSqua.re guarantees restful and relaxing nights for all guests, with a unique human touch to keep them coming back to the Financial District time and time again.

Contact the reservations team at TheSqua.re today to book one of our serviced apartments near the Financial District, or browse more accommodation options here. 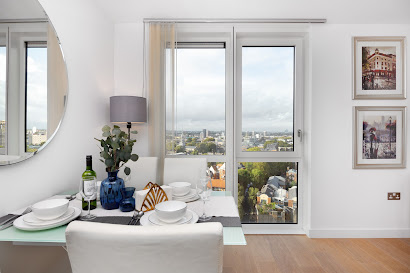 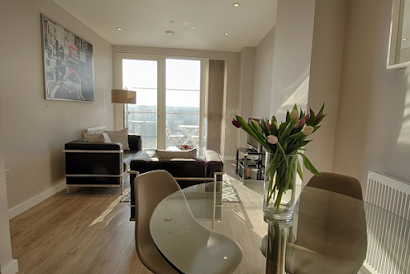 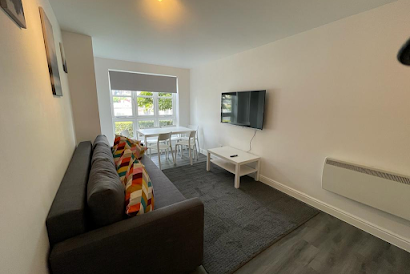 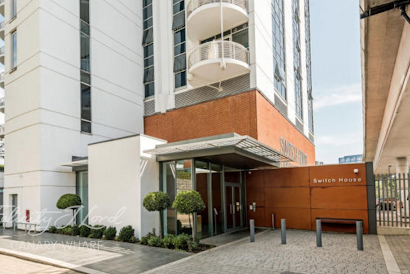 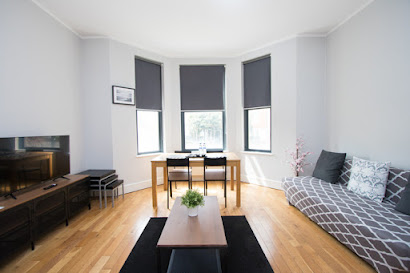 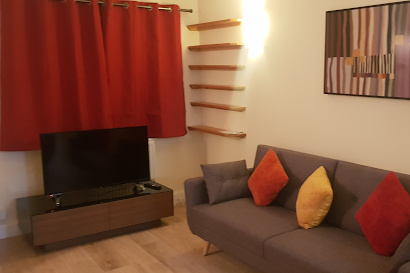 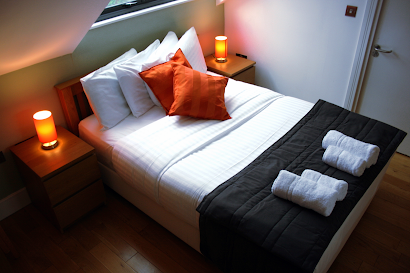 Corporate Accommodation in the Financial District

Located in the transactional and commercial heart of the capital, serviced apartments in the City of London and Financial District come highly sought-after by business travellers and sole traders. Commuting to the office takes just a matter of minutes on foot, and even journeys into the wider city are easy thanks to the numerous TFL services that run from stations in the area. Flexible, efficient accommodation options for those with a busy schedule, all corporate apartments from TheSqua.re are designed with their guests in mind, with their fully-equipped kitchens, flatscreen TVs, complimentary Wi-Fi and much, much more, so even the busiest business resident can unwind after a long day. Make the most out of that business trip and maximise profits with TheSqua.re.

Holiday Accommodation in the Financial District

The Financial District is also an excellent location for savvy travellers looking for a long-awaited leisure retreat or family holiday. Its fantastic location and number of popular local attractions means residents do not have to look far for things to see and do, and many of the great photo opportunities associated with London are eminently walkable. Holiday apartments in the Financial District are therefore perfect in this regard, and can accommodate for both quiet evenings in and nights on the town, thanks to their home-cooking and entertainment facilities. Plus, the cosy bedrooms allow guests to be well-rested for the next day, ensuring every trip is a memorable one.

Where to Stay in the Financial District

There are a number of notable neighbourhoods close to and within the Financial District that each have their own unique benefits. Wherever guests choose to stay though, they will always be within easy walking distance of a tube station of transport hub. Apartments in Castle Baynard near Blackfriars can benefit from riverside views, as well as close proximity to Shakespeare’s Globe and St. Paul’s Cathedral. Residents of Barbican likewise will enjoy easy access to the Barbican Centre, one of the largest and most popular performing arts venues in London. Though London is generally a safe capital city to visit, guests are still advised to keep an eye on their possessions, as pickpockets may operate in even the quietest areas.

Facts About the Financial District

Due to its position right in the heart of the city, the area surrounding the City of London naturally benefits from a rich and interesting history, overlapping with many of the stories about wider London. Here then are some of our favourite facts about the area to entice and excite new visitors:

Cost of Living in the Financial District

A prime location in the centre of London, property prices in and around the Financial District do tend to be quite high when compared to some of the more distant, suburban neighbourhoods. The monthly cost for a rental apartment can range from £800 to upwards of £2,500 monthly, making serviced accommodation an increasingly viable option for extended stays given the many benefits and perks that go hand-in-hand with longer tenancy periods from TheSqua.re.

Unfortunately, there are few savings to be found in day to day expenses. Weekly travel passes (for Zones 1-2) can run to upwards of £35, while the cost of dining out can range from £15 for a meal for one to £55 for a three-course dinner for two. The reasonably low price of local groceries does however mean that this expenditure can be offset by stay-at-home meals, and medical costs will also be next to nothing, thanks to the UK-wide National Health Service. Money can also be saved on local entertainment, including theatres and cinemas, with inexpensive ticket prices and membership options available.

Things to Do in the Financial District

From tourist hotspots to unique cultural attractions, there are plenty of sightseeing opportunities to be found in the area around London’s Financial District. Here are some of the top activities in the area to help guests make the most out of their precious leisure time:

Q. What are the most popular things to do near the Financial District?

Q. What are some free things to do near the Financial District?

Q. What are the most family-friendly things to do near the Financial District?

Places to Visit in the Financial District

Wondering how to spend that precious day off? The City of London and surrounding area are home to a great range of enjoyable and interesting places to visit, from historic buildings to popular tourist attractions. Here are a few of our favourites:

Places to Eat in the Financial District

Whenever quiet nights in of home cooking seem like more of a hassle, residents of the Financial District can easily get out and explore the many fine bars and restaurants in the local area. From familiar chains to artisan eateries, there is a huge host of catering options available to suit all tastes, and with so much choice available, it can sometimes be hard to narrow a selection down.

Here are a few of the top places to eat near the Financial District:

Street Food in the Financial District

Street food is also an option in the nearby area for those travellers who are always on-the-go, though many of them will require visitors to venture out of the City of London itself. Brick Lane and Boxpark Shoreditch are the most popular local takeaway street food options, but more adventurous residents can also take in some of the other regular pop-up markets around Central London, such as Maltby Street Market, Model Market, Street Food Union, The Street Pig, Vauxhall Street Food Garden, and the Southbank Centre Food Market. A great dining experience no matter the season.

Shopping in the Financial District

As busy as some of its nearby counterparts, such as Covent Garden and Oxford Street, the City of London and Financial District is still less well known as a shopping destination in Central London. There are still however a host of high street chain stores and independent boutiques in which visitors can find all the food, fashion and technology they require.

Some of the best places to shop near the Financial District include:

Transportation in the Financial District

With 11 Underground lines covering 270 stations, London’s public Tube network is thorough and all-encompassing, meaning that visitors will never be too far away from the comforts of their serviced apartment. Travellers staying in the Financial District will be able to traverse the many boroughs of the capital with ease, and several major overground terminals, such as Liverpool Street Station, King’s Cross and Waterloo, open up further options for national and international travel. Tube stations in the area include Bank (Central Line, Northern Line, Waterloo & City Line), Monument (District, Circle), Moorgate (Northern, Circle, Metropolitan, Hammersmith & City) and Liverpool Street (Central, Circle, Metropolitan, Hammersmith & City, National Rail). Though the cost of fares is quite low, they can still mount up; fortunately, Day Travelcards can be bought (accepted through Zones 1-5) for £18.10, guaranteeing savings on every commute.

London is of course famous for its iconic black taxis and red buses, and these can both be a great way of sightseeing during travel. Buses in particular are exceptionally useful: they can be boarded with a simple tap of a Contactless Payment Card, Travelcard or Oyster (£1.50 for a single fare, £4.50 for a day of bus-only travel), and run over 700 routes, including 52 night services. Black cabs are also useful for the local knowledge of most of the drivers, however fares can be rather more expensive than buses, so we recommend using them sparingly.

Weather in the Financial District

Due to a generally temperate climate throughout much of the UK, the weather in London can be quite unpredictable, with temperatures ranging from below freezing during winter, to dry and balmy heights of thirty and above in the summer. Wet weather gear is however essential packing for any time of year, as downpours can still be just a cloud away. We would recommend visiting in September, as this month offers warm days and comfortable cool evenings, enabling travellers to maximise their time outside and make the most out of their stay.