Located in west London, Fulham is an ideal location for those looking for great transport in the city. With stylish interiors, ample space, a fully equipped kitchen and a comfortable bedroom, serviced apartments are ideal for extended stays and are a perfect alternative to hotels. When asked about Fulham, most Londoners would consider it one of the wealthiest areas of London. As one of the most expensive postcodes in which to own property in the capital, one would generally expect a need to be fairly prosperous in order to live there permanently.

It also enjoys neighbourly relations with some of the other ‘posher’ areas of London. Places like Knightsbridge, Sloane Square, Putney and Chelsea have all been long associated with the rich, and in recent times the mega-rich.

The desirability of Fulham is pretty obvious when time is taken to walk along it’s clean and well-maintained streets alongside the River Thames. The houses are generally well looked after and if there’s anything nicer than the houses, it’s the cars that sit outside them!

Fulham’s current lofty position at the top of the capital wealth chart is at direct odds with its history. In the 1700s the place was still filled with the rich, but they were only there to spend money on drinking, gambling and even prostitution. They would definitely not spend the night there let alone buy property in the area!

Nowadays it’s one off the most sought after areas of London, here are a few serviced apartments in Fulham from TheSqua.re, from which the area can be fully appreciated.

These are accommodation options which guarantee home comforts. Air conditioning, Wi-Fi and flat screen TVs come as standard, as do things such as a fully equipped kitchens and a living area.

All properties approved by TheSqua.re go through a strict check-list of amenities which must come as standard. Contact the reservations team for a breakdown of what each individual property has to offer. 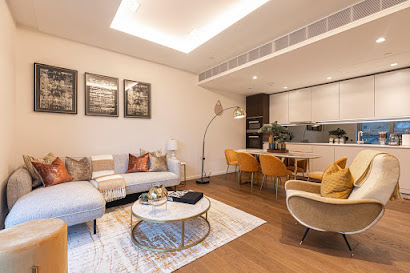 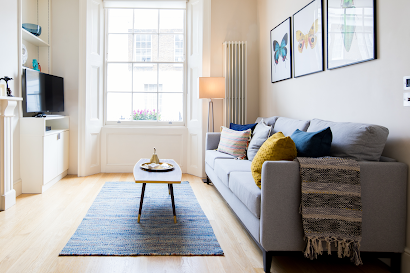 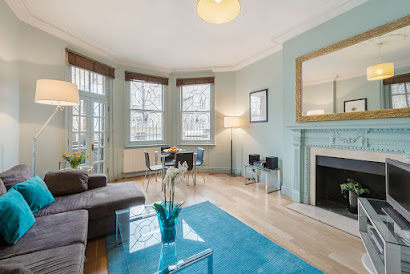 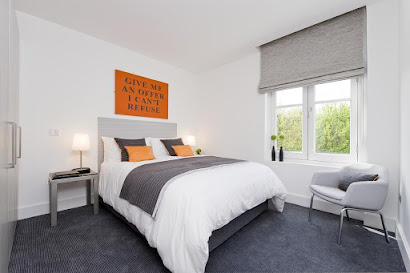 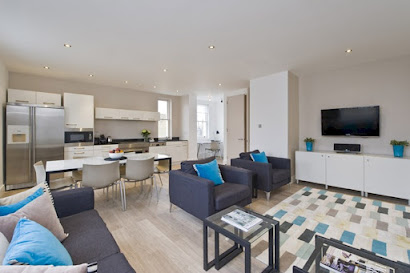 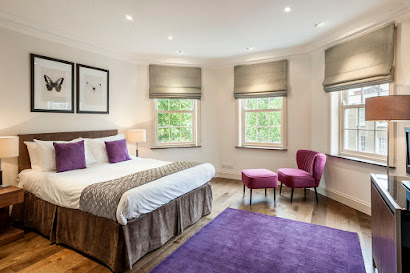 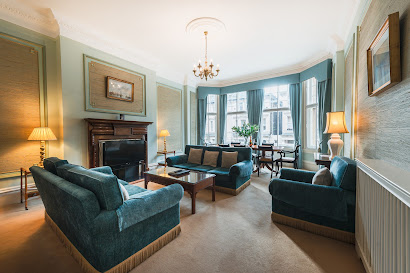 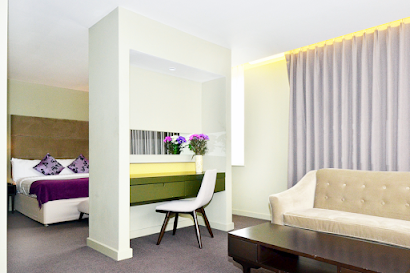 Explore
Uxbridge
Harrow
City of London
Central London
You may also be interested in
View More
More about Fulham, London

Staying in a Fulham postcode has a certain kudos about it which would appeal to most corporate travellers. It is also desirable as it has a much more residential feel to some of the business districts of London. Serviced apartments in Fulham provide a means of escape from the rat race without significantly increasing commuting time.

In fact, Fulham Broadway to Cannon Street takes around 25 minutes and all of the apartments available from TheSqua.re are conveniently located in terms of public transport links.

The other reason that serviced apartments in Fulham are becoming increasingly popular for the regular business traveller is the facilities they offer. Not least the sense of privacy which is conducive to both working and relaxing.

The standard mon-cons are also enticing. High speed broadband, home entertainment systems and a fully equipped kitchens are all things people would expect to find in most homes, yet traditional hotel rooms are often lacking.

The myriad of infamous sights and landmarks coupled with its rich history attracts millions of people to London every year. It’s one of the world’s most popular holiday destinations and the amount of tourists flocking there year on year dwarfs the number of business travellers.

Serviced apartments in Fulham are fast becoming the most popular base for holidaymakers to plan and execute their London adventures.

The apartments on offer from TheSqua.re have been selected due to their location, their decoration (all are tastefully decorated in a modern style) and a full checklist of all the latest mod-cons.

The kitchen facilities are a particular attraction to holidaymakers who are looking to save money on their travels. Eating out every night, especially in London, can prove incredibly expensive, not to mention expansive on the waistline. Having the opportunity to prepare a meal at home on occasion, in a fully stocked kitchen, is something that most people would find a bonus.

Staying within the city and being within such close proximity to all the major sights is the cherry on the cake. Fulham itself is particularly well placed for London’s museum quarter in Kensington.

Where to Stay in Fulham

Fulham is located towards the south west of the capital in the London Borough of Hammersmith and Fulham. It may seem like a quieter suburb of Greater London but is in fact just four miles from Charing Cross, which for many years has been considered the notional centre of London.

Any properties within close proximity of Fulham Broadway station are popular but Putney Bridge and Parsons Green also serve the wider Fulham area. All of these are on the District Line of the London Underground network.

Hammersmith and Chelsea provide alternatives to staying in Fulham and are very close by.

Aside from the obvious wealth and glamour, and also aside from the two famous football teams that are based in Fulham, non residents will struggle to pass on any other knowledge of the area. Fulham has however got a number of fascinating facts about it, including some of the UK’s firsts.

Cost of Living in Fulham

As one might imagine, the overall cost of living in Fulham can be summed up in one word, expensive!

However, a high cost of living is to be expected in an area as desirable as Fulham. There are a number of factors which make it so attractive.

Fulham is home to some of the most sought after schools in London, which attracts affluent families and young couples to the area who are planning on starting a family.

There’s also a French Lycée in Fulham which attracts well off Europeans to the area too.

For people that don’t like modern, new build houses and apartments Fulham is an attractive prospect too. Victorian and Edwardian housing is the norm and are suited perfectly to the well maintained, tree lined streets that Fulham has in abundance.

Serviced apartments in Fulham from TheSqua.re present a value for money option when looking for somewhere to stay in Fulham for the medium or long term. Average values for traditional rental properties are around £3,350 per month but can be as high as £25k per month for the most sought after properties.

Traditional rentals also come with the hassle of minimum term contracts, deposits and mountains of paperwork. A serviced apartment from TheSqua.re is as easy as renting a hotel room.

Staying in Fulham is perfect for a number of reasons. It is a quiet, tree-lined part of London that is deceptively central and a perfect spot for heading back to after a long day of work or sightseeing.

Staying further outside of London will achieve the serenity but travelling into London from the outskirts can be expensive in itself, and staying too far away is a possibility as newcomers can get overwhelmed by the sheer size of the Greater London area.

Fulham may not be famed for its local business districts or tourism sights but it is so close to all the places in London where most people would possibly want to be.

Here’s a few tips for making the most out of a stay in Fulham:

Things to Do in Fulham

Being so close to all the action, Fulham is well placed for people to enjoy the capital’s endless list of attractions. It is also well connected to railway stations which can transport visitors to attractions further afield.

Q. What are the most popular landmarks in Fulham?

Fulham has plenty of physical things to see in and around the area. Here’s some of the more prominent.

Q. What are some free things to do in Fulham?

London can be expensive, Fulham even more so! Cheap and free things are essential for some days of a stay, especially for those travelling with families.

Q. Are there many excursions to be had from Fulham?

Fulham is ideally located for all of London and the outskirts. Any excursions into the capital or even further afield, especially to the South, are not only possible but incredibly easy.

Serviced apartments in Fulham from TheSqua.re are always ideally located near to transport hubs which makes getting out for day trips even easier.

Exploring the city of Oxford is a popular excursion to be had from Fulham and making one’s own way there is incredibly simple, if a coach tour doesn’t appeal.

Q. What are the most family-friendly things to do in Fulham?

The museums have to be the favourite. The Natural History Museum is popular amongst the many kids who have a love for dinosaurs.

The Science Museum is unique as a museum as it actually encourages touch and interaction and the V&A Childhood Museum is a treat for children and adults.

For football mad children a trip to Stamford Bridge to watch Chelsea play a Premier League game would be a popular option. There’s also a behind the scenes stadium tour available for more hardcore fans.

For football aficionados, Fulham might be the better bet. Its idyllic Craven Cottage stadium is located right on the banks of the River Thames and is a must visit for any football fan at least once in their life.

Places to Eat in Fulham

Fulham may have the reputation of being fairly well-to-do but that isn’t necessarily reflected in all its restaurants and eateries. There are, of course, some very high quality places to eat and to entertain at on special occasions. But there are also plenty of every day places in which to enjoy a meal too. Here are a selection:

London is a world famous shopping destination. It’s difficult to stay anywhere in the capital which isn’t close by some kind of shopper’s paradise. Fulham does have its own shopping districts but also provides the means to go further afield for that retail fix.

Fulham is still very well connected despite all of its tube stations being on the District Line.

The Underground stations of Fulham are found on the green District Line on the Wimbledon branch. The following three stations are in Fulham:

When it comes to the Overground, Charing Cross station is just 4 miles away. Fulham does have its own Overground station, Imperial Wharf, which links up Stratford, Clapham and Croydon, and even has a service running as far as Milton Keynes,

The main bus routes are the 14, 22, 211 and 414 which link Fulham with nearby Chelsea and Knightsbridge as well as other transport options.

The rumours are true, London is a very wet city with constant rainfall arriving at the most inopportune times. The best way to enjoy this city is to carry plenty of layers (temperatures drop even on the warmest of summer’s days) and carry an umbrella.

Remember London attractions are there to enjoy all year round. Londoners don’t let the weather spoil their fun and neither should visitors!