Best known for the airport, Heathrow is a hub that connects London to more than 80 international locations, making it simpler for British merchants to reach developing markets and for visitors, students, and venture capitalists to enter the country. The same aircraft that transport people from the Heathrow airport also transport exports around the globe. As a result, there is a huge demand for serviced apartments in this area. Hence, we bring you the best service apartments in Heathrow. Many serviced apartments that are present are ideal for business and leisure stays; for both long and short-term purposes.  With stylish interiors, all our serviced apartments in Heathrow are a perfect alternative to hotels due to their ample space, fully equipped kitchens, and comfortable living area. As one of the UK’s busiest transport hubs, it is unsurprising that Heathrow features an abundance of on-site and off-site accommodation, catering to everyone from frequent business travellers to holiday-goers awaiting an early morning flight. Of course, different visitors will have different criteria when it comes to suitable accommodation, but the consensus is that serviced apartments in Heathrow offer the ultimate balance of convenience, comfort, and privacy.

TheSqua.re’s range of Serviced Apartments Heathrow, near Heathrow airport, is specially selected according to the highest of standards. Each offers visitors an unparalleled level of comfort, in a tastefully furnished private space replete with modern conveniences. The properties have also been specifically selected due to their highly desirable locations - ensuring that guests are never far from key landmarks and public transport hubs.

Some of the best serviced apartments in Heathrow include:

Offering additional amenities, including full kitchen facilities, private access, room cleaning, and concierge where available, these serviced apartments and apart-hotels in Heathrow offer the most comfortable and practical solution for anyone looking to stay in Heathrow. 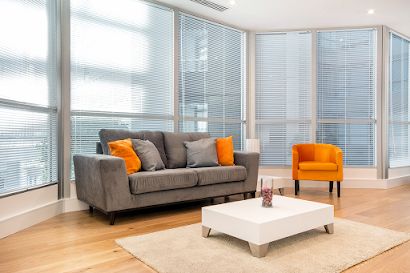 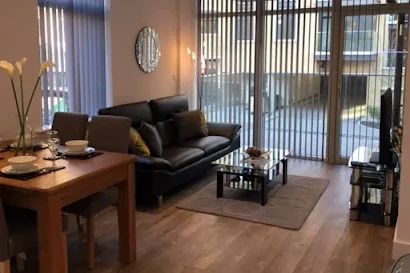 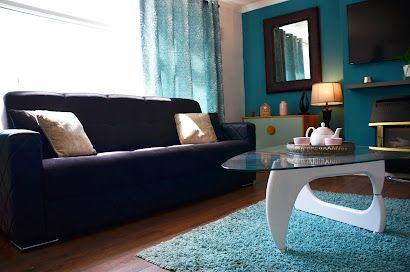 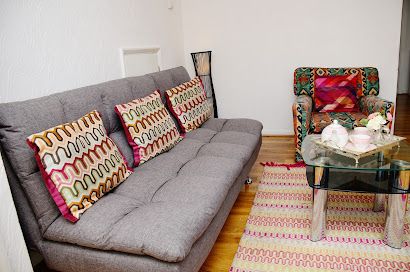 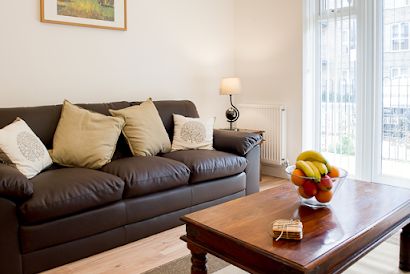 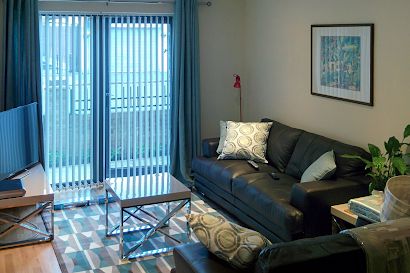 Where to Stay in Heathrow

Post pandemic tourists from all across the globe are in the mood to explore different parts of the world. People wanting to explore the neighbouring towns of London must opt to stay at serviced apartments for the best experience. Therefore, tourists looking for Serviced Apartments Heathrow can find it in some of the best localities like HounslowCentral Station, Isleworth, Ashford Train Station, Station Crescent, and Brentford County Bus & Coach Station.

Heathrow or Heath Row started out as a tiny airfield near a small hamlet in the parish of Harmondsworth, Middlesex. As the site grew, nearby buildings were knocked down and in 1944 the construction of London Heathrow Airport began. The airport now serves as the UK’s main international transport hub, with the most popular flights being New York, Dubai, and Hong Kong. It is also the main base for the UK’s carrier - British Airways.

Some facts about Heathrow Airport:

With an average of over 1,300 flights per day and employing some 76,500 people, Heathrow is one of the world’s busiest airports and an important part of the UK economy. There is also much speculation over the potential to expand the airport even further - with the addition of a third runway.

Things to Do in Heathrow

Given the airport’s size and traffic levels, it may come as little surprise that there are plenty of amenities onsite to keep travellers entertained. The airport is open 24 hours and there are several places to relax, grab a bite to eat, or catch up on some work with the free Wi-Fi. However, it is worth noting that facilities will vary at each terminal, and naturally, the first-class ticket holders will have access to enhanced facilities. Of course, there is always the option of venturing outside of the airport complex and enjoying what the surrounding areas have to offer.

Is there anything to do at the airport itself?

Heathrow offers plenty of shops and places to eat, which can help to pass the time whilst waiting for a flight or onward travel. There are also several entertainment zones, offering arcade machines and various casino games - however, these are not available in every terminal. Some tickets will also include lounge access, where movies and entertainment are depending on the provider.

What are the interesting things to do nearby?

Heathrow benefits from superb transport links into London, so those staying nearby have all the attractions of the capital within easy reach. Alternatively, there are also plenty of great parks and nature trails in the vicinity of the airport itself, as well as historic towns that offer plenty of amenities.

How easy is it to reach the attractions of London from Heathrow?

Heathrow has several direct rail links to London, as well as coach services that are fast and reliable. Depending on the mode of transport, the centre of London is as little as twenty minutes away. Routes are available to most London terminals, meaning those planning an excursion will find themselves amongst the city’s famous landmarks as soon as they step off the train.

Are there any things to do outdoors near the airport?

Heathrow has a surprising amount of outdoor activities either nearby or within easy reach thanks to its transport links. Two of the UK’s best theme parks are located nearby and there are also plenty of gardens and heritage estates that are open to the public.

Are there any active things to do near Heathrow?

Those who enjoy more active pursuits will find plenty of picturesque yet challenging walking routes in the surrounding countryside. Alternatively, there are also plenty of health and fitness facilities nearby - including several leisure centres and yoga studios.

Places to Visit in Heathrow

Heathrow airport itself has plenty of amenities to keep travellers entertained as they await an outgoing or connecting flight. However, those that find they are on a layover of more than a few hours will find that there are several other options available to them. The list below includes sights and attractions that can be visited from the airport for day trips or excursions of a few hours or more.

Places to Eat in Heathrow

If there is one thing Heathrow is not short of, it is its places to eat. Of course, the airport itself has an abundance of places to eat - ranging from simple bar snacks to familiar high street chain restaurants, such as Carluccios, Wagamama, and Yo! Sushi. However, being more or less surrounded by hotels, there are also plenty of opportunities to dine out in the vicinity of the airport. Some of the more popular hotel restaurants include Kaniz restaurant, which serves a range of contemporary Indian cuisine, The Pheasant Inn, which offers a typical gastro-pub style menu, and Fogg’s Kitchen and Bar, a contemporary restaurant serving a mix of traditional British and European dishes.

Heathrow is a great place to do a little shopping. Of course, the airport features an extensive Duty-Free shop for those travelling overseas, which offers everything from luxury brands to high-end liquours and cigars. However, there are also plenty of other retail opportunities within the airport’s terminals. The shops within each terminal will differ, with T2/3 and T5 having the largest retail selections. The airport shops are particularly notable for designer goods, with brand boutiques including:

Alternatively, those who are able to leave the vicinity of the airport will find nearby Staines offers the Elmsleigh shopping centre, with around 60 retailers across 2 floors, or there’s the Royal Shopping Centre in Slough.

There are several ways to access Heathrow Airport - including train, bus car and coach.

Those who plan to drive themselves will need to arrange parking - which can be booked in advance or paid for when departing the airport. By road, all terminals are reachable from the M25. Alternatively, National Express coaches run shuttle routes from several UK locations - including London Victoria coach station. Services generally start early in the morning and run until after midnight. Bus services link Heathrow with the national rail network at Feltham, Reading, Woking and Watford Junction and there are also several dedicated train services running directly to the airport - The Heathrow Express being just a 15 minutes journey from London Paddington.

Once inside the airport, there is a shuttle service between the terminals and those who have issues with mobility will find there is also a service offering electric transport between the airport gates.

Heathrow Airport receives snowy winters which become a major cause of flight delays. The roads and runways when covered with snow or precipitation make controlling the flight difficult. Therefore, the clearing of ice and snow is time-consuming and is the airport’s responsibility.

Cost to Stay in Serviced Apartments in Heathrow

Heathrow is a neighbourhood of London that mainly consists of the biggest airport in Britain, London Heathrow Airport. This area is situated near Surrey, West London. The area is close to the river Thames and one of the biggest public amenities offered by Heathrow is its communication. Heathrow Airport is connected with every corner of the planet and that’s why many people, especially tourists who want to live close to the airport usually choose this area. Surrounding neighborhoods include Hounslow, Southall, and Harlington and so on.  The cost to stay in Serviced Apartments in Heathrow is moderate to high. Some of the biggest and most highly-rated properties surrounding Heathrow are- Yellow Iris, Royal Blue, Green River, Gloss & Green, Pomp & Pizzazz Autumn Aura, Rosemary & Blush, Palms & Peacocks, Rose Garden Rest, Light Ombre and so on.  The cost to Stay in Serviced Apartments in Heathrow ranges from £110 per night to £216 per night. Yellow Iris offers the cheapest deal at £110 per night and Rosemary & Blush offers premium services starting from £216 per night.