The very word Hoxton has become synonymous with London’s iconic hipster scene. The namesake area has undergone a renaissance in recent years that has seen it emerge as one of London’s most fashionable places to be. However, thanks to its central location and proximity to both the City of London and Canary Wharf, Hoxton is also a favourite location for corporate travellers coming to London for work. This means that accommodation in Hoxton is in high demand and there are plenty of hotels, hostels and guesthouses. However, an increasing number of people are discovering the advantages of staying in private accommodation - enjoying many of the same benefits usually found in luxury hotels but all within an exclusive self-contained environment.

Some of the best serviced apartments near Hoxton include:

Serviced apartments in Hoxton provide everything guests need for a relaxing stay. Each property presents a luxurious, tastefully furnished living environment, with a range of mod-cons, including high-speed WiFi and home entertainment. Each self-contained apartment also offers guests the opportunity to self-cater in a fully equipped kitchen, making them particularly convenient for those planning a longer stay in Hoxton.

Contact our reservations team to find out more, or click here to book your serviced apartment in Hoxton. 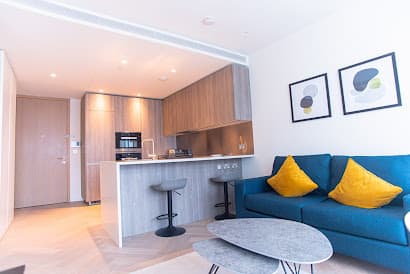 Whilst Hoxton is usually considered one of the city’s top social haunts, it is also ideally situated for business travellers who need easy access to the financial institutions in the City of London, as well as being less than 30 minutes from Canary Wharf. When it comes to corporate accommodation in Hoxton, serviced apartments provide everything guests need for a productive stay. Each property offers a private space in which guests can both work and relax, along with essential mod-cons such as high-speed Wi-Fi and a flatscreen TV. In addition, as each property is located within easy reach of local public transport hubs and comes equipped with full kitchen facilities, they offer a level of convenience for busy corporate travellers that few hotels can match.

Hoxton’s electric social scene, indie bars and pop-up galleries have made it a popular alternative to central London for holidaymakers. What’s more, tourists visiting the area are keen to get the most authentic experience of the area possible. Whilst holiday accommodation in Hoxton comes in a variety of formats, the best way to get the real hipster experience is by checking in to a serviced apartment. These properties offer a genuine home-from-home environment in which guests can enjoy a stress-free stay in complete privacy. However, they also provide many of the same benefits usually associated with hotels, such as room servicing and reception. The inclusion of full kitchen facilities also means that serviced apartments provide a much more convenient and personal experience than can be found at the average chain hotel.

Where to Stay in Hoxton

Hoxton is a small neighbourhood and anyone staying within its boundaries will find they are never far from the famous social hangouts, shops and galleries. In general, the junction between Bevenden Street, East Road and Nile Street is considered the ‘centre’ of Hoxton and accommodation in this area is amongst the most sought after. Alternatively, those who may wish to explore Hoxton, as well as neighbouring Hackney, may prefer somewhere in between, such as the more residential area around Haberdasher Street and Pitfield Street.

Hoxton has become notorious in recent years for its cultural and social movements. However, the neighbourhood’s reputation as a centre for the avant-garde is actually nothing new and over the years it has been at the forefront of numerous fashions and trends. What follows are just a few interesting facts about Hoxton:

Cost of Living in Hoxton

Make no mistake, Hoxton is one of London’s most exclusive locations. Accommodation is in high demand and often comes at a premium. For those planning a stay in the area, accommodation will almost definitely be the most significant expenditure. Hoxton rents can be anywhere from £1500-£3,000 per month, depending on the size of the property. The good news is that serviced apartments often work out cheaper - especially over the long term - as they include additional amenities and offer better cost-efficiency than the private rental market.

Travel is another potentially significant cost to consider. Fortunately, this is reasonably easy to budget for. Most people, whether they are tourists or business travellers, will be able to take advantage of the savings offered by a prepaid travel card. A weekly Zone 1 - 2 travel card for use on buses, trains and the tube will cost around £36 and offers considerable savings compared to buying individual tickets. Alternatively, those only spending a few days in London can use the Oyster for public transport, which has a daily cap of just £7.20 - after which all other journeys that day are free.

With regards to spending an evening out and enjoying Hoxton’s notorious social scene, it’s worth bearing in mind that drinks can also be pricier in the city centre. For example, the price of a pint of the latest craft-brewed ale can be anywhere between £6 and £8 - compared to £5 - 6 for a regular pint of beer elsewhere in the city. The price of a meal for two will vary depending on the establishment, but local places typically charge between £60 and £100 for a meal for two with wine.

Hoxton is ideally situated for travellers to explore London’s iconic landmarks as well as presenting a great opportunity to explore the capital’s diversity beyond the city centre. However, with so much to see and do, things can seem a little overwhelming for first-time visitors. With this in mind, what follows are a few tips for visiting Hoxton to ensure travellers get the most out of their time there.

Things to Do in Hoxton

Hoxton is known for its diverse social scene and this is reflected in the many activities and events on offer throughout the neighbourhood. Of course, it is also just a matter of minutes from London city-centre, meaning all the famous attractions of the capital are within easy reach. As such, travellers will not be found wanting when it comes to things to do in Hoxton.

Q. What are the most popular things to do in Hoxton?

Some of the most popular things to do in Hoxton and the surrounding area are:

Q.What are some free things to do in Hoxton?

Many of London’s top attractions are completely free of charge and just a short walk or bus ride from Hoxton, including:

Q. What are the most family-friendly things to do in Hoxton?

Whilst Hoxton has a reputation for its bars and galleries, it is also a great place to visit for families. Not only are there plenty of parks and towpaths that take walkers past some excellent historical sights, but there are also several educational institutions nearby - including some of London’s world-class museums. What’s more, the central area of Hoxton also has plenty of family-friendly restaurants and leisure facilities.

Q. What are the more unusual things to do in Hoxton?

Hoxton is ideal for those seeking an alternative experience of England’s capital. The area has plenty of quirky attractions, such as living museums and galleries as well as eccentric cafes and eateries. The local markets are also a fantastic way to see some of the unique arts and crafts of the area - as well as a few unusual personalities!

Places to Visit in Hoxton

Hoxton’s location just north of central London means there is certainly no shortage of places to visit and things to do. Aside from enjoying the area’s unique cultural scene and plethora of bars and nightspots, those staying in Hoxton can also make the short trip to explore some of the capital’s most famous attractions and landmarks.

Places to Eat in Hoxton

Above all else, Hoxton is defined by its huge range of unique cafes and restaurants. From new takes on classic pub food to vegan fusion street food, every kind of flavour imaginable in Hoxton’s diverse range of eateries.

Some of the best places to eat in Hoxton include:

As London’s premier hipster enclave, Hoxton inevitably offers a huge variety of street food and international cuisines. In fact, many Londoners travel to the neighbourhood specifically to enjoy their favourite takeaway snacks. Some popular vendors include:

Hoxton offers shoppers an eclectic retail experience, with two main shopping locations in the vicinity. The neighbourhood's main thoroughfare, Hoxton Street, is where to find the famous craft shops and independent boutiques that the area is known for, whilst Charles Square, which is south towards Hackney, also offers a diverse range of specialist stores.

Alternatively, those looking for more familiar brands can head to one of the many large-scale shopping centres that are to be found nearby, such as:

There are plenty of options when it comes to getting around in Hoxton. Whilst the neighbourhood itself is entirely walkable, those planning to make longer journeys may prefer public transport. Buses are popular in the area as several routes operate directly through Hoxton Street, connecting the area to London city centre and other suburbs. Hoxton also has an overground station, which offers regular trains into Clapham Junction, as well as out towards Crystal Palace and New Cross.

The tube is less popular for journeys directly in and out of Hoxton, due to there not being a station in the neighbourhood itself. However, there are several stops that are easily accessible from Hoxton. These include:

All public transport in London can be paid for either with the Travelcard or Oyster contactless system. Prices will vary depending on the distance and time of day of a given journey, but each card typically offers much better pricing when compared to the cost of an individual ticket.

London weather is famously unpredictable, though it can be broadly divided into the usual four seasons seen across the west of western Europe. Also, whilst rain can appear more or less any time of year, the good news is that London rarely experiences extremes of weather. Arguably the most popular time to visit is during the summer months when temperatures usually hover in the high twenties - occasionally climbing a little higher in August. However, winter is also a great time to see London as many parts of the city come alive with seasonal activities and events. Temperatures often drop close to freezing in the coldest months of December and January, but fortunately, there are plenty of places to warm up across the city! Of course, any other time of year travellers will find plenty to see and do in London, as it really is a city for all seasons.