Located in North London, Islington is a fantastic place to stay for both long and short stays. An alternative to hotels, serviced apartments provide you ample space, stylish interiors, comfortable living area, and a fully equipped kitchen. Islington in North London is generally considered to be one of the more desirable areas of the City in which to live in. The housing options are pretty eclectic but they are nicely varied in both style and price.

Islington is a great location for retail as well as dining and nightlife. It’s a very cosmopolitan area, so fashions and dining options are wide and always interesting.

Islington is also one of the many areas of London that has a thriving art scene. There are plenty of independent galleries and theatres in which all aspects of the art world can be enjoyed, from static to performance works. There are a number of companies based in Islington, most notably in the tech industry. But if work isn’t available locally then the commuting routes are fantastic.

Some of the top serviced apartments around Islington include:

The one thing that all of these properties guarantee is a home from home. Each of the serviced apartments Islington go through a strict checklist, compiled by TheSqua.re to ensure that they have the facilities to be expected by business and leisure travellers who are staying short or long term.

The provision of these essential amenities doesn’t take anything away from the uniqueness of each and every serviced apartment in Islington. 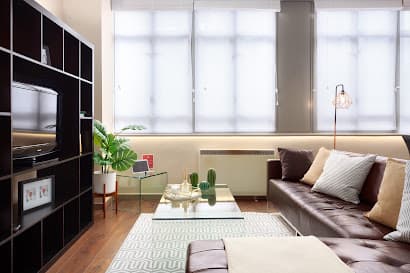 Hotels and other traditional accommodation options aren’t always up to date with the changing demands of the modern business and leisure traveller.

First of all, there’s the privacy. Apartments feel more homely and the sense of privacy achieved when staying in them is difficult to replicate in a large hotel that’s catering for the masses.

The size of the apartments are also difficult to replicate in hotels. Whereas a hotel room usually consists of a bedroom and a bathroom, serviced apartments in Islington also offer a living area and kitchen facilities as standard.

That means that not only is there a separate place to relax in, but a fully equipped area in which to prepare meals is offered too.

The home entertainment systems found in these apartments rival that of hotels too. Even areas where hotels have traditionally boasted differentiation can also now be matched by serviced apartments. Services such as a manned reception and a concierge are increasingly being offered in serviced apartments.

The locations of the apartments are also ideal. Islington isn’t necessarily a place in London where the most upmarket hotels would have representation. But companies such as TheSqua.re can offer serviced apartments Islington exactly where people want to be, or within easy reach of a public transport station.

Islington is a favourite place for commuting into London. It has all of the facilities of a small town on the doorstep but has fantastic links into Central London as well.

There are nine tube stations serving Islington and the surrounding areas, covering three London Underground lines and three zones. There are also five Overground train stations and a large number of bus services. For people travelling to work in London there are so many options.

But it’s not only about the transport links. The apartments offered by TheSqua.re aren’t just ideally located, they are also stocked full of amenities to ensure that returning back to them at the end of a hard day’s work is a relief.

The stocked kitchen means that a corporate traveller doesn’t even have to venture out again even to eat!

People come to London to do business, that’s true, but there are many other people who visit the city to have a good time. Whether that be on a relaxing short break or a longer term vacation that requires a ‘break-neck’ itinerary taking in all the sights.

Islington has plenty going on itself but is just a stone’s throw away from the most popular London sights. It also benefits from an excellent range of public transport options.

Where to Stay in Islington

Islington is a residential district in the London Borough of Islington. It is generally considered to be North London but is actually very central, covering the northern ’N’ postcode as well as EC (East Central).

Islington is a place that has been expanded around the traditional High Street. Islington High Street is around half a kilometre long and runs from Islington Green in the north through to the City and Pentonville Road junction at its south end.

Originally, Islington was a village and the High Street was made up of nine inns surrounding a pond. One of these inns, ‘The Angel’, now gives its name to the area around the high street as well as the nearest tube station.

The Islington of today is a popular, gentrified, achingly cool area that people just love to say they are from. But it hasn’t always been like that. Lying as it did, outside of the original London Wall, it hasn’t always been the pleasant residential area it is today. It used to be quite a lawless place with plenty of ale houses, gambling dens, theatres, amusements and brothels. Shakespeare mentioned Turnbull Street in Henry IV as an infamous brothel street. Today, Turnmill Street (as it’s now called) is better known for its upmarket apartments and there’s not a brothel in sight!

Here are a few further facts about Islington:

Cost of Living in Islington

Islington is a cool, sought after place to live but it is also very down to earth. The prices of property are high and there are plenty of high end arty types as well as city workers who call the area home.

However, Islington does have a large student population and the fact that they can be seen frequenting the local bars does suggest that Islington has a very affordable side to it.

A visit to Upper Street shows that Islington really is the place to be seen with plenty of restaurants and bars to try. These places range from the painfully expensive to the very affordable, so everybody is catered for.

Amongst the food and entertainment venues there’s also the odd chic homeware shop to browse, some of which have items at prices that demonstrate the spending power of a small percentage of Islington’s residents.

The sought after properties include Georgian and Victorian terraced houses but there are some more downmarket 60s/70s tower blocks in the area.

Fortunately, the vast majority of housing are the more modern apartments, some of which are offered by TheSqua.re for rental.

Islington is a great base for anybody looking to make the most out of a trip to London.

It’s perfectly located for business travellers. It’s minutes from the City meaning the trip to work is much easier, but more importantly the trip back to the fully furnished apartments are short. Meaning they can be enjoyed for longer. It’s also great for leisure travellers too. It’s close by lots of the major attractions as well as offering a large number of entertainment options in the evening.

Here are a few tips to really make the most out of a stay in Islington.

Things to Do in Islington

Q. What are the most popular landmarks in Islington?

Q. What are some free things to do in Islington?

Q. Are there many excursions to be had from Islington?

Islington is so well connected to all of London that the list of excursions to be had from it is actually pretty endless.

There are, however, some excursions which anyone staying in Islington would be in the best place to take advantage of.

Q. What are the most family friendly things to do in Islington?

Some of the things mentioned above are very family friendly.

Gillespie Park Nature Reserve is an inner city sanctuary containing 244 species of plant and 94 species of bird. There’s bat walks in the evening, pond dipping during the day and all sorts of activities aimed directly at children.

A tour round Arsenal’s Emirates Stadium will certainly appeal to football fans. See all of the areas usually off limits on match days as well as some amazing memorabilia.

Places close to Islington include Angel with a lot of things to do as well as Canonbury, Hoxton, Holloway, King’s Cross, St Luke’s and Finsbury to name a few.

Places to Visit in Islington

There are some fantastic attractions in Islington, here’s a selection.

Places to Eat in Islington

As the area is a key favourite with young people, trendy hipsters and professionals, the mix is quite diverse. From typical British pubs to fancy spots and goofy, trendy additions like burger places, avocado havens and much more, it is clear that every food palette will be catered for. Given how busy Islington can be, and its popularity, it may be best for travellers to book their tables before they arrive (if possible) so they can avoid disappointment.

Here are a few good restaurants in Islington.

There’s plenty of choice when it comes to shopping in London. But Islington also has its own hidden treats and shops to keep all travellers on their toes, and to pride that extra hint of retail entertainment. Whether it’s a few clothing stores or a few little shopping malls with a bit of everything, there’s bound to be something for everyone in this area. Here are a few places that are in or fairly local to Islington and are well worth checking out for those who love to shop.

The transport system once within London is extensive and generally reliable. Islington is very well served, as is most of North London, and getting to and from the place is fairly straight forward. The tube has its usual rates, with a zone 1-2 ticket (Islington is in zone 2) costing around £40 on a weekly basis (this may change through time) keeping travellers connected to Central London with absolute ease.

Some of the Underground Stations in Islington include:

Other stations in Islington include:

There are also plenty of buses passing through, in and around the High Street so reaching central landmarks like Trafalgar Square London Bridge and other additions is also simple and straightforward.

London follows a similar pattern to the rest of the South East of England when it comes to the weather, but is usually a couple of degrees warmer. This is great in the winter but can be very uncomfortable in the stickiness of summer.

Winters are generally cold and summers are pleasantly warm, but can get uncomfortably hot, especially on London’s antiquated transport system which rarely has air conditioning. Layers are important. Go out wearing more than needed and it can always be taken off. Don’t get caught out by London’s cool evenings.

Especially don’t get caught out by London’s inevitable rain. Always carry an umbrella and waterproofs!