Stratford is a fashionable area in the London Borough of Newham that is known for its superb leisure and shopping facilities, as well as its vibrant social scene. The area benefitted from huge amounts of investment in the run-up to the 2012 Olympics and is today one of east London’s most sought after areas - particularly for those working in the City or Canary Wharf. Fortunately, this increased demand is met by a range of options when it comes to accommodation. In particular, thanks to the area’s extensive regeneration, there is now an abundance of modern serviced apartments in Stratford. These private lets are a particularly popular alternative to the usual hotels and guesthouses, as they offer a much higher degree of comfort and convenience - especially over longer stays.

Some of our top serviced apartments near Stratford include:

Each of these properties has been selected according to TheSqua.re’s exacting criteria, meaning they offer the highest standard of decor, the latest in modern conveniences and are to be found in the most desirable areas of Stratford. What’s more, each offers guests a fully equipped kitchen in which they can prepare their own meals, making them particularly suited for those making an extended stay in Stratford. 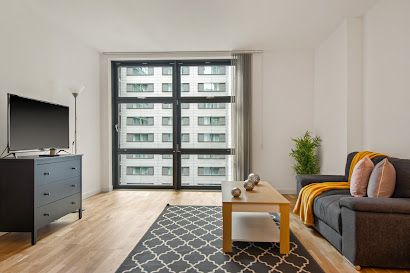 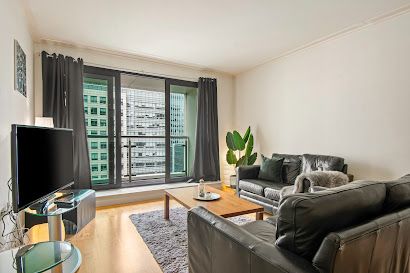 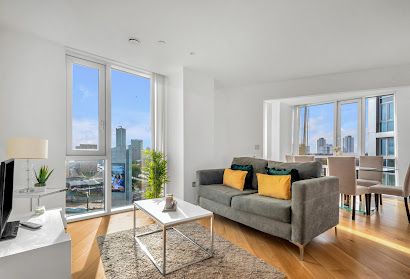 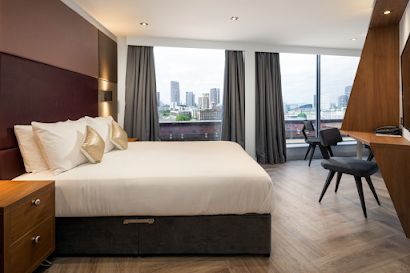 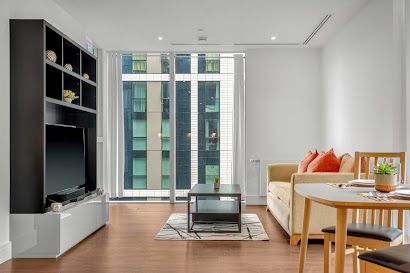 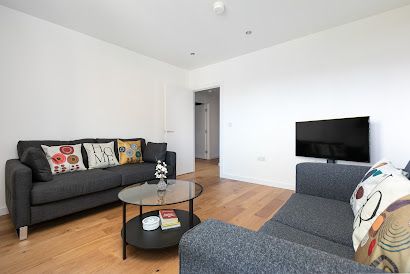 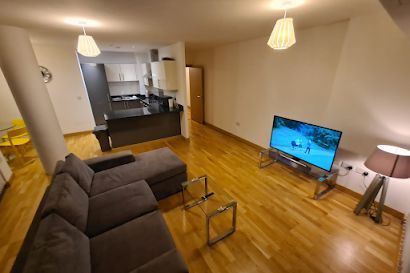 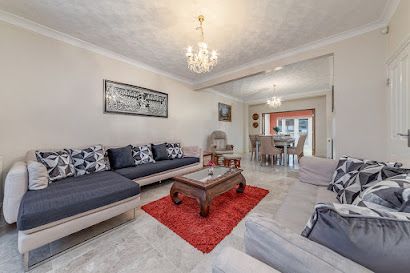 Serviced apartments are becoming increasingly popular, as more and more people realise the numerous advantages they offer compared to mainstream private accommodation. Staying in a private apartment means getting the best of both worlds - a private, home-like environment in which to relax, as well as the change to self-cater, along with additional services such as room cleaning, concierge and reception.

These properties are also usually found in the most desirable areas of a given district or neighbourhood - offering a host of local amenities, proximity to local sights and landmarks as well as easy access to public transport hubs. It’s also possible to find serviced apartments with additional facilities, such as on-site gyms, private parking, secure entry and disabled access.

Finally, booking into serviced apartments through an established provider like TheSqua.re means all the legal and regulatory particulars usually associated with the private rental are taken care of via a seamless booking system, leaving guests to relax and enjoy their stay known they are in the hands of a trusted and professional customer service team.

Stratford offers easy access to both Canary Wharf and the City of London, making it an extremely popular location for business travellers to base themselves when in London.

TheSqua.re’s corporate accommodation in Stratford caters specifically to a discerning business clientele. Each property is furnished with a desk/study space and comes with essential mod-cons including high-speed Wi-Fi and a flatscreen TV. Furthermore, each has been selected for its range of options when it comes to public transport - essential for those making a regular commute. Finally, for those who will be busy with work during their stay, the inclusion of kitchen facilities means guests don’t have to waste time looking for a cafe or restaurant at meal times - they can simply prepare on demand.

Stratford is also becoming a fashionable alternative for those visiting London as tourists. The area not only offers quick and easy transport links to all of the capital’s major landmarks. Serviced apartments make for ideal holiday accommodation in Stratford, offering guests a home-from-home environment in which to enjoy their stay. One of the biggest advantages of private apartments is that they come with a fully equipped kitchen, meaning guests have the option to self-cater - which can yield much greater cost-efficiency over longer stays. What’s more, staying in a self-contained, private apartment offers a much more personal and authentic holiday experience and enhanced services, such as room cleaning and reception mean the guests sacrifice nothing when it comes to convenience.

Where to Stay in Stratford

Whilst Stratford is a reasonably small district in east London, it nonetheless has several distinct areas. When choosing where to stay in Stratford, it’s important to consider the nature of any trip - those visiting on business, for example, will likely want to base themselves near the main commercial areas around Electra and Uplands business parks, whilst those staying in the district as tourists may want to be nearer the leisure facilities and attractions of the Olympic Park. Typically, Chobham Manor and East Village are the most sought after areas to stay in Stratford, offering a balance between local amenities and access to the main railway and tube station. Alternatively, those looking for more of small-town atmosphere can opt for accommodation in the Cathall neighbourhood.

Stratford was once known for its farmlands and was once one of London’s most fertile area for growing potatoes! However, since the industrial revolution, the small district became more and more integral to east London’s manufacturing industries. Of course, the area later became famous as one of the London 2012 Olympic sites, with its Queen Elizabeth Olympic Park since being repurposed as a sprawling leisure, shopping and entertainment complex. Below are a few other facts about Stratford:

Cost of Living in Stratford

Whilst London is somewhat notorious for its high cost of living, those staying in Stratford might be pleasantly surprised. Despite its location just outside of the city centre, prices in the district are generally a little lower than they are in the city centre - especially when it comes to the largest expenditure: rent.

Typically, the price of renting an apartment in Stratford will range from between £950 and £2,500, depending on size and location. The advantage of serviced apartments is that they become more cost-effective the longer the stay and also offer additional savings by providing services such as room cleaning and concierge. They also come complete with the latest in home entertainment and mod-cons, which can often be an additional spend when looking for short to medium term lets.

Other expenses to consider will be food and travel costs. The latter is fairly easy to budget for - a Travelcard for central London will cost around £13.10 for the day, or £35 for one week. Food will, of course, vary dramatically depending on lifestyle, but serviced apartments offer the facility of a fully equipped kitchen - which means having the option to self-cater. This can offer huge savings over the longer term.

Stratford has undergone something of a renaissance since 2012, having been transformed from an indistinct London suburb into one of the south east’s top leisure and entertainment hotspots. As a relatively ‘new’ travel destination, many visitors may feel at a loss when it comes to getting the most out of their stay in the area. With this in mind, what follows are a few tips for visiting Stratford:

Things to Do in Stratford

Stratford itself is known for having one of the best social, entertainment and shopping complexes in London. It is also less than 20 minutes by tube or 30 minutes by bus into the centre of the city - meaning anyone staying in Stratford will be presented with a huge amount of options when it comes to things to see and do.

Q. Is Stratford close to any tourist attractions or landmarks?

Stratford itself has plenty to see and do, but it also benefits from being within easy reach of several major landmarks. These include:

Stratford is a key location for London’s business and commerce - particularly the offices around the Olympic Park complex. However, the district is also just a short tube ride from the capital’s main business hubs: Canary Wharf and the City of London. This makes it ideal for business travellers. What’s more, it’s also the perfect base for those working in the city, as the Olympic Park offers numerous sporting and leisure facilities to make the most of any downtime.

Q. What are the best things to do in Stratford itself?

Thanks to its substantial regeneration, Stratford now boasts some of the best social hangouts and leisure facilities east of London city centre. A few local highlights include:

Q. Does Stratford have a good nightlife scene?

Stratford is known as one of London’s nightlife hotspots, thanks to its abundance of bars, restaurants and pubs. Particularly noteworthy is the selection of chic cocktail bars in and around the Westfield Centre and Stratford Broadway. There are also plenty of more traditional London pubs, especially in the more residential areas of Chobham Manor and Leyton.

Places to Visit in Stratford

Stratford’s biggest attractions are mostly within the Queen Elizabeth Olympic Park. This sprawling, 227-hectare complex offers everything from shopping centres to cutting-edge sporting facilities. However, the area also offers plenty of other attractions in its immediate vicinity as well as the neighbouring districts. Some highlights include:

Places to Eat in Stratford

Of course, no area could be considered a top social hub without an excellent selection of places to eat. Since the 2012 games, Stratford has also been identified as one of the capital’s most up-and-coming districts when it comes to dining out. A few of the top establishments in the area are:

Stratford isn’t all chic bars and fine dining, there is also a burgeoning street food scene in the district - particularly when it comes to international cuisine. Visitors will find most of the popular places are located in and around the Westfield Centre. Some top recommendations are:

Stratford is one of the top locations for shopping in the whole of the UK - the famous Westfield Stratford has a total retail area of almost 2 million square feet! Westfield boasts some 350 shops and services as well as leisure facilities. The centre itself is part of a large development called Stratford City, which also has several other shopping plazas and retail areas. Those looking to branch out from Stratford will also find several other top shopping locations nearby. These include:

Stratford benefits from being part of London’s expansive transport infrastructure, meaning anywhere in the capital is within easy reach via bus, train or tube. Stratford Station is served by both overground and underground trains, as well as the Docklands Light Railway. There are also numerous bus routes operating locally, both into the city centre and out towards the suburbs. There is also a night bus (N86) that connects Stratford to its surrounding districts when other services have stopped. However, most visitors to Stratford looking to travel in and around London find the tube to be the most efficient means. The district is served by the Central Line and offers direct connections to the following:

London weather has a reputation for being unpredictable, but in fact, it follows a fairly uniform seasonal pattern. Winters are often cold, with the temperature dropping below freezing on the coldest months of December and January. However, winter is still a popular time to visit Stratford due to the district’s myriad of indoor attractions. By contrast, London weather in July is usually warm and dry, with temperatures reaching average highs of 24 degrees, edging a little higher into August. Summer is generally the most popular time to visit London as it means being able to soak up the atmosphere and enjoy everything the capital has to offer - both indoors and out. London summers are known for having the odd shower, so it's a good idea to pack clothing appropriate for wet weather.