Located in the heart of London,  Tower Bridge is an ideal location for those looking to stay in the heart of the city. With charming interiors, lots of space, a fully equipped kitchen and a comfortable bedroom, serviced apartments are ideal for extended stays and are a perfect alternative to hotels. Whether in London for business or pleasure, serviced accommodation is one of the best ways of spending one’s nights. With an abundance of excellent locations in some of the most popular travel destinations in the world, all serviced apartments from TheSqua.re combine comfort and convenience to match the exacting standards of a true home away from home. Plush interiors and the inclusion of high-end amenities allow guests to make their own itinerary, and come and go as their schedule suits. Not only this, but TheSqua.re also meticulously selects every apartment based on a range of criteria, ensuring these private travel hubs are never too far from public transport hubs or local attractions.

Some of the best serviced apartments near Tower Bridge include:

Offering cleaning and concierge services, private access, full kitchen facilities, high-speed Wi-Fi and much, much more, these stylish, spacious apartments are growing increasingly popular among both short term and long term visitors to London. Whether coming or going, TheSqua.re guarantees restful and relaxing nights no matter the activities of the previous day, with dedicated customer service and a unique human touch to keep guests coming back time and time again. 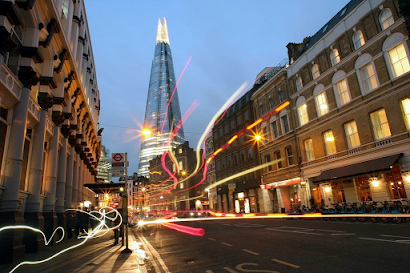 Serviced accommodation from TheSqua.re is a great way for temporary travellers and prospective residents to get a feel for a new city before making a permanent move. Lower rental costs and a range of additional perks and benefits make serviced apartments an ideal alternative to short term property lets or some of the busier city hotels. Even extending or renting is made easy, as TheSqua.re also handles all legal and contractual aspects, including deposits, bills and agency fees. Longer term residents are rewarded with exclusive benefits, such as gym memberships or discounted entry to local events, and the apartments also come move-in ready, with all furniture and fittings already in place. What’s not to like?

Located in the heart of London, Tower Bridge provides excellent transport links to the wider capital, making it the perfect destination for those looking to do business in one of the most international cities in the world. Well-served by TFL, journeys from Tower Bridge into the financial and commercial centres take just a few minutes, great for networking or expanding that start-up. Useful accommodation options for those with a busy schedule, all serviced apartments in Tower Bridge are designed with their guests in mind, and come fully furnished with high-speed Wi-Fi and flatscreen TVs to help travellers unwind after a busy day. Cosy up for the night in a personal palace and maximise productivity for the duration of that business trip.

Tower Bridge is also a convenient destination for those looking for a luxury leisure retreat, be it a full family holiday or a long weekend away. Many of London’s top sights and attractions are right on the doorstep of all serviced accommodation in this area, with the rest just a short commute away, ideal for groups or solo travellers looking to escape for a few nights. And the apartments’ fully equipped kitchens provide plenty of opportunities for home cooking whenever quiet nights in beat combing the many bars and restaurants in the area. Perfect!

Where to Stay in Tower Bridge

There are a number of notable neighbourhoods either side of the river that offer great accommodation within easy walking distance of the eponymous bridge. London Bridge and Borough are the main ‘high street’ areas, with apartments littered among a variety of name brand stores, pubs and restaurants. Both of these areas provide easy access to the Northern Line, with London Bridge also connected to the Jubilee and National Rail lines. Shad Thames and Bermondsey are somewhat quieter and more residential, with Shad Thames in particular comprising apartments and businesses built from converted dockside warehouses. Shoreditch and Wapping are located on the north side of the river, Shoreditch known for its exotic bars and nightlife, and Wapping the equivalent of Shad Thames to the east of St. Katharine Docks.

For tourists and temporary residents, London can be pretty safe, especially compared to other major capital cities, however travellers are still advised to be aware of pickpockets, particularly in some of the busier bars and clubs. Areas such as Rotherhithe and Wapping however tend to be quieter and less occupied during the nights, making them safer than some of the other areas around the bridge.

London was the centre of the English-speaking world for many years, and, some would argue, remains so to this day. As one of the most iconic landmarks in the city, Tower Bridge obviously has its own legacy and history to match. Here are some of our favourite facts about Tower Bridge and the area around it:

Cost of Living in Tower Bridge

Being in a relatively prime location in the centre of London, property prices around Tower Bridge tend to be quite high. Apartments can range from £700-£2,000+ per month to rent, making serviced accommodation an increasingly viable option for longer term travellers, particularly when taking into account the many benefits and additional perks that come from renting for an extended period of time.

Day to day activities meanwhile can vary substantially in price. Weekly travel passes (for Zones 1-2) can run to upwards of £35, though there are discounts available for eligible residents, which are always worth looking into. Dining out of an evening can range from £15 for a meal for one at an inexpensive restaurant, to £55 for a three-course meal for two at a mid-range restaurant. TheSqua.re’s fully-equipped kitchens and the reasonably low price of local groceries however means that eating in is always an option for those looking to save some pennies. And for entertainment options, London is full to the brim with theatres and cinemas, many of which can be reasonably cheap thanks to membership options and inexpensive ticket purchases.

Things to Do in Tower Bridge

From tourist hotspots to serendipitous discoveries, there is plenty for new and returning visitors to see and do near Tower Bridge. Here are some of the top activities in the area to help guests make the most out of their precious leisure time:

Q. What are the most popular things to do near Tower Bridge?

Q. What are some free things to do near Tower Bridge?

Here are some great ways of passing the time in Tower Bridge without breaking the bank:

Q. What are the most family-friendly things to do near Tower Bridge?

Places to Visit in Tower Bridge

Tower Bridge is an iconic landmark in a city which itself possess thousands of years of history. As such, the area around it plays host to several sites of special historic significance, and is frequented by millions of tourists every year. For any travellers looking to fill some hours in the spare time, there are plenty of great things to see and do locally. Here are a few of our favourites:

Places to Eat in Tower Bridge

Away from the fully furnished kitchens of TheSqua.re’s luxury serviced apartments, there are plenty of fine restaurants and eateries in the area around Tower Bridge catering to all tastes. From gastropubs to bistros, Italian to Indian, guests will find no shortage of choice, whatever is on the menu for that night.

Here are a few of the top places to eat near Tower Bridge:

Street food is also an option in Tower Bridge, with the likes of St. Katharine’s Marina, Boxpark Shoreditch, and Maltby Street and Borough Markets offering pop-up food huts to many a curious visitor. For a true street food dining experience however, there are plenty of regular markets to be found in Central London, including such favourites as Vauxhall Street Food Garden, Model Market, Street Food Union, and the Southbank Centre Food Market. Delicious!

Residents of Tower Bridge will easily be able to get out and explore the many wares London has to offer. From Oxford Street to Covent Garden and Westfields, all of the most popular shopping destinations in the city are just a short commute away, offering the best in gifts, groceries and fashion. There are however a number of excellent retail hotspots closer to home, including both high street chains and independent retailers, for those who prefer to keep things local.

Some of the best places to shop near Tower Bridge include:

London benefits from a world-renowned public transport system, comprising the Underground, riverboat services, black cabs, and the iconic red buses. Between them, residents are able to traverse the whole city with ease, and major overground terminals, such as Kings Cross, Victoria and Waterloo, open up more options for getting out and exploring the rest of the UK. Tower Bridge is served by three main Tube stations: Tower Hill (District and Circle Lines), Bermondsey (Jubilee Line) and London Bridge (Jubilee, Northern, National Rail). These stations are arguably the speediest and most efficient ways of travelling around the city, and Day Travelcards can be bought (accepted through Zones 1-5) for £18.10.

Red buses are a great way of sightseeing while commuting, and with 700 routes in operation across the city, including 52 night services, travellers can be sure their serviced apartment is just a short journey away. Nothing quite beats sitting on the top deck of a London bus watching the city go by. As an added bonus for those residents of Tower Bridge, TFL also offers riverboat services along the Thames, departing from Tower Millennium Pier. Though slower than many other modes of transportation, riverboat services are still a good way of getting a feel for the city, with six River Bus routes running from 22 piers between Putney and Woolwich.

The UK is known for its generally unpredictable weather, and London is no exception. Though overall quite temperate, the city can have rather cold winters, with temperatures dropping below freezing during the coldest months, and hot, balmy summers, with temperatures reaching above thirty in July and August. This does not mean however that there is no chance of rain, so wet-weather gear is essential packing at all times of year. September is an optimal month for visiting London, as day temperatures are still comfortably warm, and the evenings are crisp and cool, allowing visitors to maximise their time away and make the most out of their daily activities.