Located in the heart of London,  Tower Hill is an ideal location for those looking to stay in the heart of the city with great connections to some of London’s most iconic landmarks. With stylish interiors, lots of space, a fully equipped kitchen and a comfortable bedroom, serviced apartments are ideal for extended stays and are a perfect alternative to hotels. Packed with monuments and world-famous landmarks, London’s Tower Hill is one of the UK’s most popular destinations. The area is named after the notorious Tower of London and welcomes millions of visitors every year - all of whom of course need somewhere to stay. For this reason, the area is noted for its abundance of hotels, hostels and guesthouses. However, whilst these may offer perfectly adequate accommodation, more and more people are opting for the more luxurious and personal experience offered by serviced apartments in Tower Hill. These properties are available in a range of sizes and styles and provide guests with their own private space from which to explore the surrounding attractions.

Some of the best serviced apartments near Tower Hill include:

TheSqua.re’s serviced apartments have been specifically chosen for their high standard of decor, their range of mod-cons and the convenience of their location. Each offers guests the chance to enjoy Tower Hill in a home-from-home environment, including a fully equipped kitchen - making them particularly suitable for those who prefer to self-cater.

Contact our reservations team to find out more, or click here to book your serviced apartment in Tower Hill. 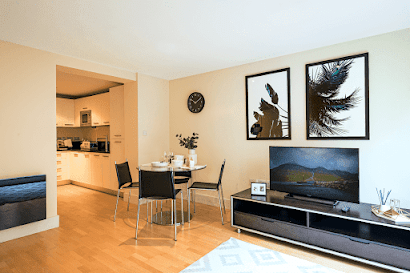 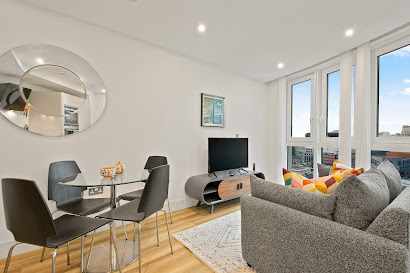 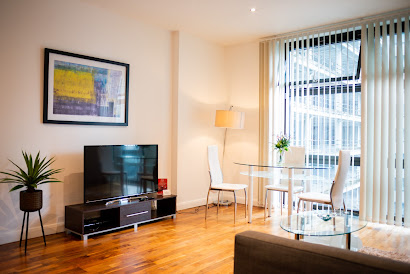 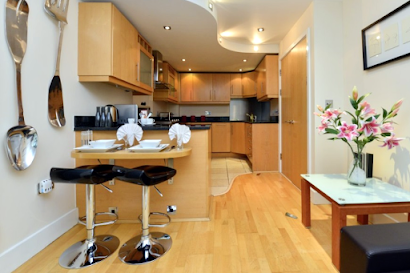 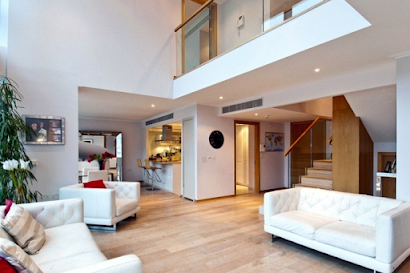 You may also be interested in
More about Tower-hill, London

Aside from its plethora of famous landmarks, London is also one of the world’s leading economic powers and Tower Hill is just a short distance from the City of London - the capital’s financial district. Naturally, this means that a huge amount of travellers come to the area on business, both on long and short term stays. Thankfully, corporate accommodation in Tower Hill is specifically set up to cater to the exacting needs of a discerning business clientele. Each apartment or studio offers all the facilities necessary for a working trip - flat-screen TV, high-speed broadband and recreational space. Furthermore, the properties offered by TheSqua.re are close to local transport links and amenities, ensuring maximum convenience. The provision of kitchen facilities also means guests needn't spend time looking around for a restaurant or cafe when it comes to mealtimes - which in itself is hugely beneficial to those with limited free time.

Being close to so many world-famous attractions, it will come of little surprise that Tower Hill is a popular place to stay for tourists visiting London. Thanks to the area’s central location, it is also the ideal base from which to explore the wider city, such as the sophisticated west end, the south bank and the hipster capitals of north London. Naturally, this means there is an abundance of holiday accommodation in Tower Hill - ranging from chain hotels to luxurious private apartments. The latter, in particular, has become increasingly popular in recent years, as travellers strive for a more authentic experience of England’s much-fabled capital. Serviced apartments offer a genuine home environment - a private living space replete with mod-cons such as high-speed wifi, home entertainment and air conditioning. Instead of having to pass through a crowded hotel lobby, guests simply use dedicated secure access to their own apartment. Each property also has the benefit of kitchen facilities, meaning guests have the option to dine in if they prefer.

Where to Stay in Tower Hill

Tower Hill encompasses a small area to the north of the eponymous landmark. In terms of where to stay in Tower Hill, any location will be easily walkable from the next and just as close to the public transport hubs. As such, choosing a location will mostly come down to personal taste. In general, many visitors prefer to be slightly away from the Tower itself, as it inevitably draws huge crowds throughout the day. With this in mind, popular locations include the intersection between Pepys Street and Cooper’s Row - which puts visitors close to all the local amenities as well as being equidistant between overground and underground railway stations - and the area immediately surrounding American Square, which is particularly notable for its vibrant nightlife.

Tower Hill is instantly recognisable due to its being home to one of London’s most iconic landmarks. Of course, the Tower of London has a long and often gruesome history, and being one of the oldest parts of the city, there are numerous fascinating facts associated with Tower Hill:

Cost of Living in Tower Hill

Tower Hill is an extremely popular part of London, so visitors will find that prices here can often be higher than places further from the centre. The cost of living in general will, of course, depend largely on lifestyle. However, when budgeting for a trip there are a few key expenses to consider. Rent will be the biggest expenditure, with the average price of an apartment in Tower Hill ranging from £1500 to approximately £4,000 per month, depending on the size of the property. This cost may seem high, but it’s worth remembering that Tower Hill really is premium city-centre real estate. Furthermore, visitors to the area may find they boost cost-efficiency by booking into serviced accommodation - which can often work out cheaper than the standard rental market, especially for longer-term stays.

Travel is another cost to consider, but thankfully is something that can easily be budgeted for: a weekly Zone 1 - 2 travel card for use on buses, trains and tube will offer unlimited transport and costs around £36. Finally, socialising and leisure activities will also add significantly to outgoing costs during a stay in Tower Hill. This can be harder to cost accurately, as spending will vary hugely according to lifestyle. However, as a general guide, a meal for two in the area is likely to cost between £40 and £200 depending on the restaurant. Meanwhile, the average pint of beer or a glass of wine served in a bar or pub will cost upwards of £6.

London can seem like an expensive city, but there are plenty of ways to save money. For example, a city pass offers discounted entry to many attractions and several restaurants offer two-for-one dining on certain days of the week. Researching such offers prior to travel can greatly reduce the everyday cost of living in Tower Hill.

Tower Hill is a busy area and the sheer amount of attractions and landmarks nearby can almost seem overwhelming. Similarly, whist London’s public transport is extremely user-friendly, it can seem complicated to the uninitiated. To help visitors get off to the best start for their trip to London, below are a few tips for visiting Tower Hill:

Things to Do in Tower Hill

There is certainly no shortage of things to do in Tower Hill - not only is the area home to one of London’s most famous landmarks, but it is also just a short walk away from several other iconic locations. As such, anyone staying locally will find they are somewhat spoilt for choice when it comes to potential activities.

Q. What are the most popular things to do in Tower Hill?

Tower Hill is the ideal location from which to learn about London’s incredible history and discover what makes England’s capitals one of the most visited cities in the world.

Q. What are some free things to do in Tower Hill?

The great thing about London is that many of its world-class attractions are completely free.

Q. What are the most family-friendly things to do in Tower Hill?

Tower Hill is the ideal destination for families as it is home to plenty of exciting landmarks and attractions that both children and adults will enjoy. The Tower itself features plenty of hands-on exhibits as well as the opportunity to learn more about London’s history. Similarly, Tower Bridge no only offers spectacular views but also details the architecture and mechanics involved in operating the iconic structure. The area around Tower Hill also has plenty of family-friendly restaurants and cafes.

Q. What are the more unusual things to do in Tower Hill?

Many travellers to London enjoy visiting landmarks from the darker aspects of the city’s history. These may include following in the footsteps of Jack the Ripper, wandering the site of the notorious Clink prison or enjoying a coffee in a genuine subterranean crypt.

Places to Visit in Tower Hill

Tower Hill is right in the heart of London and most of the city’s major attractions are within easy reach. From historic monuments to cultural hotspots, there are numerous places to visit in Tower Hill and its surrounding area. Whilst guests will find untold options when it comes to places to visits, a few top suggestions include:

Places to Eat in Tower Hill

London is famous for its superb restaurants, ranging from world-class fine dining to local favourites. When it comes to finding places to eat in Tower Hill, visitors will find they can choose from more or less any cuisine imaginable.

Some of the best places to eat inTower Hill include:

Aside from its upscale eateries and fashionable international cuisine, Tower Hill and its surrounding area also offers a great selection of street food, ranging from long-established riverfront vendors to pop-up takeaways.

Some top places for street food in Tower Hill include:

London is famous across the world for its shopping, boasting the numerous high-end shopping malls, historic markets and, of course, the city’s most famous shopping thoroughfare: Oxford Street. Whilst Tower Hill is more famous for its monuments than anything else, those staying locally will find they don’t have to travel far to enjoy some top shopping destinations.

Some of the top shopping locations within easy reach of Tower Hill include:

Tower Hill is, of course, part of London’s extensive public transport system, meaning visitors will have no trouble in reaching any part of the city as well as travelling to other parts of the UK. The main modes of transport for getting around the city centre are likely to be buses and the London Underground. Tower Hill tube station is served by the Circle and District lines, which offer quick access to several key locations including:

Underground prices vary depending on the time and distance of travel, however, a day Travelcard for zones 1 - 6 will cover the entire network and currently costs around £20. Travelcards and the Oyster payment system can also be used to pay for journeys by bus Tower Hill Gateway is the main bus stop, with four main routes offering access to all the major areas of the city. There is also a night bus - N551 - which operates from midnight until around 5 am.

Another option for transport is the famous London taxis - however, it should be noted that rush hour traffic can make these impractical and it is often faster to use public transport.

London weather is famously unpredictable, although its reputation as a foggy city is somewhat underserved in recent times. Typically, the city experiences the same fours seasons as anywhere else in western Europe, rarely seeing extreme weather conditions. The summer months of July and August are a popular time to visit. Temperatures usually hover pleasantly in the high twenties and rain is unlikely. September is also a popular time as many of the city’s famous landmarks are less crowded due to it being school term time.

Whilst the winter months of December and January can see temperatures drop to freezing, many visitors flock to London at this time of year for its many festive attractions, such as ice skating, street markets and the famous Winter Wonderland in Hyde Park. All in all, London is a city for all seasons and visitors can expect plenty to see and do - whatever the weather.