West Drayton is a town to the west of Greater London, situated within the London Borough of Hillingdon. It’s very much a former quiet English village turned commuterville town, with plenty of heritage charm and a village green at the centre.

This used to be very much an agricultural town. The old transportation links via the Grand Union Canal are still in place and will soon be joined by more up to date methods of transport, namely Crossrail. This line will connect West Drayton up more tightly with Central London and provide a route all the way through to Abbey Wood in the East.

The new transport system is also expected to attract new businesses to the area, including shops and restaurants. West Drayton is on the cusp of transforming into the next big place for commuters into the capital.

Not only that, West Drayton is right next to London Heathrow, one of the world’s major air hubs. This makes travel to and from the area easy from countless places across the world.

Serviced apartments in West Drayton from TheSqua.re offer all the comforts of home and more. Every one has been selected for its modern appearance and tasteful decor. Here’s a selection of properties in and around the West Drayton area: 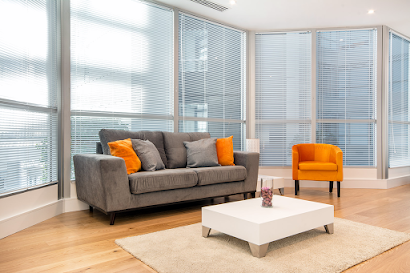 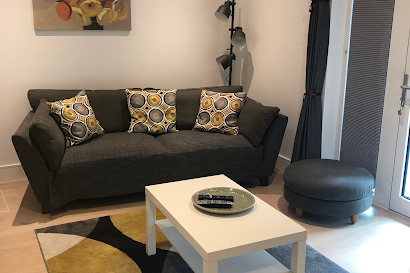 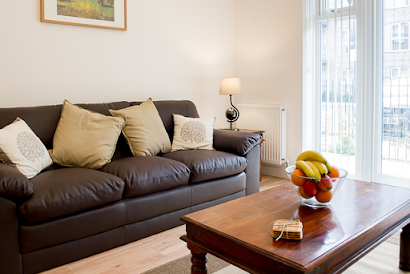 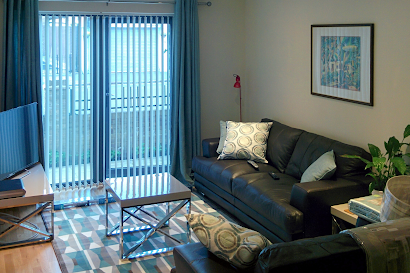 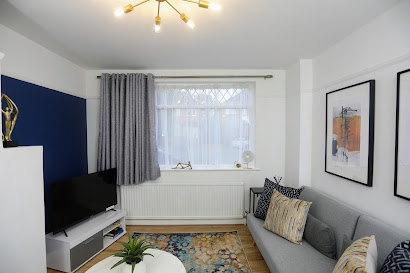 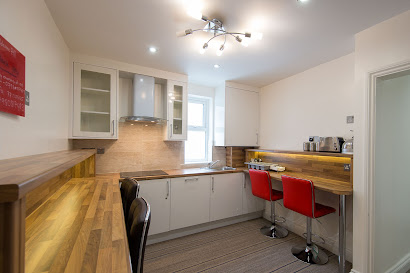 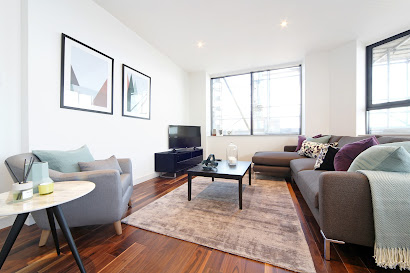 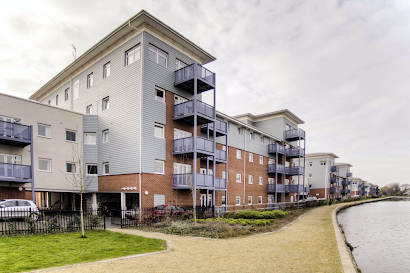 Due to its proximity to London Heathrow airport, West Drayton is a very popular place to stay for business travellers going to the country to work in the capital. This is especially for short term stays where the proximity of the airport makes entering and leaving the country as hassle free as possible.

A ten minute journey to the airport can’t be beat, especially if faced with a long flight.

The new railway line will also see travel times to London stations such as Canary Wharf, Liverpool Street and Bond Street cut almost in half. There is already a well-established rail route to London Paddington in place.

Serviced apartments in West Drayton are becoming much sought after by business travellers who are looking for a more residential feel to their accommodation. Feeling at home is essential to any stay, but especially for those staying for the medium and long term. Comfort is key.

With that in mind, all the apartments from TheSqua.re offer all the imaginable mod-cons including an up-to-date TV, high speed internet, air conditioning, a comfortable living area (separate to the sleeping area) and a fully equipped kitchen.

Getting off of a plane at Heathrow and being in a serviced apartment in West Drayton within 10 minutes of leaving has its obvious attractions. Especially for those getting off of long-haul flights. However, some leisure travellers may be put off by the fact that West Drayton seems so far away from Central London when compared to the alternatives.

London is one of the most popular tourist cities in the world and as such it is extremely busy, twenty four hours a day, seven days a week. For someone who wants to be amongst the action at all times, then accommodation in the West End is ideal. For those who want to come back to a quiet residential area at the end of the day, then West Drayton is the place to stay.

Serviced apartments in West Drayton are ideal for those people who go on holiday and want to experience life like locals. There are very few natives who live in the West End!

West Drayton is full of wide open green spaces, reservoirs and traditional old pubs and restaurants. The apartments offered by TheSqua.re are nestled amongst all that and give a unique experience of staying in a home away from home.

Living areas and fully equipped kitchens come as standard. Nobody wants to come back from a long day’s sightseeing to be confronted by a bed in a single room. Every apartment is unique but is guaranteed to offer modern, tastefully decorated rooms and a host of amenities to make a holiday stay as comfortable as possible.

Where to Stay in West Drayton

West Drayton is a place with plenty of charm and has huge amounts to offer for those seeking accommodation with a more residential feel.

The Green is the focal point of the town and a much sought after place to live, surrounded as it is by quaint houses from both the Victorian and Edwardian periods.

The station area of town boasts some of the more imposing properties to be found in West Drayton. This is where the larger period properties in the area can be found.

For even larger properties with huge gardens and views of wide open spaces and even the river, the area around Colne Valley Regional Park is recommended.

The more modern properties in the area are concentrated in and around the new developments in Drayton Garden Village.

Far from being just a commuter town in the shadow of Heathrow Airport, West Drayton has an identity all of its own. Here are a few facts about the local area.

Up until 1961 West Drayton was still considered a village. This was until it officially became part of Greater London in 1965.

The earliest surveys of West Drayton date back to the 16th century. Though the area was occupied hundreds of years beforehand.

The most prominent natural feature is the River Colne.

West Drayton lies in the middle of two important ancient roadways. The London to Bath road and the London to Oxford Road.

Cost of Living in West Drayton

The appeal of West Drayton is obviously its commuter links. People who work in London choose not to live in Central London for two reasons. Firstly, the expense. Living in Central London is prohibitively expensive and most people would struggle to afford it.

Secondly the peace and quiet. London is one of the most famous and popular cities in the world. Whilst some tranquility can be experienced in its many parks and green spaces, it is still a place which is busy, all of the time! It is rarely peaceful.

People like to escape the hustle and bustle of the city at the end of the working day and serviced apartments in West Drayton allow them to do that. A tranquil, home from home, in a space with less people, less buildings, more greenery and in which it’s possible to live at a fraction of the cost when compared to being closer to London.

Staying in West Drayton means staying on the outskirts of the city proper, but still within commutable distance and with fantastic links to London Heathrow Airport and the world beyond. Here are some tips for making the most out of a stay at serviced apartments in West Drayton.

Use public transport to get into Central London. A car may seem the cheapest way but adding in congestion charges and car parking fees (not to mention finding parking) makes it both expensive and stressful.

West Drayton is well located for business with offices and headquarters at Stockley Park.

Make the most of arrival and departure days. Being so close to Heathrow gives extra time for leisure!

If travelling with kids, the UK Legoland is just 8 miles away.

Things to Do in West Drayton

West Drayton is ideally located from which to enjoy not only London itself, but the west of Greater London and beyond.

Q. What are the most popular landmarks in West Drayton?

West Drayton and the surrounding area have plenty of places to see and enjoy. Here are a few places that might make a good photo.

Q. What are some free things to do in West Drayton?

West Drayton has plenty of enjoyable walks and parks, but for free things to see and do, a bit of a trek into London is required. The major museums at Kensington are all free and include:

Q. Are there many excursions to be had from West Drayton?

West Drayton is well connected so excursion opportunities are aplenty. Legoland and Windsor Castle have already been mentioned. There are also trips to Stonehenge available, or the historic cities of Oxford and Bath.

For those that like rugby, the home of English rugby, Twickenham, is fairly close and offers plenty of tours outside of the matches themselves.

Or for something closer to home, the British Airways Heritage collection is always popular.

Q. What are the most family friendly things to do in West Drayton?

Most have already been mentioned. Legoland is the most family friendly and kid-centric thing to do in the area. Although kids who like planes and rugby might feel like a visit to the BA Museum or Twickenham would be more desirable.

The famous museums of London are just a train and tube ride away too, and these can be free, though a contribution is always recommended.

Places to Visit in West Drayton

Staying closer to home can be preferable and West Drayton has some places to visit in the local vicinity which are some of the most popular in the UK.

Places to Eat in West Drayton

West Drayton isn’t in Central London so the top end restaurants with celebrity chefs at the helm are fewer and further between.

However, like most of London and the south east of England, West Drayton has an eclectic mix of restaurants and eateries to suit all tasted and budgets. Thanks to the proximity of Heathrow, there are also a fair few hotel restaurants to try too. Here are some of the most popular places with locals.

London is renowned for its shopping and it is all accessible from West Drayton. However, the UK loves a shopping mall and West Drayton has a few much closer to home.

It’s difficult to fairly describe the transport options in West Drayton as they aren’t all available yet! The arrival of Crossrail will change the transport possibilities beyond recognition.

At the moment West Drayton station provides direct services to London Paddington in a journey that takes around 30 minutes. It is also possible to get to Reading and Oxford and these journeys take 35 minutes and 1 hour and 20 minutes respectively.

Crossrail will make West Drayton one of the most sought after commuter towns in Greater London. The line will greatly reduce the travel time into London and provide access to Canary Wharf, Liverpool Street and Bond Street, halving the current time it takes to reach all of these stations.

West Drayton has great access to England’s road network too, with the M3, M4, M25 and M40 just minutes away.

And of course, its proximity to one of the world’s busiest airports gives it access to more than 180 destinations across the world.

London weather is only predictable in one way, it is always unpredictable. Although it is fairly mild all year round there is the odd chance of a very hot day or a very cold day. There is also a much greater chance that it will rain at some point!

Tips for coping with London weather? Take plenty of layers, the option to put on or take off is always good. Take waterproofs, take an umbrella and always know where the nearest pub is in order to avoid an inevitable downpour.