Manchester serviced apartments are great options for all kinds of travellers. You will find many furnished apartments in Manchester. They take care of your basic requirements with elan. These units cater to all requirements while offering great amenities too.

Some of the best Manchester serviced apartments include:

Our apartments come with facilities like Wi-Fi and concierge services. There are well-equipped kitchens for home cooking as well. You can also expect several other add-ons at your apartments.

There are many benefits of booking furnished apartments in Manchester. These units offer the best accommodation for all types of travellers. They are also ideal for new residents settling into the city. They come with greater privacy and flexibility alike.

You will also find many amenities on offer. You do not have to worry about legal and maintenance hassles. We also take care of deposits and utility bills. They lie near public transportation facilities and business hubs. Tourist landmarks are also located near our Manchester apartments.

The best part is that you get round-the-clock service and support. You can also find apartments in various configurations. They are ideal for both short and long-term stays. You will find units with luxurious interiors at prices.

We offer the best corporate housing Manchester for travellers. You will find the best units with Wi-Fi and other services. We also offer flat-screen televisions and well-equipped kitchens. Brainstorm with colleagues in your plush living room. Invite guests over without hassles. Relax after a hard day’s work with entertainment at your fingertips. Cook your own healthy meals whenever you wish. Reach out to us for resolving your queries. Find business hubs and public transport facilities nearby. In a nutshell, you can enjoy a memorable stay in Manchester.

We offer many holiday apartments Manchester for guests. Families and couples can have a great time. Groups of friends may also book our apartments. We offer spacious apartments for every need. Find all the amenities you need on a regular basis. These include appliances, well-equipped kitchens and Wi-Fi. There are flat-screen televisions for entertainment. Find tourist landmarks and transportation facilities nearby as well.

Our Manchester serviced apartments are ideal for short-term stays. You will find short term rentals in strategic locations. Access business and tourist hubs with ease. Find everything you need nearby. We offer units equipped with the best amenities for guests. From cooking to appliances and Wi-Fi, it is a lengthy list! You can also expect round-the-clock support for addressing your queries.

Places to Stay in Manchester

There are several places worth staying in Manchester. They include the Northern Quarter and Chinatown. You can also consider Belle Vue and Spinningfields. You may also try Trafford Park and Old Trafford.

Manchester is one of the UK’s greatest cities. Here are some interesting facts about it:

The Greater Manchester South Zone touched GVA of £34.8 billion. In 2002-12, growth was 2.3% higher than the national average. Manchester is home to many global corporates.

The Manchester Airport is the main aviation hub here. The airport is the third-busiest in the UK. There is a small City Airport to the west of the city center. It was the first such municipal airport of the city. It only offers general aviation and private charters today.

Cost of Living in Manchester

You can expect to dine at a restaurant for approximately £15. One-way transportation tickets cost £3 on average. Monthly passes come for £75 as per estimates. Rental accommodation hovers between £500-1,900 each month. Utility bills are usually around £176.28 per month on average.

Here are some tips for travelers to Manchester:

Things to do in Manchester

Manchester offers a plethora of things to do. Here’s looking at some of them.

Q. What are the most popular things to do in Manchester?

Popular things to do in Manchester include the Manchester Opera House. You can also visit the Chinatown and Museum of Transport.

Q. What are some free things to do in Manchester?

Free things include the John Rylands Library and Manchester Art Gallery. You can also visit the Museum of Science and Industry.

Q. Does Manchester have many romantic attractions?

Q. What are the most family-friendly things to do in Manchester?

You can visit Lark Hill Place or Play Factore. You can also explore the Greater Manchester Police Museum.

Q. What are the more unusual things to do in Manchester?

Unique things include the National Football Museum. You can also check out Affleck’s Palace and The Washhouse.

Places to Visit in Manchester

Here are some of the best places to visit in Manchester:

Places to Eat in Manchester

You can check out Adam Reid at The French for its scintillating food. Mana is another award-winning restaurant. The sole one with a Michelin star here, it offers 14 dishes. Tattu offers Oriental fare at Spinningfields.

Some of the top street food destinations include Mowgli Street Food. Other joints include Mackie Mayor and Street Guys.

Manchester offers various shopping centres for guests. These include the Trafford Centre and Arndale. Other destinations include Market Street and Exchange Square.

The Manchester Rail serves the city. There is also the Metrolink light rail network. Bus services are also available. Manchester has its own airport.

Manchester has comfortable summers. Winters are chilly and long. The best time to visit is between late June and late August. 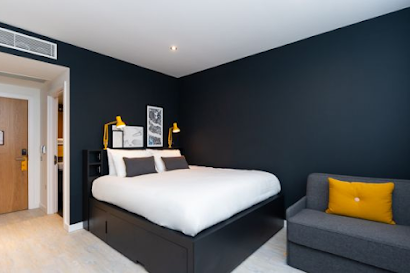 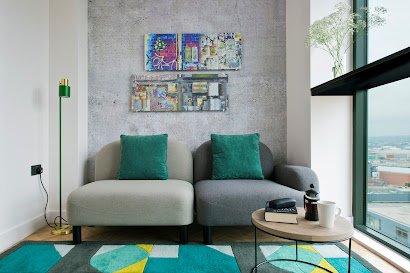 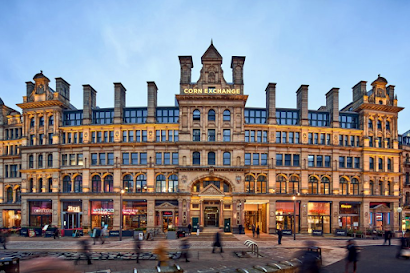 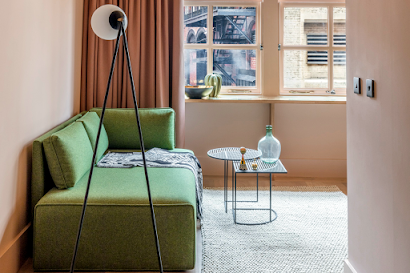 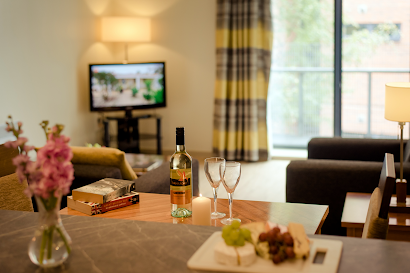 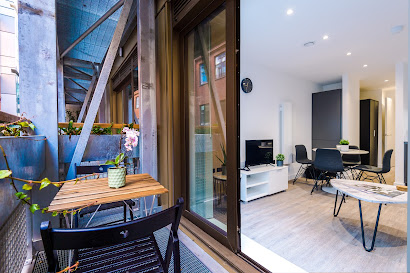 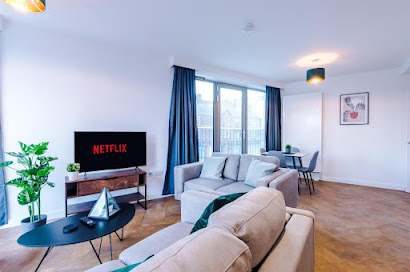 Things to know before booking serviced apartments in Manchester

Manchester, is not only home to its competitive and obsessive football teams, but it is widely known for its active and vibrant nightlife. But there’s also the myriad museums as well as beautiful parks that are just apt for morning walks and jogs. As such, there are quieter and busier areas in the city for visitors to pick. As always, there are the best of the best districts. Some of the ones that deserve a mention include:

Each one of the districts has its own unique feel and will make any short or long term stay in Manchester all the more perfect - for business or leisure.

Every individual, irrespective of whether they are sports enthusiastic or not, is well aware of the fact that Manchester is home to the football clubs, Manchester United and Manchester City. However, there are more facts about this city that are worth mentioning, like the ones below:

A few more trivial facts include:

A couple of facts of its economy are:

This ever-growing city also has one of the busiest airports in the world, where it serves over 200 destinations, more than any other airport in the UK.

Tourists visiting Manchester will be spoilt for choice. The plethora of options that this city provides is incredible and will bring into question whether the guest can see everything they need to before they leave. To help out guests, here’s a list of answers to some of the most frequently asked questions:

What are the most popular things to see in Manchester?

Some of the most popular things to see in Manchester are:

What are some free things to do in Manchester?

Some of the free things to do in Manchester include:

Where should you spend your nights in Manchester?

Places to Visit in Manchester

Manchester is indeed a unique place. Not only has it retained the culture of the medieval and Victorian era, but it is also a hub where science, technology, and innovation were incepted. Here are the places that are a must-visit in Manchester:

Places to Eat in Manchester

Either we ‘eat to live’ or ‘live to eat’, the choice between the two phrases is very subjective. However, when it comes to travelling to a different place, these two phrases seem to go hand-in-hand. When visiting an English city, trying out its local cuisine will be more of a luxury for most of the tourists.

What are the key English foods I should eat in Manchester?

These are the top English foods you need to try while in the city of Manchester;

What are the best restaurants in Manchester?

Below are the top restaurants in Manchester:

What are the poshest restaurants in Manchester?

Those that want a lavish experience in Manchester should eat at:

What are Manchester’s cheaper dining options?

Those that want to save on their dining experiences should try:

No one can qualify to be a traveller if they don’t taste the street food of their destination. Street food not only offers the best local cuisine, but it also adds value to the pockets. Here are the best street food vendors to try in Manchester. The Curry Mile in Manchester deserves a special mention, a large number of restaurants, take-away and kebab corners from South Asia and the Middle East flourish at this stretch.

Some of the highlights include:

Carrying a physical memory lasts for a lifetime, and that’s where shopping comes into it. We’ve all wandered around huge cities and sidewalks finding something that’s both inexpensive and precious. Shopping in Manchester is no different, and delivers retail joy to those who love gifting, decorating their house or buying loved ones fabulous presents.

Some of the best places to shop in Manchester include:

Tourists can consider themselves to be blessed if they choose Manchester as a destination for their vacation, as they have a plethora of transport options to choose from. Almost all the countries in the world have a direct flight to Manchester Airport, making it one of the busiest airports in the world. Trams and buses are in abundance, which makes it a popular choice among travellers and locals, they travel within the frequency of 6 to 12 minutes and covers the major points of Manchester.

Travelcards are available under the System One banner. This system offers multi-mode travel passes including bus, tram, and train. The passes are on the day, weekly, monthly and yearly basis - and can thus vary in price.

The climate in Manchester brings mild summers and cool winters to the city. The daytime during summer is usually 20 to 25 degrees Celsius and remains that way until August. The city has a comparatively high humidity level and snowfalls are not common due to the urban warming effect. Winters, as expected are mostly cold with temperatures dropping to minus degrees. Overall, Manchester, be it summer or winter is the best city to experience what it feels like to be in an English City.