Often described as the cultural capital of Australia, the city of Melbourne is a premier destination for travelers. With an abundance of contemporary and plush accommodation spread throughout the city, it may often be daunting to narrow down the optimal serviced apartments for a comfortable stay.

For a wide range of furnished serviced apartments in Melbourne to choose from look no further than TheSqua.re’s selection of modern and luxurious service apartments. Delivering premium and global standards across coveted destinations in Melbourne; the exacting criteria puts into perspective style, comfort and luxury to offer the most authentic results for a desirable stay.

Business or leisure, you have the luxury to book your destination across the many areas of the city; each place offering speedy transit to essential landmarks.

Furnished Apartments in Melbourne are increasingly becoming the accommodation of choice for travelers due to their range of advantages. Whether traveling with family or colleagues, such a venue offers increased flexibility, space, luxury and privacy.

Furthermore, legal and contractual affairs of booking are streamlined to the extent that all deposits, agency fees, maintenance costs, and bills are taken care of.

The location of the apartments is often always meticulously chosen to offer the most transit options along with close proximity to major areas and network hubs.

Warmth and luxury is an essential component of such accommodation. This aids long term visitors to create a home away from home while getting the opportunity to immerse themselves in the local culture.

Enhanced privacy with minimal intrusion along with the choice to turn your living space into a business conference or an entertainment pod, the flexibility to choose is immense.

Business is an integral economic stimulant for the growth of the city. Yearly entrepreneurs flock in excess to tend to official matters. Corporate housing in Melbourne offers comfortable and functional options for businessmen.

Every facility is luxurious and practical, offering a chance to unwind after a long day’s work. The facilities are always equipped with essential necessities such as high speed Wi-Fi, flat screens, a kitchen and a comfortable bed.

Business aside, Melbourne offers holiday travelers immense opportunities to pamper themselves with its impeccable food and wine, picturesque landscapes and urban hospitality. A plethora of options as per your mood, the National Gallery of Victoria, Melbourne Cricket Ground, Arts Center Melbourne, Eureka Tower, etc you are truly spoilt for choice.

Holiday travelers can ensure a comfortable stay by browsing through the catalog of Melbourne holiday apartments  offered by TheSqua.re. Every selection of the catalog ensures premium standards and homely comfort, along with close proximity to major destinations. Options for accommodation are available throughout several neighborhoods of the city including the Melbourne CBD, Kew, South Melbourne, Docklands, etc.

Where to Stay in Melbourne

Having won the accolade of the most livable city in the world on several occasions, Melbourne has something to offer everybody. Its diverse neighborhoods offer unique experiences revealing the shifting culture across different areas.

The coastal suburb of St. Kilda is an instant excuse to put on your swimwear and head to the many seaside theme parks, resorts, apartments and amusement parks. A hit with children, large groups and even backpackers, the summer months are particularly a good time to hit this coast.

Exploring the inner city Fitzroy is a great choice since it offers a chance to immerse into the cultural fabric of Melbourne. Complete with the cool and kooky, you can nestle away into its chic interiors or sprawl the night club hopping. Being fashion-forward is thehe tme of the area with a number of trendy and vintage clothing lines including Kloke, Alpha 60, Gorman, etc.

Staying at Melbourne CBD serviced apartments can offer similar fashion exploits at Bourke Street shopping centers. Furthermore, this is also a true tourist area since it is the hub of the local train network connecting you to the rest of Melbourne. Business travelers often find a quaint hideout around this area allowing them to tend to their meetings during rush hour and kick back in their spare time.

Some top choices of Melbourne neighbourhoods near our Melbourne serviced apartments include: 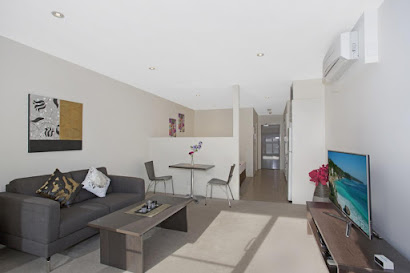 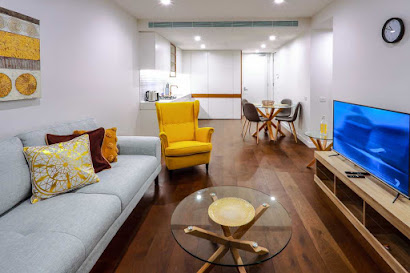 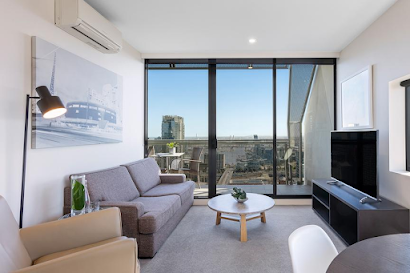 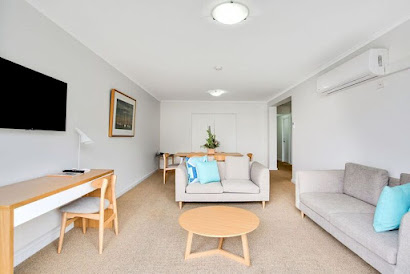 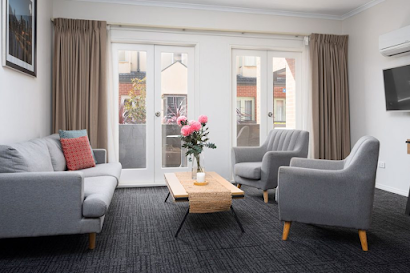 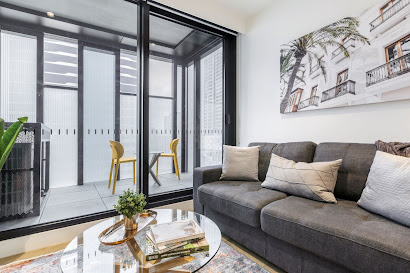 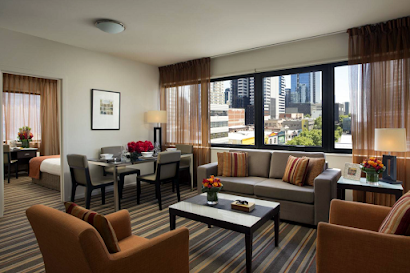 Things to know before booking serviced apartments in Melbourne

Post its European establishment in 1835, the city of Melbourne has consistently drawn migrants from several nationalities to establish their settlements, thereby leading to the exponential economic and cultural growth of the area, blossoming into the vibrant, melting pot it is today. Located at the south eastern coast of Port Phillip Bay, the heart of the city is run over by an extensive metropolitan culture.

Melbourne holds a key position in matters pertaining to the state of Victoria. It is the financial center and the seat of the government drawing businessmen and bureaucrats alike to attend to matters of finance and commerce.

The vibrant and upbeat vibe of the city can be felt as soon as you exit the Melbourne airport which is colloquially known as the Tullamarine. The primary airport in the city is also the second busiest in the country.

Apart from the Melbourne airport, the other prominent one can be found outside Geelong city known as Avalon airport. The former busiest, Essendon airport is located towards the central north western region of the city.

Traveling through parts of the city via busses, trams or trains can incur a monthly expenditure of around AUS$150. The choices in dining out, watching a movie or personal care are extensively catered to diverse financial needs. Planning ahead is always a good idea.

Often dubbed as the nation’s ‘European Enclave’, the city if full of diverse culture which makes it important to know how to navigate through the many streets, cuisines, markets and people. A general set of tips can make your trip smoother:

Things to Do in Melbourne

The cosmopolitan Melbournian culture offers a wide range of activities to indulge in. From great food, immersive architecture, chic fashion to urban heritage, you are spoilt for choice.

Q. What are some relaxing things to do in Melbourne?

With an abundance of sights to choose from a great way to get acquainted with the city is to head towards the sprawling city center. En route, there is a lot of street art that will capture your attention with its vibrant designs and bold patterns. Follow the lanes through tinsel town towards the botanical gardens which are a green oasis of tranquility and serenity. The stunning views account for postcard-like pictures.

Q. What are the free things to do in Melbourne?

A great opportunity to dwell into the roots of the city is by visiting its many free museums, libraries and bustling markets. Arts galleries such as The National Gallery of Victoria have the capacity to exhibit more than 73,000 pieces of stunning art. Furthermore, several city corners turn into their own art exhibitions with decorated sculptures scattered around parts of the city.

Q. What are things to do in Melbourne at night?

The city has a vibrant live music circuit and a pulsating nightlife which can be explored by visiting the many pubs, bars, restaurants and lounges. With local and international musicians frequently dropping in, this is the chance for most people to catch their favorite rock musicians live. You could even beat the crowd and head to the beach to catch the sunset at St. Kilda.

Q. What are some fun active things to do in Melbourne?

The average Melbournian is outdoorsy and full of energy, which has led to a tradition of outdoor life. Indulging in water sports at the St. Kilda is a common sight as is getting the occasional glimpse of little penguins in isolated corners of the beaches. Towards the outskirts of the city, adrenaline seekers and nature lovers could visit the Dandenong mountain ranges. Ride a bike, hike, bird watch or even plan a romantic getaway at these mountains.

Places to Visit in Melbourne

The city has a year-round travel appeal that equates to visitors being present all through. No matter the weather and time of year, there is something for everybody.

Places to Eat in Melbourne

Melbournian cuisine works with local produce and indigenous flavors to create stark, bold and adventurous palate. Innovation, science and vibrancy have led the city to become a forerunner in Australian cuisine.

Heading to the CBD comes with the opportunity to explore such culinary delights, amidst unmarked stairs, down graffiti jazzed lanes and on glittering rooftops. Look for Tipo 00 for Italian cravings and get served the most authentic ribbon-like pasta; explore Mediterranean palates at Bar Lourinhã along with great vegetarian options. Excelling in Middle Eastern cuisine, Bar Saracen makes the most authentic pita breads and dips. Smoked Argentinean food at San Telmo brings out the flavors of South America.

For dining around the beach at St Kilda, a popular spot is Stokehouse which provides regionally cooked seafood whose menu varies as per the season. Donovans is another beachside classic that offers picturesque views as you chow down. Towards South Yarra, a variety of native Australian meals can be tried at Da Noi, and fine Australian dining can be enjoyed at Matilda.

The bustling street food culture across the city has made compromising on flavor obsolete. The several convoys of food trucks and legions of street markets make it so that you can enjoy fine dining as you stroll through the graffiti-laden streets.

The sheer diversity in food across several local markets and vendors will leave anybody spoilt for choice. Options in Melbourne include Butcher’s Diner, Dodee Paidang, Miznon and ShanDong MaMa. Closer to Footscray you can explore Slice Shop for pizza, Roman’s Original for bistro cuisine or Issan Thai Street Food for piping Thai curry.

Not only the fashion capital of the country but even an important center for fashion across the globe; the city of Melbourne is extremely fashion-forward, often setting trends for the rest of the country to follow. Destinations such as the Chadstone Shopping Complex harmonically blend the tradition of shopping arcades with modern multi-level shopping complexes. Bridge Road in Richmond, Block Arcade and Brunswick Street in Fitzroy are also great spots to find the trendiest clothing and accessories.  Other notable shopping areas in Melbourne include the following:

The city circle tram offers a free guided tour of the city with commentary along with several points of interest. The metro trains of the city operate between flinders Street station and along the edge of the suburbs. The underground network covers all the important stations in the central business district including:

Busses also operate along the length of the city covering all major hubs such as the shopping centers, sports venues, eateries and architectural landmarks. A trio of ferries operates in certain areas shuttling passengers through the day.

The city has different climatic conditions year-round which makes it important to research and plan an itinerary. December to February is marked by sweltering heat which can reach as hot as 27 degrees Celsius.

At this time outdoor festivals and summer swims are a common sight. Through autumn both food and fashion festivals are organized city-wide all through the months of April and May. By June, the weather in Melbourne starts cooling and turns wetter as August approaches.

This is a great time to travel since fares and tariffs are heavily discounted. Spring season in October sees a revival of festivities and outdoor sports. At this time of the year, vineyard tours are also common.