Often overshadowed by its more famous neighbour, New Jersey is gradually becoming one of America’s more fashionable ‘places to be’. Its distinct culture and inimitable style offer everything one would expect from a big city, as well as numerous surprises that are unique unto itself. Jersey City itself features a thriving cultural scene in and around the Downtown area; from the Colgate Clock landmark on the waterfront through the Powerhouse Arts District, NJ’s border city showcases many talented local artists, as well as offering numerous artisan stores, bars and galleries. A melting pot of cultures, New Jersey is a thriving and diverse state that is proving increasingly popular with visitors from all over the world, with plenty of excellent accommodation deals to suit them.

From Newark to Trenton and Jersey City, visitors to The Garden State will find plenty to keep them entertained and plenty of furnished apartments for them to enjoy while they do. Serviced accommodation from TheSqua.re is the perfect way for tourists and business travellers alike to get out and explore NJ at their own pace. Combining the convenience of corporate housing with the comfort of furnished rentals, these apartments offer a level of privacy and come-and-go flexibility not to be found in many big-city hotels and allow guests to feel truly at home whether in New Jersey for the long term or the short.

The best furnished apartments in New Jersey are:

Every serviced apartment in New Jersey comes furnished with all the homely features one could require during their stay. Guests can enjoy the perks of a flatscreen TV, a fully equipped kitchen, gym access, and a stylish, modern lounge area, perfect for reclining after a long day. What’s more, all rentals from TheSqua.re provide luxury accommodation without breaking the bank. From chic studios in Newark to sprawling penthouses in Trenton, guests are guaranteed to find NJ accommodation deals to fit every budget.

Also Read: New Jersey Travel Tips - What to Do, See, Costs & Ways to Save 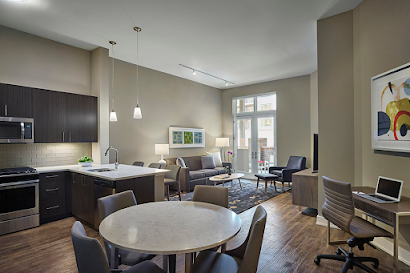 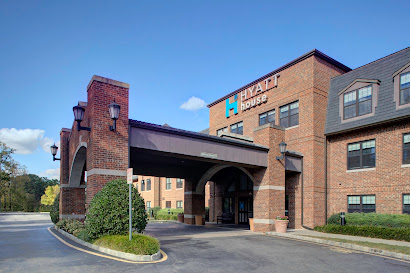 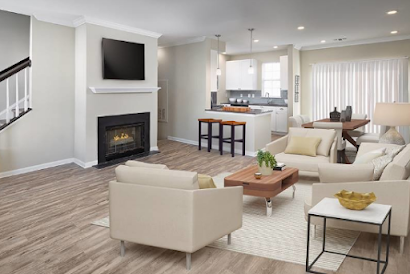 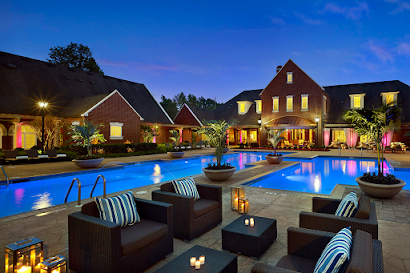 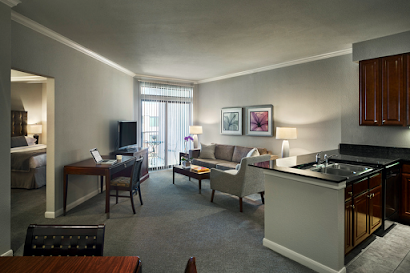 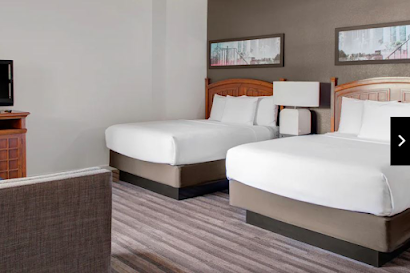 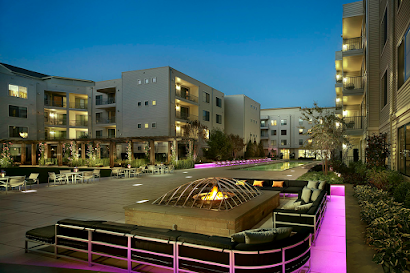 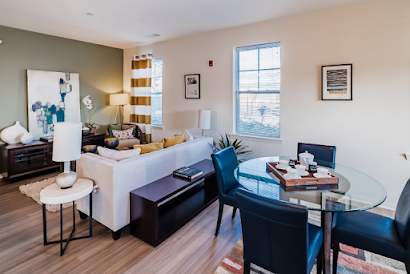 Things to know before booking serviced apartments in New jersey

Every city in New Jersey brings something different to the table, and many of the furnished apartments on offer reflect this urban diversity. Jersey City may be one of the most visited places in the state; on the border between NJ and NY, its eastern waterfront lies on the Hudson River, and trips to and from The Big Apple are a simple matter, thanks to the regular ferry services and Holland Tunnel. Furnished apartments around Liberty State Park in New Jersey will benefit from stunning panoramic views of the Manhattan skyline, with Liberty and Ellis Islands also a treat for the eyes. And for a fun family day out, the park’s Liberty Science Center features live animals, interactive exhibits, and an Imax Dome Theatre.

The cities of Princeton, Newark, and Trenton offer a more suburban, laidback vibe, with plenty of local history and culture to go around. Princeton is most commonly known for its Ivy League University; the campus features a Collegiate Gothic-style chapel and a vast collection of assorted artworks by contemporary painters and the old masters. Trenton is the capital city of NJ and the county seat of Mercer County and was very briefly the capital of the whole United States in 1784. Newark meanwhile is particularly well known as a center for performing arts, as well as its green spaces and historic Basilica of the Sacred Heart, which first started construction in 1898.

Finally, who could forget New Jersey’s iconic Atlantic City? A great destination for corporate getaways and party tours, this resort city is replete with boardwalks, beaches, and casinos for both those who like the excitement and those who like to take it slow. Originally a health resort in the 1800s, the city now comes furnished with high-rise hotels and swinging nightclubs, in addition to performances by famous comedy and music acts at all the notable casino venues. Apartments here can run up quite a price, so it’s always worth checking for the best deals with TheSqua.re before traveling.

Bordered by the states of New York and Pennsylvania, the peninsula of New Jersey constitutes one of the smallest states in America, though a large number of residents also makes it the most densely populated state. The area was first inhabited by Native American tribes such as the Lenape, who lived along its coast for more than 2,800 years before the Dutch and Swedish settlers founded the first European settlements. The English would later seize control of the region and name it the Province of New Jersey after the largest Channel Island. During the 18th century, NJ was the site of several important battles during the American Revolutionary War.

The state underwent a period of great industrial growth in the 19th century, with the cities Camden, Trenton, Paterson, Newark, Elizabeth and Jersey City, known as the ‘Big Six’, leading the charge. New Jersey’s location at the center of a group of developing cities (New York, Boston, Washington D.C., Philadelphia, and Baltimore) fuelled its rapid growth, with more people choosing to settle in the state and build up commuter towns and suburban neighborhoods outside the major cities. A thriving business hub today, NJ’s corporate attitude never needs to leave the boardroom, with the state also housing some of the region’s most stunning geographic wonders.

New Jersey’s population has boomed up to nearly nine million residents in recent years, with a diverse range of ethnic and cultural backgrounds throughout the state. Many expats and foreign residents consider The Garden State a second home, and so is it any wonder that both short-term rentals and extended stay apartments are so highly sought-after? A largely unknown part of America, there is plenty of things to see and do in NJ; it’s just a matter of getting out and finding it.

Culture and Shopping in New Jersey

What weekend away would be complete without the occasional shopping spree? Equally famous for some of its boutiques and designer stores as for its historic hotspots, there are plenty of opportunities in New Jersey for turning into a bonafide shopaholic. Both Jersey City and Atlantic City are prime destinations to indulge that retail urge: Jersey City has its own shops and outlets around the Waterfront and Downtown areas, and visitors can easily pop over to New York to lose themselves in the department stores across the river; Atlantic City meanwhile boasts many different shopping districts and malls, many of which are located around the city’s casino resorts. Playground Pier, Tanger Outlets, and The Quarter at Tropicana are just some of the many places in which visitors can spend all day browsing deals, and even then they’ll always be worth a return visit, much like New Jersey itself!

Places to Eat in New Jersey

From Grove Street in Jersey City to the diners of Trenton and the high-class eateries of Atlantic City, NJ’s diverse range of cuisine reflects its broad history and demographics. Whether it’s Italian, Indian or Korean visitors are after, there is plenty of choice throughout the state, and every New Jersey serviced apartment available to rent even comes furnished with a fully outfitted kitchen to allow for nights of home cooking whenever the mood is in.

New Jersey even has several unique dishes to entice tourists to try something new. These include the Sloppy Joe, which in NJ is more akin to a cold cut Dagwood sandwich than a hamburger, the Fat Sandwich (an entire fast-food menu, fries, chicken tenders, roast beef, rolled into a single load of bread), and the Trenton Tomato Pie, a worthy contender to its famous neighbour New York’s classic pizza. Edible heart attack or decadent delicacy? The jury is still out.

Getting Around in New Jersey

No matter if it’s a short or an extended stay in New Jersey, the one thing that is vitally important for any break in transport. Public transportation in New Jersey utilizes a combination of road, rail, air, and water: NJ Transit operates extensive rail and bus services throughout the state, ferry routes run between Jersey City and its neighboring New York, and Newark Liberty International Airport is one of the busiest airports in America. Wherever visitors choose accommodation, every furnished apartment in New Jersey will provide easy access to a local transport hub, opening up a whole host of opportunities for things to see and places to visit. Explore the best of New Jersey with ease, and discover America’s secret Garden State.

Like many cities in the west, New Jersey’s weather varies from season to season. its average temperature varies throughout the year, with the months of April to September generally being the warmest months. But, in the city during the peak of summer can get very hot, so guests need to be sure to stay hydrated.

New York weather in the winter can be very cold, with temperatures frequently reaching below zero Celsius. Staying wrapped up is a better option.