Furnished Apartments for Rent in NYC

New York, being one of the most traveled destinations in the world offers various accommodation options for travelers. Finding a place to stay in NYC, is not an easy task. When you travel with family and friends or with office colleagues, you need a spacious and well-maintained place to stay in. Our serviced apartments in New York are just perfect for both leisure and corporate travelers. No matter if you are traveling solo or in a group, for a short or long duration, these top serviced apartments in New York will provide you ample amount of space, privacy, and comfort.

Some of Our Best Furnished Apartments in NYC are:

Serviced apartments are widely becoming popular among tourists, be it leisure or corporate travelers. One of the main reasons for this popularity is privacy. When you stay at one of our serviced apartments in NYC, you get to choose from a studio, 1 and 2-bedroom apartments.

Staying in a serviced apartment can give you the feel of staying in a place that you can call home. All our furnished apartments in New York are designed to provide all the amenities and facilities that you get in your home and much more. Also, all the paperwork, contractual aspects are taken care of, so you don’t have to bother about anything.

When you stay at our top furnished apartments in New York, you can easily travel to any part of the city as there are one or more subway stations closeby. If you are traveling for work, you can enjoy facilities like concierge service, onsite lounge and meeting room, and much more.

These serviced apartments are also equipped with all the kitchen appliances you need, like a hob, chimney, microwave, dishwasher, coffee machine, and required utensils.  You don’t have to eat out every day, especially when you stay for a long duration. You can cook a healthy meal at home and enjoy it with your loved ones.

If you are traveling to NYC for work, our top serviced apartments in New York will be apt for you and your team. Separate bedrooms with attached bathrooms for you to enjoy privacy; large spacious living rooms with a dining area for brainstorming sessions or team dinners; study-desk for working from home; there is everything to keep your workstation perfectly organized and comfortable.

Being one of the most popular tourist destinations around the globe, New York attracts millions of tourists every year. If you are traveling with your loved ones, finding a safe, well-maintained, and spacious apartment to stay in is highly important. Our furnished apartments for rent in New York have a fully-equipped kitchen with modern appliances like a hob, chimney, microwave, refrigerator, and much more for you to cook at home. Also, all these apartments are safe and secure, and come with 24/7 surveillance.

Where to Stay in New York

Within its five boroughs, New York has dozens of neighborhoods with different charms, vibes, styles, and cultures. This megapolis is mostly mistaken with one of these five boroughs e.g. Manhattan. The other four are the Bronx, Brooklyn, Queens, and Staten Island. All our serviced apartments in New York are located in every corner, including most of the popular neighborhoods.

Some of these top neighborhoods in NYC are: 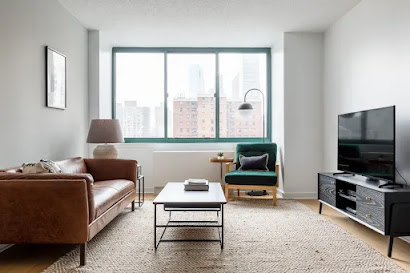 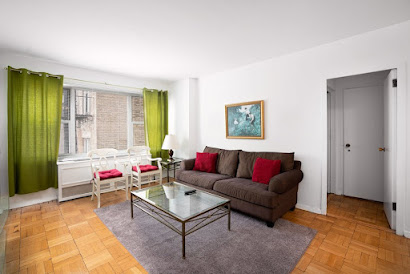 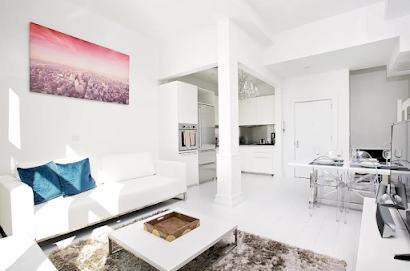 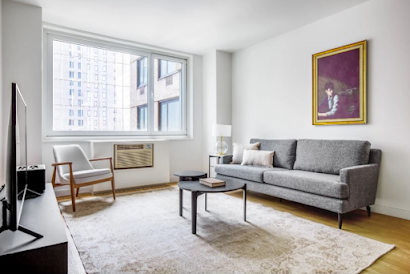 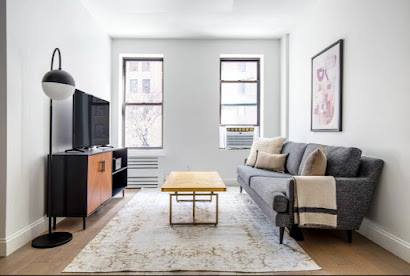 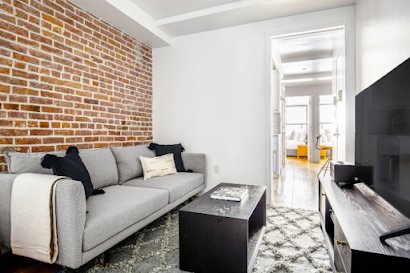 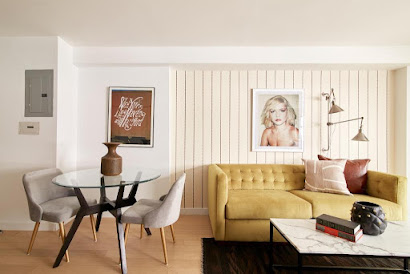 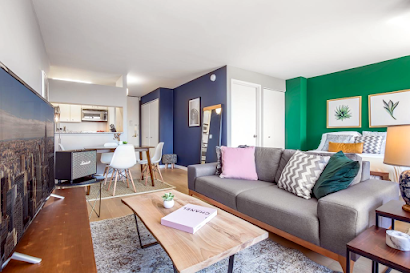 A Dutch colony way back in 1624, New York got its name after the English won the Anglo-Dutch War. In 1664 the name ‘New York’ (named after King James II) was given to the city. One of the most important ports under British rule, New York has a long history and great cultural significance. Home to many people from all around the world, New York has always won the hearts of everyone.

Here are a few facts about New York:

Cost of Living in New York

New York is known to be one of the most expensive places in the world. While all the other boroughs of New York are not that expensive, the overall assumption comes from Manhattan which is very expensive. The cost of living in Manhattan is 148% higher (as per 2019 data) than the average cost of any major city in the United States. The cost of consumer goods is also 24% higher in NYC. The restaurant prices are 27% higher than other cities in the US.

New York is quite expensive in terms of accommodation and food, so make sure that you plan accordingly and try to stay in a serviced apartment where you can cook your own meals to save. Especially, if you are traveling on a tight budget.

Things to Do in New York

There are so many things to do and see in New York that you will never get bored during your stay. From adventure to history, theatre and movies, there is everything here.

1. What are the most popular things to do in New York?

These are the top 10 attractions in New York:

2. What are some free things to do in New York?

Here are the free things to do in New York:

3. Does New York have many romantic attractions?

Here are the romantic things to do in New York for couples:

4. What are the most family-friendly things to do in New York?

Families should take their kids to these attractions:

Places to Visit in New York

Home to the world’s best art, architecture, music, and history, there’s a reason why New York is on every traveler’s list. Some of the popular tourist attractions close to our top serviced apartments in NYC are:

Places to Eat in New York

Being a multicultural city with people from all around the world, New York offers global cuisines. From a street-side cart to a Michelin Star restaurant, there is everything to choose from. If you want to explore various cuisines while you are in New York, the city won’t disappoint you.

Some of the best restaurants close to our top furnished apartments in New York are:

A few street food vendors in New York that are worth mentioning include:

These are the shopping attractions that you can visit during your stay in New York:

New York has a great public transport system which makes it easier to travel anywhere in and around NYC. The best way to travel in NYC is the subway as you will find subway stations in every corner of the city. Apart from the subway, there are buses, cabs, ferries, and boats available in New York as a mode of travel. Our top serviced apartments in New York are strategically located near to one or multiple subway stations, so traveling is never a task.

Some of these subway stations are: