Newcastle upon Tyne is a metropolitan borough in Tyne and Wear. Our range of New Castle serviced apartments are the ideal solution for all kinds of travelers. Fully equipped with everything you need for a comfortable stay in your very own home away from home. With luxury amenities like a gym, swimming pool, or cafe and all the required amenities furnished apartments Southampton is a boon to travelers. Further high-speed WiFi connectivity, smart appliances, and flat-screen TV make these apartments much more approachable. These serviced apartments Newcastle Upon Tyne are designed in such a way that they provide you with a memorable travel experience. Newcastle Upon Tyne serviced apartments are near major landmarks and transportation facilities. Browse our options and choose a property that suits you at your convenience.

Some Of Our Best Furnished Apartment Newcastle Upon Tyne

Our furnished apartments Newcastle Upon Tyne with easy accessibility and a serene environment make these popular ones. With high-speed internet connectivity and flat-screen TV in the living room, a spacious and comfortable bed with an attached bathroom in the bedroom, and smart and modern appliances in the kitchen, you will get a relaxed vibe and homely feeling or even better.

Safety and security are our priority. This is why all of our apartments are fully sanitized. These have a separate entryway with a doorstep delivery facility. These living spaces are also fire, electric, and gas safety checked at regular intervals. This is to make sure that you and your loved ones have a completely safe staying experience.

In today's world furnished apartments are a suitable alternative to a rental home.

Firstly, there is no hassle of getting an agreement done. You can pay agent fees when you decide to stay at one of these serviced apartments.

Another reason for these serviced apartments to be the talk of the town is the benefits you get here.

These ready homes have all amenities and facilities. Starting from furniture to appliances to utensils you will get everything under the same roof. These budgeted apartments are located at every major location. From Wi-Fi to flat-screen TV to an equipped kitchen and more, these apartments are filled with luxurious amenities. Guests can also avail themselves of on-site amenities like a sauna and a fitness center. You can continue your daily workout sessions to stay fit and healthy. These are stylish and the modern design of the apartments is a plus. The living room has luxurious chairs and a table. Bathrooms have all the basic toiletries, smart appliances, and laundry cleaning facilities.

These serviced apartments are usually located close to public transport systems like the metro or bus stops or train stations. Thus traveling to any part of the city is never an issue. You can also avail yourself of some of the extra benefits like grocery deliveries, swimming pool access, and much more when you stay here. Comfortable and luxurious, these serviced apartments are perfect for both short and long-duration of stays.

Modern travel needs a bespoke touch. Living spaces require that personal, human touch that everyone can find similar to their own home, a lived-in feel that makes it automatically familiar. At TheSqua.re, our corporate housing have that lived-in feel and an assortment of amenities that brings the feel of home along on the trip.

A flat-screen TV is included for entertainment in the evenings or on lazy mornings. We also install fully equipped kitchens. Thus our guests can create their healthy dishes and save money on other expenditures. A cozy bed is always a given so unwinding and waking up are super easy. And also, a free Wi-Fi connection ensures the possibility of working remotely. This also facilitates keeping friends and family in touch over long distances. Other important services that can be availed include a gym to work out in, a conference room, or a business meeting room.

The major benefit of these corporate housing is that all of them are located close to all major offices and tech hubs.

Whether you are traveling to Newcastle for a brief period or long term, the first thing that comes to your mind is the stay. To relieve you from this hassle our short term rentals Newcastle will welcome you wholeheartedly.

Our short term rentals are fully equipped to ensure all your needs are met. With ample space, these apartments come fully equipped with all the top-notch modern amenities you could ask for. There is a cozy comfy bed for a restful sleep. You will also find comfy sofas with a coffee table. An entertainment unit - flat-screen TV and high-speed WiFi connectivity are also present. There is a kitchen fully equipped. It has all the essentials from a hob to a large fridge, coffee machine, microwave, dishwasher, utensils, kettle, etc. Apart from all of these, there are extra amenities like concierge service, parking, doorstep delivery, and much more when you decide to stay with us.

All our holiday apartments are decorated with sleek and elegant furniture. These have soothing linen and upholstery, and modern appliances. These apartments have everything to provide you with a homely atmosphere. Ideal for spending your vacation, these apartments are ready to give you the comfort and peace of mind you require after a hectic day.

The bedroom has a spacious comfy bed with a bedside table, a chest of drawers, a cupboard, and an attached bathroom. Providing you with utmost privacy and comfort there are extra pillows and comforters. You will get premier linen in soothing colors to give you a peaceful sleep at night. The living room has comfy sofas, chairs, a coffee table, and a flat-screen TV with an entertainment unit and High-speed WiFi for you to enjoy your evenings without worrying about the next day. The modular kitchen is fully equipped with all energy-saving. These are a hob, microwave, dishwasher, refrigerator, coffee maker, and essential utensils for you to cook a healthy meal easily without much effort.

For someone who wants to continue their fitness regime, there is a gym, and for a relaxing experience after a hectic day, there are swimming pools, a spa, and much more.

Where To Stay In Newcastle Upon Tyne

One of the best places to stay in Newcastle Upon Tyne is near the city centre . Our guests will have a tremendous base to explore the city in their free time. Here you will get a wide range of high-street shops, restaurants, pubs, and more. This place is ideal for convenient transport links. Newcastle train station is perfectly located a short few minutes walk from our apartments.

Metro station is also within walking distance from our apartments located near Newcastle university.

Thus you can explore the town using our TheSqua.re New castle Upon Tyne serviced apartments. This can be your perfect base - only a few minutes from the metro station and steps away from all sights of the Quayside and everything the city has to offer. 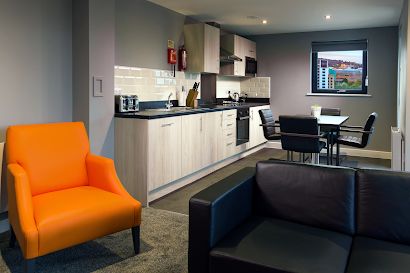 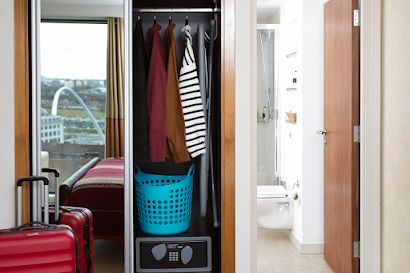 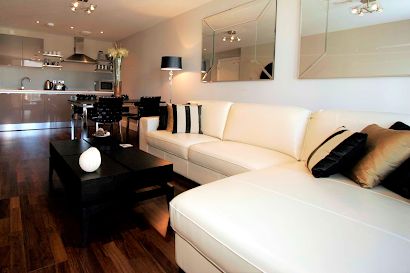 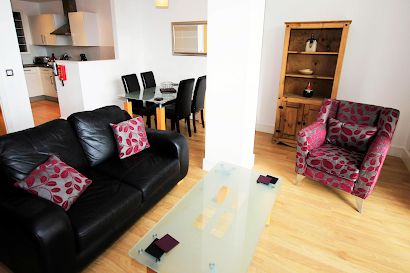 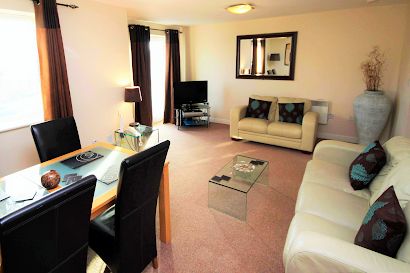 Things to know before booking serviced apartments in Newcastle

Where To Stay In Newcastle

Whether it is a business or a leisure trip, staying in any of the places will be the best choice, as each place has its speciality to offer. If a guest is here for a business trip, they will want to explore the city and hang out in the nearby cafes or pubs in the evening after a long day’s work, while those on a leisure trip will want to go sightseeing throughout the day, as there are abundance of things that Newcastle has to offer to the tourists.

Here are the best places to stay in Newcastle:

Each one of these areas has its own distinct character that reinforces the industrial history of the city and its own place as a destination that has so much to offer those that love culture.

When visiting a new place, getting prior knowledge before travelling is very essential, as it gives tourists an insight into the place including its history, specialties and other interesting and knowledgeable details. Here are a few interesting facts about Newcastle that should be known:

A few trivial facts include:

Here are a few facts about the city’s economy:

Things to Do in Newcastle

Newcastle possesses both Victorian buildings as well as plush shopping malls, is rich in economic and culture, making the city a must-visit. Whether travelling Newcastle for business purposes or vacation, these are the top places that one cannot afford to miss.

What are the most popular things to see in Newcastle?

These are the top 10 attractions in Newcastle:

What are some free things to do in Newcastle?

Here are 10 free things to do in Newcastle:

Where should you spend your nights in Newcastle?

This is where guests need to spend their night in Newcastle:

Places to Visit in Newcastle

With all the beautiful places adorned with spectacular buildings and various other attractions that Newcastle boasts about, exploring the city can be both exciting and tiring, as this city has lots of surprises and hidden gems that are worth exploring.

Places to Eat in Newcastle

Trips away from home are the only time that people get to explore, relax and most importantly have a break from their busy day-to-day schedule. Besides, tall trips are considered incomplete without trying the local grub. All short and long adventures must include relishing the local dishes and indulging with no shame.

What foods should visitors try in Newcastle?

What are the best restaurants in Newcastle?

Here are the best restaurants in Newcastle:

What are the top posh restaurants in Newcastle?

Here are 10 of the most expensive restaurants in Newcastle:

What are Newcastle’s cheaper dining options?

Those that want to save money a night out in Newcastle should choose the following restaurants:

There are foods that everyone should try, and surprisingly, many of these foods are found on the street, tucked away in the many stalls. On trips away, sometimes, street food can act as a saviour in terms of both money and taste.

Here are the best street foods stalls found in Newcastle:

Newcastle, like any other cosmopolitan city, has been growing and developing in terms of retailers and stores, be it the vintage shops to stylish boutiques. Few shopping spots will surely give good retail therapy.

The Intu Eldon Square, a well-known shopping centre, is truly the fashion house of Newcastle. Essential for fashionistas who would like to splurge on clothing and accessories, the shops here range from the high streets to top designers where shoppers will be spoilt for choice.

But where should guests head to for the local and authentic products to take home? Newcastle Gateshead is one such destination. This place offers locally made foods and hand-crafted gifts. Those who are ardent fans of vintage treasures can head to Tynemouth Market where the Grainger Market stalls will leave the stomach full and happy.

Newcastle airport is considered to be the 10th busiest airport in the UK. Being a metropolitan city, Newcastle, on the contrary, has a lot of green covers that add to its beauty. There are various other means of transport including a coach, train and buses, but among all these, buses are considered to be applicable for tourists. There are three main companies, including Arriva North-East, North Tyneside and Northumberland that operates in different locations, thus covering the entire city.

Located in the rain shadow of the North Pennines, the city is one of the driest in the UK. Newcastle experiences cool to cold winters, albeit the warmer in the rural areas around it. The winters in one hand are followed by warm summers, which means, the summer months have unusually long day time as opposed to the other cities in the UK.