When asked to name a famous Paris street, people will invariably suggest the Champs-Elysees. The two-kilometer boulevard is famous for being the shopping mecca of Paris, adorned with the Arc de Triomphe at one end and the Place de la Concorde at the other. As one of Paris’s most desirable locations, it inevitably boasts a huge section of exquisite accommodation. Champs-Elysees serviced apartments offer the ultimate way to experience Paris and the selection offered by TheSqua.re represent the finest and best-located properties available.

Champs Elysees apartments come in a variety of formats and sizes, but some of the most popular offerings include:

These properties all come with many of the benefits usually associated with hotels, such as room cleaning and reception services, but with the addition of more homely comforts, including the latest home entertainment systems. Furthermore, the inclusion of kitchen facilities means Champs-Elysees serviced apartments are far more suitable options for anyone planning an extended stay in Paris. 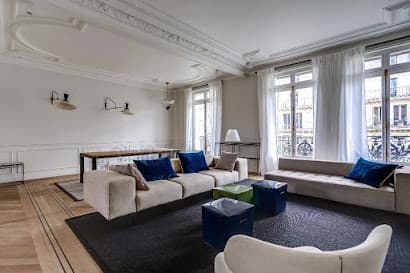 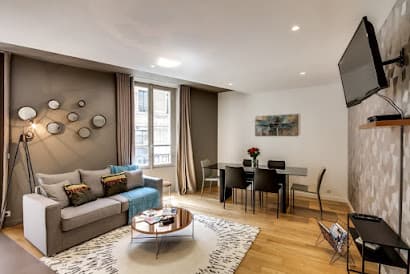 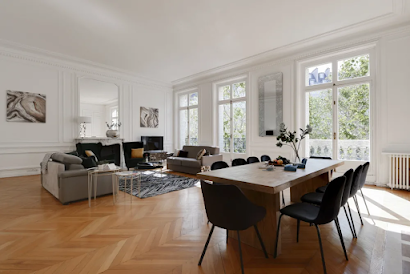 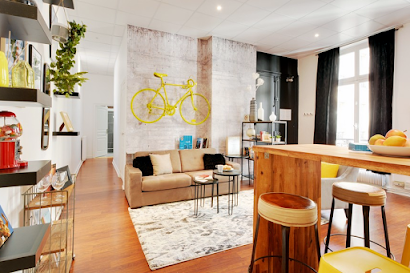 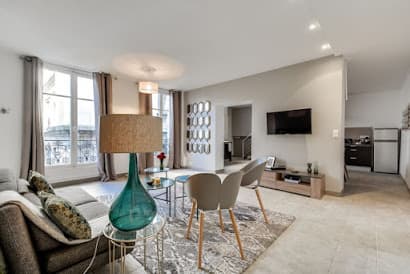 Where to Stay in Champs-Elysees

The Champs Elysees is perfectly situated in the center of Paris, between the famous sights of the 1st arrondissement and the commercial hub that is La Defense. This means that the area is just as popular with business travelers as it is with holidaymakers. Of course, being some two kilometres in length, anyone planning to regularly commute to the business district will want to find accommodation towards the western end of the boulevard (Arc de Triomphe), whilst those looking to enjoy the famous sights of the French capital may prefer to locate themselves towards the Place de la Concorde. There are plenty of streets connecting directly to the Champs-Elysees, with Rue Washington and Avenue George V being good options for those who do not wish to stay on the boulevard itself.

There are plenty of options when it comes to the type of Champs Elysees accommodation. However, luxury serviced apartments offer the most comfortable and impressive experience by far. Alternatively, it is also possible to find small, self-contained studios, which are often the more suitable option for single occupancy or anyone with budgetary constraints.

Paris is known for many things - culture, creativity, and innovation. It is also famously one of the fashion capitals of the world and anyone visiting the Champs-Elysees will quickly see why, as it is simply lined with boutiques and famous fashion houses. However, the area has a rich history that reaches beyond its current reputation. Below are a few interesting and surprising facts about the Champs Elysees:

Things to Do near the Champs-Elysees

The Champs-Elysees is essentially a very long street - which means it traverses several famous landmarks and locations. In fact, the boulevard also leads directly to two iconic attractions: the Arc de Triomphe and the Place de la Concorde. Of course, there are also numerous bars, bistros, cafes, and restaurants for those looking for a little refreshment. In short, the Champs-Elysees and the surrounding 8th arrondissement is one of the most exciting places to be in the whole city.

Q. What is there to do along the Champs Elysees itself?

The Champs-Elysees is primarily known as one of Paris’s top shopping destinations - particularly for the fashion-conscious - most first-time visitors are happy just to see the incredible fashion houses and independent boutiques. However, those not looking to shop can also enjoy people watching from a cafe, or taking in the view from atop the iconic Arc de Triomphe.

Q. Are there any free things to do near the Champs-Elysees?

The great thing about Paris’s world-famous landmarks is that many of them can be enjoyed without actually paying the entry fee - especially the incredible architecture of the Eiffel Tower or the Arc de Triomphe. Those looking to save money can also enjoy a stroll around the Jardins des Champs-Elysees, with their stunning gardens, fountains, and sculptures.

Q. Is the Champs- Elysees close to any other landmarks?

The Champs-Elysees runs for two kilometers, so those exploring the boulevard will find there are plenty of opportunities to branch off and explore some other nearby sights. Towards the east end are several of Paris’s most famous museums, whilst the Eiffel Tower is just a short walk from the western end. Alternatively, heading south will take visitors to the famous Palais Bourbon.

Places to Visit in Champs-Elysees

The area surrounding the Eiffel Tower is right in the heart of Paris - which means those staying in the area have easy access to the city’s abundance of iconic landmarks. Palais Bourbon itself is home to many of these and it is advisable to plan an itinerary when - especially if only for a limited time. Below is a list of some of the most famous landmarks and sights, both in across the city and within the 7th arrondissement:

Places to Eat in Champs-Elysees

Being in the heart of one of the world’s top cities for gastronomy and surrounded by stunning architecture, it is of little surprise that the Champs-Elysees and 8th arrondissement boasts a huge selection of great places to eat. Most of the restaurants are located down side streets rather than along the Champs itself, so it's a good idea to have a place in mind when venturing out to eat. Of course, there are plenty of options for fine dining. Restaurant Lasserre, Le Cinq, Le Georg, and Le Boudir all serve contemporary French cuisine and are highly regarded locally for their chic interiors - Le Georg in particular features a stunning interior with large bay windows adorned with sculptures.

Paris also caters to less formal dining and the Champs-Elysees has a great selection of cozy, low-key establishments that still offer wonderful menus. There are several bistros and brasseries that offer excellent traditional dishes, such as Le Pichet de Paris, Brasserie le Grand Palais, Le Cafe de Paris, and Chez Andre. Of course, most restaurants will serve French cuisine, but there are also several international places near the Champs Elysees - including Village during (Chinese), Siamin Restaurant (Thai), and Matsuri Marbeuf (Japanese).

Street Food near the Champs-Elysees

Street food is extremely popular in Paris and usually of a high standard. Of course, it is unlikely that any street vendors will place themselves outside the fashion houses of the Champs-Elysees, but there are still plenty of places nearby to enjoy various cuisines. Many of the street food outlets near the boulevard itself serve a selection of ethnic and international foods, such as Bagelstein, Rice Trotters, Thai Express and Mexico. However, those looking for street food in the Champs-Elysees should spend some time looking around, as there are often plenty of mobile vendors and pop-up restaurants.

The Champs Elysees is definitely the most famous best shopping area in Paris - being 1900 meters of famous retail brands, designers and shopping plazas. Visitors will recognize plenty of high street brands along the boulevard, such as Levis, Nike, and Gap, as well as a huge array of high-end designer boutiques, such as Cartier, Boss, Louis Vitton, Gucci, and Armani. There is also a good selection of independent stores - ranging from confectionary boutiques to traditional toy shops. Not only is the Champs-Elysees packed with retailers, but there are also several shopping arcades and malls in the vicinity. These include:

The Champs-Elysees area benefits from being part of Paris’s public transport network - one of the most extensive in Europe. It is made up of the metro, overground trains, buses, and a few tram lines - all of which offer a reliable and very reasonably priced service. The metro is usually the most convenient means of getting around the central districts, with the Champs Elysees being served by several stations, including:

Paris also has an excellent bus system, with 64 lines that are integrated with the metro to ensure complete coverage of the city. There are also some 47 bus services that run 24 hours a day.

Those planning to tour around the city have the option of purchasing the Paris Visite travel pass, which costs €38.35, for a five-day pass and offers unlimited travel across the cities public transport.

The weather in Paris changes according to the season. Winters can be cold, with temperatures in December and January often dropping to around 0 degrees, even pushing below freezing at night time. Typically, July and August are the warmest months for the city, with temperatures reaching over 28 degrees on average during the hotter periods. During the summer, it is advisable to find accommodation with air conditioning, as temperatures can stay high even overnight. Paris weather in September and October is often the most desirable, as during these months it is cooler than the height of summer but typically still dry, making this a popular time of year to visit the city.