Like so many Parisienne neighbourhoods, Saint Germain was once a favourite location for bohemian artists and writers. As such it boasts many of the hallmarks that make Paris one of the world’s most enigmatic cities: quaint cafes, chic shops, and stunning historic architecture. As such, serviced apartments in Saint Germain are amongst the most popular accommodation in Paris - for both corporate travellers and holidaymakers. TheSqua.re offer a selection of some of the finest Saint Germain apartments available - each having been chosen for its high-class interior, its range of mod cons and the desirability of its location.

Some of the best examples of our Saint Germain accommodation are as follows:

These apartments offer all the luxuries and conveniences associated with hotels, such as regular room cleaning services, but also have the added advantage of fully equipped kitchen facilities, which makes them the perfect accommodation for those making an extended stay in Saint Germain.

Also, find the best selection of Studio Apartments in Paris and book online! A BOHEMIAN PAST OF ST GERMAIN DES PRES NEAR THE LUXEMBOURG GARDENS & ST GERMAIN AN ICONIC LOCATION RIGHT NEXT TO LUXEMBOURG A LARGE PLUSH NEST NEXT TO ST SULPICE 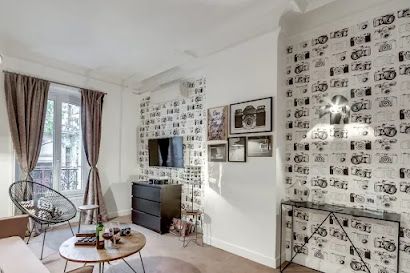 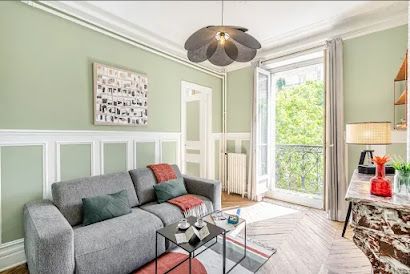 The Odeon and Mabillon Metro s...
7 The Odeon and Mabillon Metro s...
8 Where to Stay in Saint Germain

Saint Germain is geographically, economically and culturally right in the centre of Paris - presenting the ultimate location for anyone looking to spend a few days or more in the City of Lights. Located within the 6th arrondissement, Saint Germain is within a stone’s throw of several other famous Paris neighbourhoods, including the Latin Quarter and Luxembourg Gardens. Saint Germain itself is bursting with cafes, restaurants, markets and shopping streets and staying anywhere along Rue Jacob or Boulevard Saint Germain will put visitors right in the heart of the neighbourhood. Alternatively, those looking to experience both Saint Germain and the Latin Quarter might prefer somewhere along Rue de Four or Rue de Seine. Finally, those seeking views of the Seine itself may want to consider Saint Germain accommodation along Quai Malaquais.

Paris is regarded across the world as a leading city of culture, permanently at the forefront of artistic and cultural movements. Saint-Germain-des-Prés is one of the four administrative quarters of the 6th arrondissement of Paris, France, located around the church of the former Abbey of Saint-Germain-des-Prés. Located in the centre of the city, Saint Germain boasts stunning architecture, incredible shopping opportunities and a huge selection of places to eat and drink. Below are some interesting facts about Saint Germain:

Things to do in Saint German

Paris is full of incredible sights and thanks to its central location, Saint Germain is one of the best places to stay for those looking to explore all the city has to offer. Within walking distance of many major landmarks, the 6th arrondissement offers the quintessential Paris experience, its streets filled with culture, history and stunning architecture. Unsurprisingly, there are plenty of options when it comes to things to do in Saint Germain

Q. What sort of attractions does Saint Germain offer?

If there is one thing that Saint Germain offers visitors, it is a rich history. Home to the oldest church in Paris and a key location during the revolution, plus being a centre of the intelligentsia for centuries, there are numerous historic landmarks and points of interest within its picturesque streets.

Q. How long does it take to explore Saint Germain?

Like many of the older arrondissements, Saint Germain only covers a small area - just 2.15 sq km. Therefore, the neighbourhood can ostensibly be explored within a single afternoon. However, those looking to get into the cultural significance of the area will need a little longer - especially if they are planning to eat in some of the historic cafes, frequented by writers, artists and philosophers over the years.

Q. Is the Saint Germain close to any other famous locations?

Saint Germain is right in the centre of Paris, on the banks of the Seine. Visitors to the area will find that they are able to find plenty of other famous landmarks by walking ten minutes or less in any direction.

Q. What are some romantic activities near Saint Germain?

The Saint Germain neighbourhood itself is one of the most romantic in Paris, with its old-world cafes, historic streets and relaxed atmosphere. Those looking to mark a special occasion may also like to sample some of the world-class cuisines on offer or take a romantic cruise along the Seine.

Places to Visit in Saint Germain

Paris has arguably more famous landmarks per square kilometre than any other city on earth. As such, there is far too much to see and do in a single visit, but fortunately, Saint Germain’s central location means anyone staying there will be able to tick off many of the major attractions. Below are some of the most popular places to visit in Saint Germain, as well as the surrounding areas of Paris.

Places to Eat in Saint Germain

France is famous across the globe for its gastronomy and Saint Germain is one of the best places to experience the finest on offer. The neighbourhood is particularly noteworthy for its abundance of traditional cafes - another enduring symbol of the French capital. Its artistic heritage means Saint Germain is home to some of the most well known cafés: Les Deux Magots, Café de Flore, Le Precope, and Café Bonaparte to name but a few.

Like much of Paris, Saint Germain also has a fantastic offering when it comes to street food. Establishments such as Le Societe and Le Pre aud Clercs offer simple dishes that can be eaten on the move and there is also an abundance of fast food vans dotted around the area. However, it is the food markets where the 6th arrondissement really shines. One of the best takes place every day except Monday on the rue de Buci. Alternatively, La Grande Epicerie de Paris is a sprawling food hall, offering everything from French picnic foods to international street food.

Paris has a firmly established reputation as one of the fashion capitals of the world, and shopping in Saint Germain reflects this famous heritage. Le Bon Marche on Place Sevres Babylon is full of fashion boutiques, furniture shops and other artisan crafts. The neighbourhood also offers the famous green booths of the Les Bouquinistes - offering posters, prints and secondhand books.

Further to its picturesque shopping streets, there are also several malls and shopping centres nearby, including:

Paris has one of the most extensive public transport systems in Europe. It is made up of the metro, overground trains, buses and a few tram lines - all of which offer a reliable and very reasonably priced service. Thanks to its central location, Saint Germain is easily reachable from either Gare du Nord, Gare de Lyon, Gare de l’Est or Gare de Bercy. However, once in the city centre, the Paris Metro is the best way of getting around. Saint Germain des Pres is the local metro station, but there are also several others nearby, including some for famous locations. These include:

Paris also has an excellent bus system, with 64 lines that are integrated with the Metro to ensure complete coverage of the city. There are also some 47 bus services that run 24 hours a day.

Transport around the city can be paid for using the Paris Visite travel pass, which costs €38.35 for a five-day pass, which offers unlimited travel via public transport.

Saint Germain, like the rest of Paris, has seasonal weather that is fairly predictable month to month. Winters can be cold, with temperatures in December and January often dropping to around 0 degrees, even pushing below freezing at night time. Typically, July and August are the warmest months for the city, with temperatures reaching over 28 degrees on average during the hotter periods. Many Parisiennes leave the city during the month of August, as this is traditionally the holiday season. Weather in September and October is often the most desirable, as during these months it is cooler than the height of summer but typically still dry, making this a popular time of year to visit the city.