Some of Our Top Furnished Apartments in Philadelphia are:

Furnished apartments get numerous benefits that make them highly popular amongst both business and leisure travelers. They offer excellent proximity to major underground stations, metro stations, bus stops and key roads along with other tourist landmarks and corporate or business hubs. These apartments also take care of everything, right from deposits and bills to maintenance and agency fees, furnishings, bedding and other accessories.

The corporate housing in Philadelphia comes with several added amenities including swimming pools and gymnasiums wherever available, in tandem with offering the best facilities for travelers.

Being serviced accommodation experts, we understand how guests require a place that feels like home when they stay in Philadelphia. We offer warm and welcoming interiors, complete with luxurious furnishings and round-the-clock support and assistance for swiftly resolving all queries.

When it comes to corporate housing in Philadelphia, there are numerous options available in strategically connected locations of the city. These units are situated in close proximity to major corporate and business hubs while offering greater privacy, comfort and flexibility alike. They offer fully equipped kitchens, high-speed Wi-Fi and flat-screen televisions while providing ultimate relaxation and comfort after a hard day at work.

Short term furnished rentals in Philadelphia have gained in popularity amongst travelers since they are strategically located and offer ample comfort, convenience and privacy above all else. They are ideal for short-term stays ranging from a few days to a week and even more. They come with the best amenities and facilities in tandem with plush furnishings and more space than conventional rental accommodation.

Along with short term rentals in Philadelphia, there are impeccably designed short and long term holiday apartments for families and leisure travelers alike. These units offer more comfort, privacy and convenience along with enhanced flexibility. They come with top-class amenities like high-speed Wi-Fi, flat-screen televisions, well-equipped kitchens and a lot more. They are also located in close proximity to major tourist attractions and landmarks in tandem with public transportation facilities.

Where to Stay in Philadelphia

Philadelphia has several neighbourhoods that are popular with tourists and visitors, including Society Hill, Old City and Queen Village along with Rittenhouse Square, Chestnut Hill, Bustleton and University City. 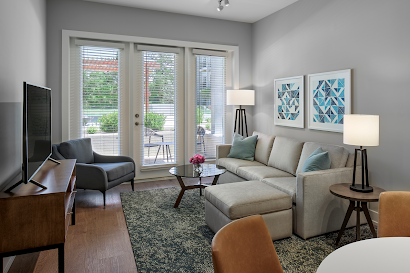 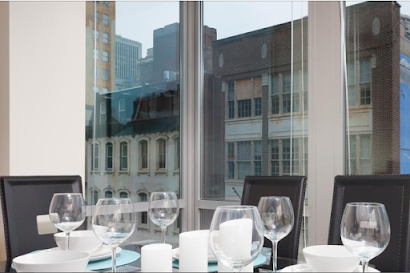 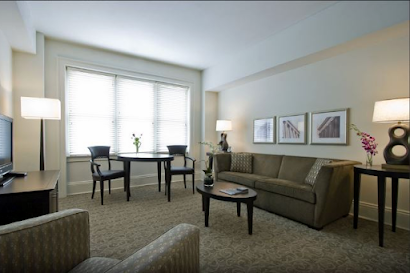 Things to know before booking serviced apartments in Philadelphia

Philadelphia, which is colloquially named Philly, is a city in Pennsylvania State, USA. It is the 6th highest populated city in the country and it has had similar geographic boundaries as Philadelphia County from 1854 onwards. It is also the economic and cultural hub for the entire greater Delaware Valley area.

Here are some more interesting facts about Philadelphia:

Philadelphia is a major academic hub today with leading colleges and universities and as of 2019, the city’s metropolitan area generated GMP (gross metropolitan product) of a handsome $490 billion. Philadelphia houses 5 Fortune 1000 companies and several other leading businesses.

Philadelphia International Airport is already going through a major infrastructural ramp-up and expansion for building passenger capacity and experiences. The 30th Street Station is the third busiest Amtrak railway hub in the country.

Cost of Living in Philadelphia

Restaurant meals may cost anywhere around $10-60 while one-way transportation tickets are priced at approximately $2.25-4. Monthly passes cost around $96 while basic utility costs hover around $150.32 on average. Rentals may hover between $1,300-4,000 approximately.

Here are some useful tips for visiting Philadelphia that you should keep in mind:

Things to Do in Philadelphia

Philadelphia has several wonderful things to do and activities to enjoy. Here’s taking a look at some of them.

1. What are the most popular things to do in Philadelphia?

Philadelphia offers several popular attractions and activities including taking photographs before the Liberty Bell, posing with the Rocky Statue and going up the Rocky Steps, enjoying authentic Philly cheesecakes, visiting the iconic LOVE sculpture, touring the Independence Hall and many more.

2. What are some free things to do in Philadelphia?

3. Does Philadelphia have many romantic attractions?

4. What are the most family-friendly things to do in Philadelphia?

5. What are the more unusual things to do in Philadelphia?

Unusual things to do in Philadelphia include The Moon Tree, Mummer’s Museum, Cave of Kelpius, The Nerve of Harriet Cole, The Whispering Bench, Eastern State Penitentiary and Mutter Museum.

Places to Visit in Philadelphia

There are several delightful places worth visiting in Philadelphia. These include:

Places to Eat in Philadelphia

Philadelphia offers a wide range of street food ranging from pretzels and cheese steaks to Israeli delicacies at Zahay or vegan meals at Vedge along with Italian Market for classic Italian fare and Double Knot that serves up tapas.

Shopping options at Philadelphia include the King of Prussia Mall which has 7 key department stores and 450+ outlets in tandem with several restaurants and boutiques. This is the USA’s biggest retail space while being the biggest shopping mall along the East Coast. Other shopping hubs include Nicole Miller at the Bellevue, DFTI Boutique, The Sample Rack, Sophy Curson, BHLDN, Kiki Hughes, Philly Bride and Dia Boutique among numerous others.

The Philadelphia International Airport is already going through an advanced infrastructural expansion exercise for scaling up overall passenger capacity and improving passenger experiences simultaneously. The Port of Philadelphia witnessed the highest percentage increase by way of tonnage that was loaded in the year 2017 amongst all major seaports in the U.S. It is already doubling overall capacity for accommodating most super-sized post-Panamax shipping vessels and more cargo. Philadelphia has its 30th Street Station which is the third busiest railway hub for Amtrak after Union Station in Washington D.C. and Manhattan’s Penn Station. This caters to more than 4 million intercity railway passengers every year.