Serviced apartments in Shanghai are ideal options for short or long term travelers alike. Shanghai is one of the world's greatest cities and comes with a plethora of accommodation options for guests. We offer the best-serviced apartments that help you work and play in style while offering privacy and comfort simultaneously.

Our Serviced apartments in Shanghai in terms of luxury short term rentals come with the best kitchen amenities, flat-screen televisions, free Wi-Fi, private access and room cleaning among other facilities. We also offer concierge and other services wherever available. Our fully furnished units ensure practical yet comfy accommodation solutions in Shanghai for extended durations.

Benefits of Furnished Apartments in Shanghai

Our furnished apartments in Shanghai are the preferred accommodation choice for business and leisure travelers alike. Of course, considering the benefits available, they are indeed the best choices. They are better alternatives to regular rental accommodation in Shanghai. They offer the right mix of convenience and comfort for guests.

Why are our serviced apartments immensely popular? You do not have to worry about any legal, contractual or other aspects. The agency fees, bills and deposit worries are covered. Furnishings, fixtures, bedding and other amenities are also provided.

Our furnished apartments usually lie in proximity to transportation options like Underground and metro stations and key thoroughfares. Some apartments also come with swimming pools, gymnasiums and other equipment.

You will find that our serviced apartments in Shanghai are ideal choices for extended Shanghai stays. They will help you savor the feel of the city and its localities for the long haul. Shifting here does not always have to be a stressful affair.

Being serviced accommodation experts, we understand how our guests want a place of their own to call home. We make sure that they get luxurious, warm and comfortable apartments. We provide all the vital amenities and connectivity benefits. We also strive to ensure the best service with a personalized touch. We take pride in addressing all issues quickly in the bargain.

Shanghai has gained importance due to the increasing domestic and international trade. So there is a great demand for corporate housing in Shanghai. Therefore, the corporate travellers to the city are posed with the question-” Where to Stay in Shanghai?”

For such business visitors, we have corporate housing to take care of their needs.

Our corporate housing in Shanghai options is ideal for business travelers. They come equipped with the best amenities and facilities. Find everything you need from bathroom amenities and comfy beds to well-equipped kitchens.

Enjoy plush furnishings and ample space alike. Use free Wi-Fi and flat-screen televisions along with accessing public transport nearby. You can also expect to stay connected to nearby business and commercial hubs alongside. Our corporate housing takes care of all your needs, right from recreation to practicality.

You may like short-term rentals in a city but they can be rented for less than a year. You have short term rental apartments in Shanghai. They are furnished apartments. Students or ex-pats who stay in Shanghai for less than a year usually take these short term apartments on rent. It is better if you go for a short term rental because a one-year rental requires some terms and conditions that may not be favourable. But the landlords don’t want short-term rentals too often because they have to find out tenants every time the tenant leaves after a short term.

Our Holiday apartments in Shanghai offer the best comfort, space and practicality for travelers. You will enjoy ample privacy with the best furnishings, appliances and fixtures. Enjoy free Wi-Fi, flat-screen televisions, well-equipped kitchens and security features.

You can swiftly access nearby business and commercial hubs along with public transportation. Get access to leading tourist landmarks along with shopping and dining hubs in the vicinity. At our holiday apartments, you will love the sheer space on offer for everyone in the family. Our units offer enjoyable experiences during your stay in Shanghai.

Where to Stay in Shanghai?

If you plan to ever visit the city and wonder where to stay in Shanghai, think of TheSqua.re, we are there at your service.

Shanghai is home to several diverse and beautiful neighbourhoods. The Bund and People’s Square is the downtown zone which has several landmarks. Old Town offers a more traditional glimpse into traditional Shanghai while French Concession is a quaint and culturally enlivened neighbourhood.

Other options include Jing’an serviced apartments which is home to a vibrant community with a global feel overall. Pudong is a newly blossoming locality with several skyscrapers and high-rises. Hongkou and North Shanghai are also good options for a localized Chinese feel while Xujiahui and South Shanghai are worth considering if you love shopping and simply hanging out in general.

Check all types of Apartments in Shanghai: 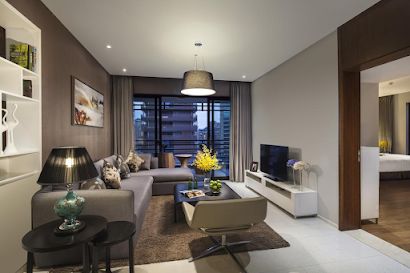 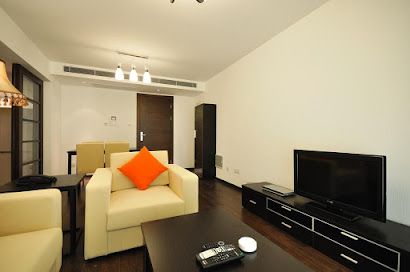 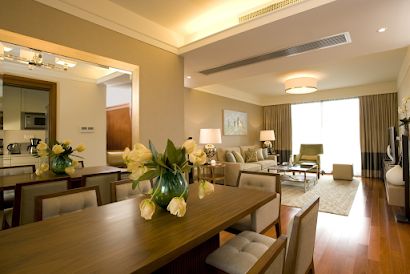 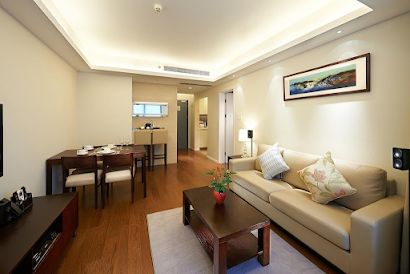 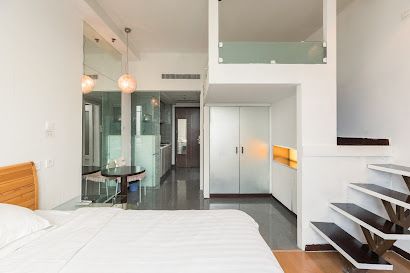 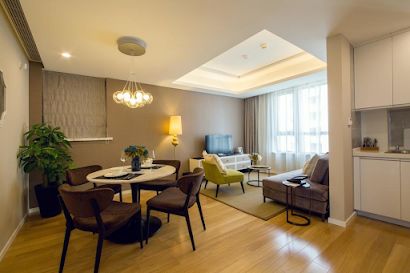 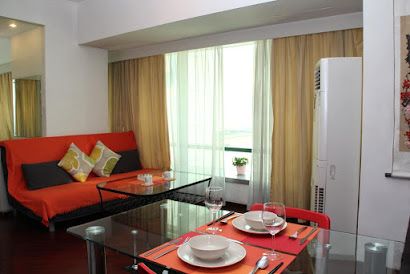 Things to know before booking serviced apartments in Shanghai

Shanghai is one of the four directly governed People’s Republic of China municipalities. It is under the governance of the State Council. Shanghai lies along the Yangtze’s southern estuary with the Huangpu River flowing through the locality. Shanghai is a global centre for technology, finance, manufacturing and research.

Shanghai has a flourishing economy as a global hub of innovation and finance. It is also a national centre for trade, commerce and transport. The Port of Shanghai is the busiest in the world while GDP touched CN¥ 3.82 trillion as of the year. The biggest industries in the city include IT, retail, real estate, fiancé, automotive manufacturing and machine production.

Cost of Living in Shanghai

Monthly rentals are usually between ¥3,000-30,000 for 1 and 3 bedroom apartments within and outside the City Center.

Here are some tips for visiting Shanghai:

Things to Do in Shanghai

You should at least once visit and admire the skyline of the Bund. The Bund is the place you must visit once and it should be on the list of your priorities. The Bund offers a beautiful skyline of the architecture of the past when the city was a British colony. You can see the big Huangpu River over here. You may like visiting Yuyuan which is one surviving dynasty of the Ming kingdom. Shanghai is also known for its scenery added by the beautifully decorated bridges, pagodas, and dragon walls.

Q. What are popular things to do in Shanghai?

Q. What are some free things to do in Shanghai?

There are some free things to do in Shanghai.

Q. Does Shanghai have many romantic attractions?

There are the following romantic attractions here:

Q. What are family-friendly things to do in Shanghai?

The families will enjoy the following things:

Q. What are unusual things to do in Shanghai?

You can do the following as unusual activities here:

Places to Visit in Shanghai

Here are the best places to visit in Shanghai:

Places to Eat in Shanghai

Shanghai is known for its delectable cuisine and bevy of restaurants. Find Lost Heaven which offers the best Yunnan meals while Old Jesse is all about local picks. Jian Guo 328 offers a cosy ambience while Hengshan Café offers Cantonese meals that will take your breath away! Other top picks include Mr and Mrs Bund, El Willy Spanish, Hakkasan and more.

Following are the best places to enjoy your food in Shanghai:

Shanghai street food is flavorful and diverse. Xiao Long Bao is worth savoring along with Shansi Leng Mian or eel noodle bowl. You will savor Dou Hua or the comforting dessert along with the Jianbing breakfast fare which is extremely popular. Other foods worth trying on the street include old-school BBQ Shaokao and Cifantuan which are actually glutinous rice balls.

Shanghai is known for its exclusive street foods:

Shanghai is not only the largest city in China, it is also a shopper’s paradise. You will find super malls, fashion stores, shops of handicrafts, fine tailors, electronics markets, and so on.

Shanghai shopping is all about frequenting the bustling Huaihai Road and Nanjing Road along with Yuyuan Garden’s outdoor bazaar. Check out the Cultural Street Market on Fuzhou Road and the Shimen Road clothing market. Xintiandi is another upscale shopping joint.

Metro, buses, and taxis are the principal modes of transport in this city. One can buy a shanghai public transport card to pay for the transport. There is a large bus network too in shanghai.

The Shanghai metro rapid transit integrates light metro rail and subway lines, covering the entire urban district and suburban districts. There are numerous metro lines, more than 400 stations and a whopping 704.91 km (it is the world’s biggest metro rail system).

The climate of Shanghai is subtropical. There is a maritime monsoon here. It causes humidity and rains. The summers are quite warm and muggy. The winters are cool and so are the falls. Midsummer is the best time to visit Shanghai. The average temperature typically varies from 35°F to 90°F and is rarely below 27°F or above 96°F.

The best time of year to visit Shanghai for warm-weather activities is from mid-September to mid-October.