Staying in Singapore will always be a fun and memorable experience although you will require proper serviced apartments in Singapore for a memorable and fulfilling stay. TheSqua.re offers the finest furnished apartments which emphasize upon the comfort, convenience and relaxation of guests above all else.

Every apartment offers unmatched experiences in Singapore with private and spacious apartments boasting of top-notch furnishings and fixtures. Properties have been carefully chosen to ensure proximity to major landmarks and hubs of public transportation. The apartments from TheSqua.re are ideal for all kinds of business travelers.

Benefits of Serviced Apartments in Singapore

For both long and short term stay in Singapore, serviced apartments are increasingly preferred by new residents and travelers alike. This is quite natural, considering the fact that serviced accommodation offers multifarious benefits. They are better alternatives for conventional rental accommodation, offering enhanced comfort and flexibility along with the best contemporary amenities and facilities.

Being serviced accommodation experts, we understand that our guests need a second home away from home. We offer luxurious and comfortable interiors for enhanced convenience while keeping the human touch intact via 24-7 assistance and support.

Corporate Housing in Singapore is always a preferred pick if you are landing in the island city for onsite assignments, meetings, conferences and the like. Singapore is one of the world’s biggest financial and business hubs with some of the biggest global MNCs present here. Singapore is hugely popular amongst business travelers who can now choose serviced corporate accommodation for extended stays.

These are bespoke units tailored to meet their needs with plush furnishings and fixtures, ample privacy and highly strategic locations. Within every corporate housing unit, travelers will appreciate the well-equipped kitchens, high-speed Wi-Fi connectivity, flat-screen televisions and a lot more.

TheSqua.re offers the best amenities & facilities, cutting-edge connectivity and entertainment provisions in every apartment. These apartments are found across all the fashionable parts of Singapore including Orchard Road and near the Changi Business Park. Stay near all the attractions you want with ample convenience in town.

Where to Stay in Singapore

Singapore has several prominent neighborhoods which promise fulfilling experiences for travelers. Orchard Road is regarded as the best location for tourists, offering upmarket shopping experiences with glitzy shopping malls and a lot more. You will find numerous luxury brand outlets here along with retail outlets galore.

Also Read: Best places to Stay in Singapore for Travelers

The Colonial or Historic District is centrally located with easy proximity to major restaurants and bars in Marina Bay and the Quay zone along with Bugis & Kampong Glam area street food joints and Little India. Marina Bay houses the city’s biggest attractions including the Marina Bay Sands, Gardens by the Bay, Merlion Statue and Esplanade- Theatres on the Bay. You can also try The Quays- Clarke, Robertson & Boat which are packed with restaurants, shops, nightclubs and more. 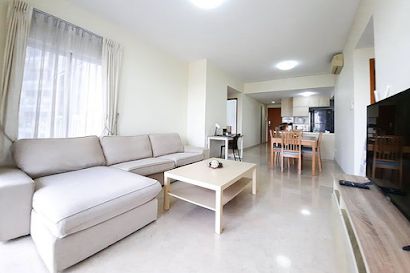 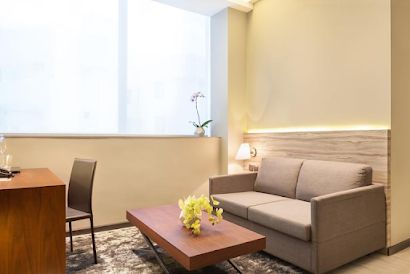 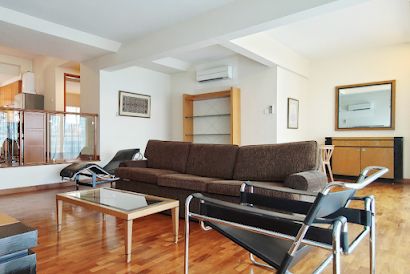 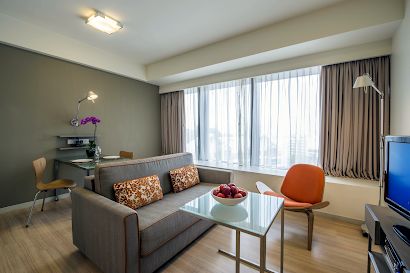 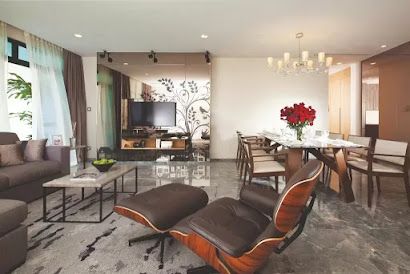 Things to know before booking serviced apartments in Singapore

Singapore is officially called the Republic of Singapore and is a well-known sovereign island city-State within Southeast Asia. It is a degree of latitude northwards from the Equator and borders the Straits of Malacca, Indonesia and the South China Sea. There is one main island adjoined by 63 satellites and islets in tandem with the sole outlying islet.

Here are some interesting facts about Singapore:

Singapore has a considerably developed economy and is a major global finance hub. Singapore is one of the few countries to have obtained the AAA credit rating courtesy of the Big Three for several years with a free and highly innovative economy. Singapore draws sizable foreign investments with the second highest GDP per capita as per the World Economic Forum ranking.

Singapore is a key global transportation hub and the Changi Airport is the major aviation hub for Southeast Asia. Other airports include the Seletar Airport and Kallang Airport. The Singapore Changi Airport has 100+ airlines linking to 300 cities in 70 countries and regions globally. Singapore Airlines is the national carrier.

Cost of Living in Singapore

The average cost of living in Singapore is on the higher side. For a single individual in the island city-state, average expenditure excluding rentals may touch somewhere around 800 SGD or roughly $575 USD every month. This is considerably higher for a family or four for instance. They will require close to $3,200 (USD) or 4, 400 SGD.

Most people have to earn 6,000 SGD for leading a comfortable life in Singapore. Rentals are quite costly with 3 bedroom apartment units going for 7,000 SGD per month in the Orchard Road and Central District. A similar apartment in the Woodlands neighborhood in the North District, will come for 2, 600 SGD every month in comparison.

Here are some helpful tips for visiting Singapore:

Things to Do in Singapore

Singapore has a plethora of activities and attractions for travelers in several categories. Here’s taking a look at the same.

Q1. What are the most popular things to do in Singapore?

There are several popular things to do including visiting Gardens by the Bay, Marina Bay, Singapore Botanic Gardens, Chinatown, Orchard Road, Singapore Zoo and Merlion Park.

Q2. What are some free things to do in Singapore?

Some free things to do include the Buddha Tooth Relic Temple, viewing wild dolphins at the Sisters Islands Marine Park, hiking at Mount Faber, biking at Bukit Timah Mountain Bike Trail and more.

Q3. Does Singapore have many romantic attractions?

Q4. What are some family-friendly things to do in Singapore?

Family-friendly things to do in Singapore include Sentosa Island, Changi Jurassic Mile, Sing Under the Sea at the SEA Aquarium, Jewel’s Canopy Park, Universal Studios and the Singapore Sports Hub.

Q5. What are the more unusual things to do in Singapore?

Some unusual things to do in Singapore include sidecar city tours, selfie coffee at the Selfie Coffee Café and visiting the Flower Dome and Cloud Forest. Pulau Ubin bumboat cruises are also unique experiences.

Places to Visit in Singapore

There are several places to visit in Singapore including the following:

Also Read: Fun & Free Things to Do in Singapore

Places to Eat in Singapore

Singapore has mostly hot and overcast weather with temperatures varying from 76-89 degrees Fahrenheit. The best time to visit is between early January and late March. You can visit from late July to early October as well.