Toronto is one of the major multicultural cities in the world and to experience that diversity, the city is visited by millions of people every year. The visitors are often torn between too many choices for their stay and are rapidly opting for serviced apartments in Toronto because of the convenience and comfort they provide. Thesqua.re offers aesthetically designed spaces with tasteful and modern furnishings in every major location of the city. The serviced apartments in Toronto are best suited for every length of stay, may it be a short-term visit or a long one.

Some of Our Top Furnished Apartments in Toronto include:

All of our Toronto serviced apartments are fully furnished and offer world-class amenities like- well-equipped kitchen, all the necessary electrical appliances, high-speed Wi-Fi connection, flat-screen television, and much more. The furnished apartments in Toronto are comfortable, and convenient for short or long-term stays.

Furnished apartments in Toronto are strategically located in areas with convenient transportation options available nearby. Therefore, traveling within the city for work or leisure is much easier than all the serviced apartments. Some of the serviced apartments come with an on-site gym, sauna, and swimming pool so that the fitness enthusiasts can carry on with their workouts and relax whenever needed.

At TheSqua.re, we make sure that all our guests get a personalized staying experience during their visit. We thrive to offer optimum comfort, the best service, and a pleasant stay to our guests. Our management is available 24 hours to address any concern or issue that the guests might have.

Toronto is an international center of business and finance hence, many corporate travelers visit the city on a regular basis. People traveling for work are often in search of a place that offers home-like comfort and facilities for the period of time they have to stay in a new city. At Thesqua.re we offer everything corporate travelers look for. From comfortable furnishing to a well-equipped kitchen, we provide a safe and secure environment with privacy to all our guests.

In our corporate housing in Toronto, the travelers will find- high-speed Wi-Fi connection, work-station, flat-screen television, comfy sofas, cozy beds, elegant dining space, and much more for their convenience.

Apart from work, people travel to the capital city of the Canadian province of Ontario for sightseeing, experiencing the culture, and enjoying the arts. The city is home to many renowned museums, zoos, aquariums, and of course the 1,168 feet long CN Tower. There are many options for tourists to stay in but the best and rising choice for them is a serviced apartment. With optimum comfort, top-notch facilities, convenient location, and easy conveyance options nearby; serviced apartments in Toronto are best suited for people traveling alone or with family and friends.

Where to Stay in Toronto?

Very often Toronto is called the New York City of Canada, one of the reasons that seem to be similar are the many skyscrapers in the city. The central area of Toronto is known as Downtown and one of its focal points is the Yonge-Dundas Square that lies at the intersection of two major streets. This section of the city holds most part of the entertainment and shopping district. The division between East and West Toronto, Yonge Street is important for its course; running north to the south till Lake Ontario. The iconic CN Tower and adjacent Rogers Centre are centrally located Downtown and are both quite famous amongst tourists. CN Tower offers amazing views of the city, while the Rogers Centre is a multipurpose events arena that is very popular among local people.

As the capital city of the Canadian province of Ontario, Toronto is an international center of finance, business, arts, and culture. People visit the city for various purposes like- work, leisure, family vacation, solo travel, and much more. Our top serviced apartments in Toronto are located near all the major business centers and tourist attractions of the city therefore, whichever location one might pick to stay, there are convenient transportation options available nearby. 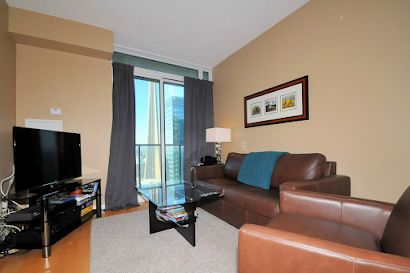 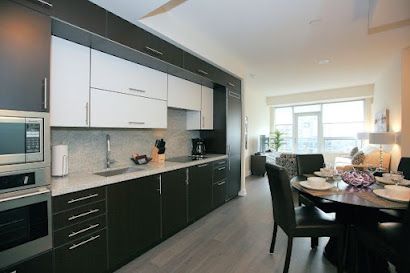 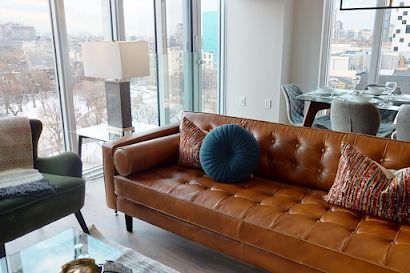 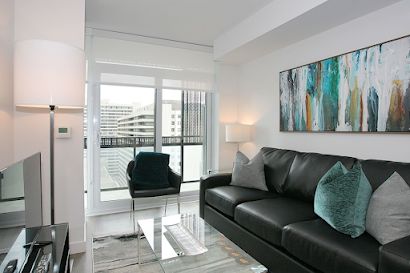 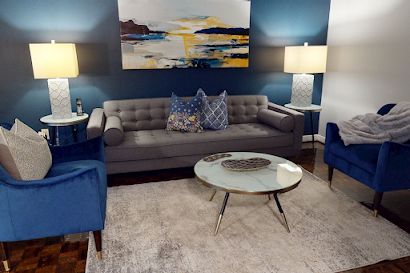 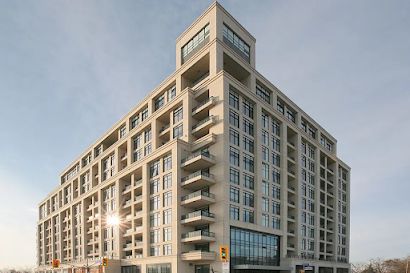 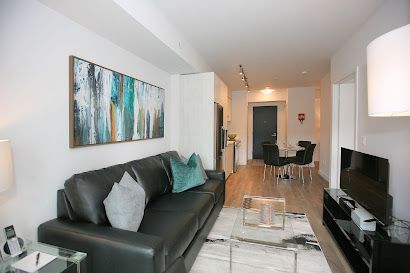 Things to know before booking serviced apartments in Toronto

Toronto is the most populous city in Canada. For more than 10,000 years people have inhabited and traveled through the area. Though most of the population speaks English in Toronto, there are more than 160 languages spoken in the city. Toronto is known for its many skyscrapers and high-rise buildings, in particular, the tallest free-standing structure in the Western Hemisphere, the CN Tower.

The city is home to the Toronto Stock Exchange, the headquarters of Canada's five largest banks, and the headquarters of many large Canadian and multinational corporations. Its economy is highly diversified with strengths in technology, design, financial services, life sciences, education, arts, fashion, business services, environmental innovation, food services, and tourism.

Cost of Living in Toronto

Toronto is known to be an expensive city to live in. The major portion of the monthly expenses is the house rent which constitutes 38.1% of total monthly expenses. Other than that the major portion of the income goes to food and transport in Toronto. This is also one of the reasons why people are increasingly opting for serviced apartments. At Thesqua.re we offer serviced apartments at reasonable pricing considering the countless facilities we provide to all our guests.

One of Canada’s major attractions is the free healthcare system, which implies that you won’t pay any direct fee for doctors’ visits or going to the emergency room. Much like the majority of countries that offer this type of healthcare, it’s funded by the country’s tax system.

Traveling to a new city or country can be a bit scary at times. Not knowing the areas and routes of a place one intends to stay in can be overwhelming.

Here are some tips for visiting Toronto that will help ease up any such concerns:

Things to do in Toronto

Toronto is filled with fun things to do. From enjoying the sightseeing to eating at some of the best restaurants in the city, there are many things that one can look forward to while visiting Toronto.

1. What are the most popular things to do in Toronto?

The most popular things to do in Toronto include visiting the CN Tower, relaxing at the beaches in Toronto Islands, watching the sunset at Riverdale East Park, and taking a stroll around Downtown.

2. What are some free things to do in Toronto?

Visit a museum that offers free admission one day a week, walk the neighborhood, go for a picnic in High Park or go to a beach and relax.

3. Does Toronto have many romantic attractions?

There are many places where one can have a great time with their partner.

4. What are the most family-friendly things to do in Toronto?

Almost everything in Toronto can be enjoyed with the family – picnics in the parks, relaxing on the beaches, sightseeing, eating at the restaurants, shopping, and much more.

5. What are the more unusual things to do in Toronto?

There are many unusual things to do in Toronto like – visiting the Bata Museum, reading books at Thomas Fisher Rare Book Library, attending a cuddle party, taking out your stress at The Rage Room, and checking out Toronto’s Half House.

Places to Visit in Toronto

Toronto is home to many great tourist attractions that attract millions of visitors every year. With many skyscrapers, beaches, rich history, diverse culture, and museums there are many things one can do while staying in Toronto.

Here are some of the most popular attractions of the city:

Places to Eat in Toronto

There is nothing that you won’t get in Toronto. There are a lot of choices when it comes to food. Whether you are in for a sophisticated dining experience or just a quick bite at the neighborhood stall, you will find that Toronto’s food scene has something for everyone. Some of the best places to eat in Toronto are Alo Restaurant, Byblos, Patois, Carmen, Sotto Sotto, Canoe Restaurant and Bar, Tennessee Tavern, Buca Yorkville, Richmond Station, Dandylion, and Donna’s.

Shopping in Toronto is more like an experience where you come across various clothing styles and designs. There is something for everyone and the budget is not a constraint as there are things available in every price range. The best areas to shop in Toronto are Queen West, Chinatown, The Distillery District, Downtown, Leslieville, Bloor-Yorkville, and Greektown on the Danforth.

The TTC (Toronto Transit Commission) offers subways, streetcars, and buses in the city of Toronto. The TTC operates four subway lines- Yonge-University, Bloor-Danforth, Scarborough, and Sheppard. The bus stops are situated on either side of the road, and the buses are frequent, so people don’t have to wait for long. Streetcars (trams) are powered by overhead electric cables and stops only at the streetcar stop. To travel to other municipalities in the GTA, one can catch the commuter GO train from Union Station, Toronto’s main transit hub.

In Toronto, the summers are comfortable; the winters are freezing, dry, and windy, and it is partly cloudy all year round. The best time to visit Toronto is from late June to early September as the season is warm and the average daily high temperature stays above 68° Fahrenheit.