If you are seeking comfortable and high-quality accommodation options, nothing works better than serviced apartments. They offer ample space and privacy while also making you more comfortable for extended durations. Our serviced apartments in Washington DC ensure that you get the right blend of impeccable service and facilities.

Here are the Best Furnished Apartments in Washington DC:

Our furnished apartments in Washington DC come with ample comfort and privacy. They also offer the best amenities such as private access, fully-equipped kitchens and flat-screen televisions. Expect the best concierge services, free Wi-Fi and room cleaning wherever possible. The apartments offer the most practical yet fulfilling solution for those staying in Washington DC for short/long-term periods.

There are numerous benefits towards choosing furnished apartments in Washington DC. Firstly, you get access to all the facilities and amenities at your fingertips. Also, you get a better alternative towards conventional rentals in the city, offering greater convenience overall.

What lies behind the soaring popularity of Washington DC serviced apartments? All contractual, legal and other aspects are covered. You do not have to fork out any deposit amount or costs of maintenance along with utility bills. You will not have to bother about furnishings, accessories, cutlery and appliances.

Serviced apartments usually lie in close proximity to major public transportation points. They are also well connected to major business and commercial zones. Tourist landmarks are also located nearby. Some apartments even have swimming pools, gymnasium memberships and more.

Guests are expected to find our serviced apartments in Washington DC ideal for extended stays in the city. Even if they are shifting to the city, it should not be a problem at all. They can enjoy the buzz of the city and locality with aplomb courtesy of our apartments.

Being experts in serviced apartments, we understand how guests need a place to call their own in a different city. We make sure to offer luxurious and comfortable interiors. We also offer the best amenities and facilities. Our service is impeccable while we retain the human touch. We strive to solve issues and address queries swiftly as well.

Our corporate housing in Washington DC is an ideal option for all those traveling for work. Our apartments come equipped with high-speed Wi-Fi and flat-screen televisions. They also offer well-equipped kitchens, appliances and security features. Enjoy relaxing in your super-comfy bed along with plush furnishings for company. Revel in the sheer amount of space and privacy on offer. Have colleagues over for after-work drinks or meetings. Relish unwinding at your own pace. Give vent to your culinary ambitions whenever you want. Get out and about, checking out nearby restaurants, bars, tourist landmarks and more. Access public transportation and business zones in a jiffy. Your stay in Washington DC will be more memorable courtesy of our apartments.

Also Read: Best Things to Do During Your Business Trip to Washington DC

Our furnished apartments in Washington DC are suitable for holidayers and families. They come with all the space, flexibility and privacy that you desire. From ample space and luxurious furnishings to comfortable beds and bathroom amenities, you have everything you need. They come with the best appliances, well-equipped kitchens and security features. Enjoy staying connected with high-speed Wi-Fi. Flat-screen televisions and cable packages take care of your entertainment requirements with aplomb. Some apartments even have added facilities like swimming pools and gymnasiums for maximum pleasure. You can access public transportation in the vicinity along with tourist landmarks. Find the best shopping, dining and entertainment hubs nearby.

Where to Stay in Washington DC

Washington DC is full of several picturesque and charming neighborhoods. Downtown is the best area to stay near major attraction and the bustling establishments. Capitol Hill is the best place for sightseeing and a historical vibe while Chinatown is a vibrant and eclectic neighborhood.

You can also consider the hip and ultra-cool Foggy Bottom or even the H Street Corridor. Dupont Circle is a colorful and culturally enlivened neighborhood. Logan Circle offers bustling nightlife and families will also enjoy staying at Georgetown. 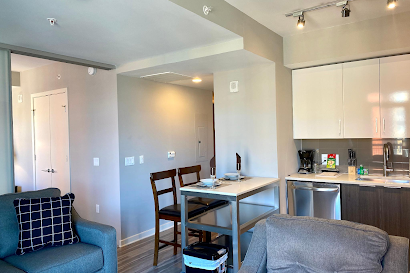 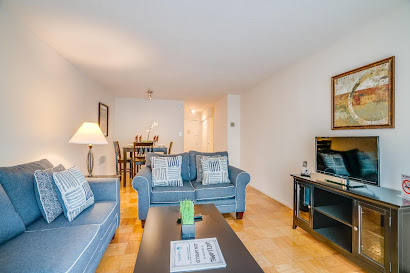 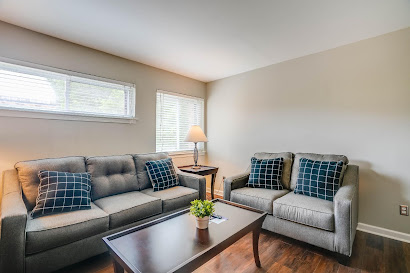 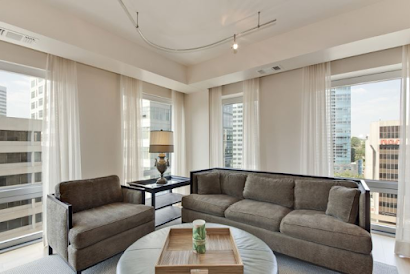 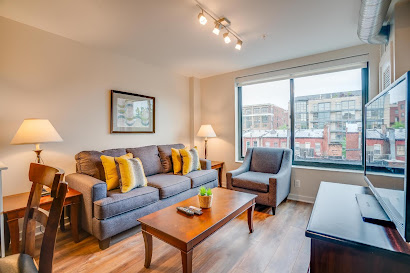 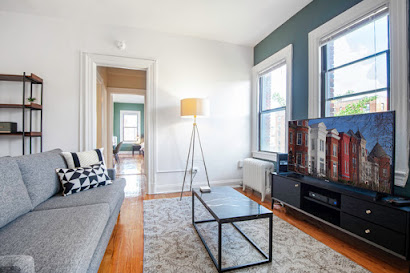 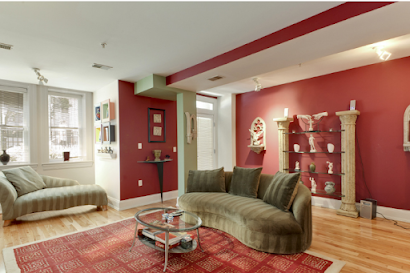 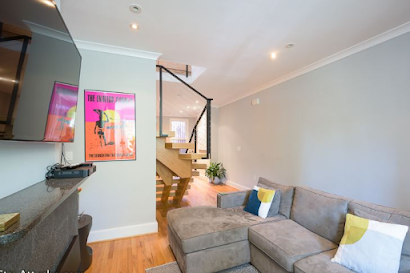 U St/African-Amer Civil War Me...

Things to know before booking serviced apartments in Washington dc

You may also be interested in
More about Washington dc

Washington DC has an earlier acronym, i.e. the District of Columbia. It lies on the Potomac River near Virginia and Maryland. Congress held its first ever session in 1800 here. The city is named after the iconic George Washington, the United States’ First President and Founding Father. Columbia, the nation’s female personification, lends its name to the federal district. Washington DC is the seat for the federal government in the U.S. and several global organizations.

Here are some facts about Washington DC:

Washington has a diversified and fast-growing economy. The gross product stood at $435 billion for the year 2014, covering the Washington Metropolitan Area. In 2016, GDP per capita touched $160,472.

Cost of Living in Washington DC

An average restaurant meal costs anywhere around $15-23 while a mid-range restaurant will charge upwards of $80. A one-way local transportation ticket comes for $2-5 while monthly passes cost $100 approximately. Utilities cost $152.52 every month while monthly rentals hover between $1400-6000.

Here are some tips for visiting Washington DC:

Things to Do in Washington DC

Washington DC offers a plethora of things to do for travelers. Here’s taking a look at the same.

1. What are the most popular things to do in Washington DC?

The most popular things to do in Washington DC include visiting the Lincoln Memorial, Tidal Basin, Vietnam and Korean war veterans’ memorials and also the Smithsonian National Air and Space museum.

2. What are some free things to do in Washington DC?

Some free activities include touring the White House and Smithsonian museum along with the cultural arts arena in DC. You can take guided tours on foot while exploring the biggest library in the world and also the U.S. Capitol Building.

3. Does Washington DC have many romantic attractions?

Romantic attractions for travelers include the Smithsonian National Museum of Natural History and U.S. Capitol along with the National Gallery of Art, Lincoln Memorial and Library of Congress.

4. What are the most family-friendly things to do in Washington DC?

Family-friendly attractions in Washington DC include the Smithsonian’s National Zoo and Conservation Biology Institute. You can also check out the Glen Echo Park and Mount Vernon Trail along with the Rock Creek Park.

5. What are the more unusual things to do in Washington DC?

Some unusual things to do in Washington DC include viewing live music performances and festivals along with uncovering the artwork scene. Union Market has lovely food stalls while you can check out the Great Falls and the charming trails. There are breweries and beer gardens galore as well.

Places to Visit in Washington DC

The best places to visit include the following:

Places to Eat in Washington DC

There are several places to eat in Washington DC for travelers. Try Latin American flavors at Seven Reasons or the tantalizing Bolognese cuisine at Modena. Thamee offers vibrant Burmese picks while CUT by Wolfgang Puck offers high-end dining. Stellina Pizzeria is one of the best pizza joints while Estuary is good for seafood.

There are several street food options in Washington DC. You can try pizza with veggies and calamari, fish in paper cones and even Burmese street food cuisine. Try street food from Trinidad at Cane including hops bread rolls and smoked brisket. You can also enjoy street food at evens like Smorgasburg. Some top joints include Momo Yakitori, Mezcalero Cocina Mexicana, Kuya Ja’s Lechon Belly and Bombay Street Food.

Shopping is a delightful affair in Washington DC. Georgetown is a great place to shop for its accessories and iconic establishments. Downtown DC is another great shopping spot for its retail choices like Kate Spade, Dior, Hermes, Burberry and a lot more. U Street/14th Street comes with several top stores while Dupont Circle offers joints like Tiny Jewel Box and Proper Topper among others. Chevy Chase and Friendship Heights are two other locations for shopping.

Washington DC offers pleasant fall and spring seasons which are great times to visit. Summers are hot while winters may be mild with frequent blizzards as well. Visit in spring during the cherry blossom season for a magical experience.