One of the prime locations of Bengaluru, Ulsoor also known as Halasuru is one of the oldest parts of the city. Narrow lanes and old temples, a huge beautifully maintained lake, this peaceful and quiet neighborhood is one of the best places to stay in Bangalore.

While some parts of Ulsoor still have the old Bangalore charm, the close proximity to the business and IT hubs made this an upbeat and modern neighborhood. Located in the center of the IT capital of India, Ulsoor has many hotels and B&Bs to stay in. However, if you are looking for a place you can call home for a long or short duration of stay serviced apartments in Ulsoor are the best options for you.

Our Serviced Apartments in Ulsoor come equipped with all the amenities that travelers would need for a perfect stay. One can enjoy a cozy bedroom, living room as well as a fully equipped kitchen where cooking is as simple as it gets. Others include free Wi-Fi to connect with friends and family, besides so much more.

Where to Stay in Ulsoor

Ulsoor is a mixture of multiple cultures, including the old-world charm of Bengaluru and the new Gen-Z. The area is green and serene and has places that are ideal for any traveler. And if a traveler is lucky, they might as well well get to see the beautiful Ulsoor Lake from their windows with different hues of the Ulsoor’s vista, what a great view for your morning coffee!

Contact the reservations team at TheSqua.re to book your apartment in Ulsoor, or take a look at our Bangalore serviced apartments. 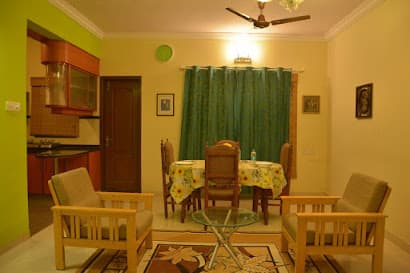 Ulsoor has a surreal charm about itself for many. To some, it's a military establishment. A few facts of the area can be found below:

Bengaluru is known to have one of the best weather in the country, as the climate here is not too extreme, be it heat or cold. The summer months of May and June experience average high temperatures of 35 degrees Celsius. If the mercury goes any further, it rains to bring the temperature down. Nights can be cool and chilly. The months of October to February experience temperatures dipping to about 10 degrees Celsius which makes it perfect for a winter getaway. The months of June to September come with the monsoon where you may experience rain at least twice a day or more.

Lined with temples connected by narrow streets, the romantic idyll of the Indian dream comes to life in this town. Significant structures in the area include the 16th Century Halasuru Someshwara Temple and 13th Century Sri Subrahmanya Templen Halasuru. The INTACH conservation trust have listed 90 heritage buildings of interest in the area.

Cubbon Park is within walking distance of the accommodation. Possessing ornate architecture, statues and well-manicured gardens, Cubbon Park is the ideal location to unwind following a long day. The imposing Vidhana Soudha, peaceful Bulge Rock Garden and Bull Temple are accessible on foot.

Commercial Street, Brigade Road and MG Road offer guests the opportunity to indulge in some retail therapy. These hugely popular retail hubs are lined with store owners peddling everything from arts and crafts to saris and silks to children’s toys.

Getting around in Ulsoor

Like many other districts in Bengaluru, the best method of travelling is by using public transport- particularly the train. Bengaluru City Junction Railway is a short distance away, as is the Halasaru Metro Station. Although a little more time consuming due to congestion, the bus is a popular way of travelling around the city. There are several bus stops located near the apartments.