Amsterdam: From the Golden Age to a Financial Hub

When we conjure up images of Amsterdam in our heads, we imagine a place of great beauty, but also a fun city that doesn’t take itself too seriously. Despite being an important European financial centre people’s perception of Amsterdam is a place to relax, unwind and party hard.

This hasn’t always been the case, Amsterdam used to take itself very seriously, as did the rest of the world. In fact in the time known as Amsterdam’s Golden Age, Amsterdam was the most important financial centre on the planet.

The Golden Age ran for nearly a hundred years, from 1585 to 1672, but the origins of the city stretch back much further. 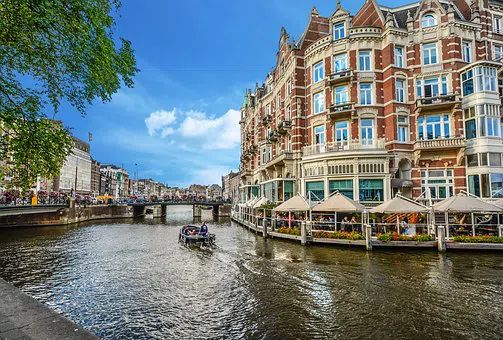 As with most successful European cities through the ages, Amsterdam was formed around a river, in this case the River Amstel. It is widely believed that the formation of the city started with the construction of a dam across the river by fisherman in around 1270.

This construction helped to form a natural harbour at the mouth of the river which was used as a trading post where small ships could trade with much larger ones which had travelled from further afield.

City rights were granted to Amsterdam in 1306.

Architectural excavations which took place at the beginning of the 21st century have discovered that people were living around where the city lies from much earlier than 1270 however. Axes, hammers, and pottery indicate that the area was actually populated as far back as 2600 BC.

Growth of the City

Over the years Amsterdam continued to thrive. Europe had started to suffer from religious revolts and persecution resulting in people from many religions seeking safety in Amsterdam. These included Protestants from Belgium, Huguenots from France and Jews from the Iberian region.

Amsterdam suffered two devastating city wide fires in 1421 and 1452. The second fire destroyed over three quarters of the city, after which the Emperor signed a decree stating that all new houses must be made from stone. This is why there aren’t many examples existing today of traditional wooden buildings from that time period. The Hooten Huis is the most notable and best preserved exception.

At the beginning of the Golden Age, Amsterdam went through a rapid expansion. It had previously been a city surrounded by a moat, the Singel, but for the first time the city began to grow past this area.

Ships based out of Amsterdam were trading in places as far away as Africa, South America, North America and Indonesia and had built a trading network that was the envy of the world. During this time the Dutch East India and Dutch West India Companies were formed. The former was one of the first multi-national companies and was the first to finance itself by the sale of stocks.

These stocks were often sold to sailors whose job it was to take the goods abroad to trade, thus ensuring that they had a vested interest in the goods they were carrying. They also had loyalty to the company they worked for and this set up was the base for Amsterdam’s worldwide success.

Amsterdam was now the financial centre of the world and the busiest shipping hub in Europe. The city was celebrated during this time in paintings from one of its most famous sons, Rembrandt.

When you’re at the top, people always want to bring you down and this happened with Amsterdam after devastating wars with France and the United Kingdom.

The Napoleonic Wars plunged Amsterdam into one of the lowest points in its history. It was no longer the centre of the financial world and this decline into poverty continued for nearly 150 years until the Kingdom of the Netherlands was formed in 1815.

The industrial revolution at the end of the 1800s kickstarted Amsterdam’s fortunes and the second Golden Age began. People flocked back to the city and the population quickly grew.

Amsterdam has always been a popular destination for tourists. Its perceived high level of social tolerance has long been held in high esteem by younger travellers.

At the beginning of the 21st century the city made a concerted effort to push for even more tourists by the means of advertising campaigns. It was a great success, 3,000 extra hotel rooms were built, serviced apartments in Amsterdam also became more popular and this increase in tourism revenue also continues to see Amsterdam’s stock rise in terms of being a finance hub.

Corporate housing in Amsterdam has continued to increase, providing accommodation for businesses who are bringing people to the city in increasingly larger numbers.