What’s on in Dunedin

Dunedin offers a fantastic mix of stunning landscapes and fascinating cultural history. Often referred to as the Edinburgh of New Zealand, the city evokes its Scottish heritage with pride - being one of the best-preserved Victorian and Edwardian cities in the Southern Hemisphere. Away from the historic centre, the rugged hills and awe inspiring views of the Otago Peninsula, or the incredible wildlife including the world’s rarest penguin colonies and numerous species to be found only in New Zealand.

Where to stay in Dunedin

Dunedin offers some fantastic places to stay, ranging from luxury hotels to backpacker hostels. Serviced apartments are also an option for those planning a longer stay in the city, and often offer the chance for a much more comfortable experience, due to enhanced features such as private access, dedicated wifi and full kitchen and cooking facilities. The Squa.re present a range of such properties, each having been chosen according to our exacting standards, ensuring that we can offer you the best Dunedin has to offer - whether you are looking for a single-person studio or larger scale corporate housing.

What to do in Dunedin

Dunedin is a perfect place for those who want to get in touch with New Zealand’s rich cultural history. Offering some of the best preserved colonial architecture anywhere in the world, simply exploring the streets of Dunedin throws up numerous fascinating sights and landmarks.

But the city isn’t all history - it’s old world facade hides many modern and thriving social hotspots, with plenty of artisan cafes, world class restaurants and several modern art galleries. Those seeking to enjoy a cultural evening out will also find the city’s theatres offer a varied programme of events and shows all year round.

The city is also a great place from which to explore the surrounding countryside - an area particularly noted for its wildlife. Many tourists flock to the area to tour the Otago Peninsula for its scenic hikes and natural landmarks. The diverse wildlife in the region also draws in visitors from all over the world.

Tips for staying in Dunedin

Dunedin is full of excellent places to eat, ranging from fine dining to small grill restaurants serving local produce. Bracken Restaurant on Filluel street is a popular venue, serving upscale New Zealand cuisine, whilst Etrusco at the Savoy is the place to go for fine Italian dining. For something a little more low key, Emerson's Brewery offers a range of simple dishes in a relaxed and social atmosphere.

The city has several shopping destinations, the two major places being Meridian Mall on George street and the Wall Street Mall - each playing host to numerous famous brand retailers, electronic good stores and places to grab a bite to eat. George street in general is littered with standalone retailers, ranging from pop-up craft stores to DIY shops.

There is so much to do in the city, that many visitors will find it hard to see everything in a single trip. Toitū Otago Settlers Museum is a particular highlight, charting the development of the city, whilst the Otago Museum showcases the indigenous culture of the south island. Of course, the area is also famous for the Oamaru Blue Penguin Colony, which draws visitors from all over the world and is a must see for first time visitors.

Like much of New Zealand, Dunedin does not feature an extensive public transport network. There are no trains or metro services, so those wishing to travel around using public transport are limited to the bus routes that run across the city and to the surrounding areas. Therefore, if you are looking to further explore the island, then it is advisable to hire your own transport upon arrival. The city centre is also reasonably easy to explore by bicycle, or on foot for shorter journeys.

The city features a diverse economy, comprised of manufacturing, publishing and technology-based industries as well as education, research and tourism. Calder Stewart Industries is one of the major manufacturers to actually be headquartered in the city, whilst several agricultural firms, namely CRT Society, PGG Wrightson and Silver Fern Farms are also major employers in the region. 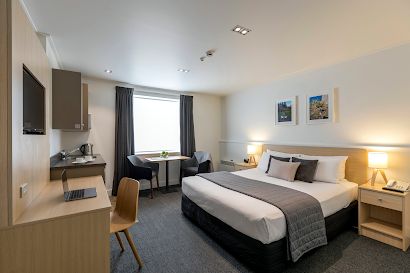