This largest city in Scotland is home to a fine range of Glasgow serviced apartments by TheSqua.re. With so many locations to pick from and long itineraries to tick, our abodes hop in to make things easier. Each apartment comes furnished like a home ready to move in. Located in the best parts of Glasgow, it is all about reducing distances. This not only helps you in saving time but also offers comfort. We make travel stays simpler with home-like kitchens, bedrooms, coffee makers, and a view to wake up to.

Our teams are available 24x7 to take care of you in a new space. We make services like a concierge desk, cots, patios, and maid services available. It is a holistic living experience that we wish to deliver. From traveling with kids to holidaying with a spouse, we ensure that the moment you enter the abode you feel at home. With so much to offer, we can't wait to have you at our Glasgow serviced apartments.

Some of the Best Luxury Serviced Apartments Glasgow include:

Some of our finest abodes sit right here to excite you for your stay in our Glasgow serviced apartments. You must skim through a set of amenities to excite you about your stay with us. What makes us call our abodes so unique is the holistic ways that make each part of the apartment come together. The living room welcomes guests into a decorated safe space that feels welcoming. Unlike the cold hotel rooms in posh parts of the city, our abodes welcome you to the heart of the local spots.

You get to make cultural exchanges from within the city. Pick this instead of getting a lavish meal in a high-end restaurant in the name of culture. With so many local pubs and restaurants surrounding our apartments, make the most of it. The locations ensure that you get to travel as easily as you can without paying high fares. A lavish bedroom & cozy bathroom are always in perfect shape to welcome you back home. Our furnished apartments in Glasgow ensure that you get to experience all kinds of comforts even in a new city.

Work travelers often tell us that living in a posh hotel gets very cold after a point. Family people often miss home a lot on longer trips. There are a handful of things that go missing in a hotel setting. We aim to revive them all in this serviced apartment concept. Our corporate housing in Glasgow ensures that you get to whip up your own meals at your own convenience. With a full-fledged kitchen at your service, you can prepare a meal from scratch like at home. Our modern kitchen appliances like microwaves let you reheat your take-out from lunch.

Working in a new city can get more hectic than this. That is when facilities like a dishwasher come to the rescue. With our maid services made available every week, you get to ensure cleanliness. Hygiene will always be your top game no matter how busy you get. With crisp clean linens awaiting you, who wouldn’t consider living in a home away from home?

The most tiring part about finding a short-term abode is that it takes an equal amount of research. The pressure of finding a property closest to where you have plans in this port city can be a daunting challenge. Our short term rentals in Glasgow are all about providing the finest locations in each listing of our portfolio. Each of our abodes sits in secure neighborhoods with departmental stores, chemists, and coffee shops right around the corner. With restaurants and transport hubs right outside too, you don't have to worry about picking locations.

The interiors of the homes come completely equipped with items of daily needs. With lavish bathrooms, cozy welcoming beds, modern kitchen appliances, and a balcony view, you are sorted. Grocery packs, inductions, and regular kitchen ingredients help you keep your health and diet in check. Whip up your breakfast or a late-night snack even on a trip. Talk to your assigned team to know where you get access to a poolside or gym center.

Families traveling for a vacation with kids adore our massive storage spaces and lots of cute nooks. Ensuring privacy on a whole with combined bedrooms can be a challenge in itself. With a thoughtful placing of each amenity in our holiday apartments in Glasgow, we ensure to keep everyone happy. With a concierge desk to take care of your luggage, mails, tours, and arrangements, get set to taste the best of Glasgow. Our team stays on its toes 24x7 ready to serve you online at all times. Your comfort and satisfaction are a top priority as your holiday means a lot to us too.

What makes holidaying even more convenient is having accommodation in the heart of the city. With local transport available right at your apartment doorstep, you can tick off long itineraries in less time. Even if it is a short trip, you get access to the best local food, attractions, and vibe. Get to your nearest party place to enjoy by the night and sneak back in before the kids wake up. What can be a better way to sneak in a romantic trip even on a holiday with family? Make the most of our holiday apartments in Glasgow to make memories with your best people.

Where to Stay in Glasgow

This beautiful port city sits in the western lowlands of Scotland. Glasgow is the biggest and the most populous city in Scotland. This means that there are a lot of exciting spaces to consider here. One such location to stay in is Bath Street in Glasgow. Enjoy the culture and Victorian architecture here. You can easily get access to Opera, Ballet, and Theatre near here.

While all kinds of arts dominate this area, Pollokshaws Road is another prominent option to pick. This is where most of the commercial scene takes place. Go bar and restaurant hopping or sit in Queen’s Park. If you get lucky, you can get to attend a game at the iconic national football stadium here. The supermarkets are right around the corner as well.

The transportation is a plus point with most of these areas but you will need it especially if you have work here. South West Glasgow is one such part where you get direct access to the Hospital & the University that Glasgow is known for. And apart from that one gets everything from IKEA to entertainment. Stroll around BBC studios or just savor the beauty of this beautiful city in Scotland’s port city. 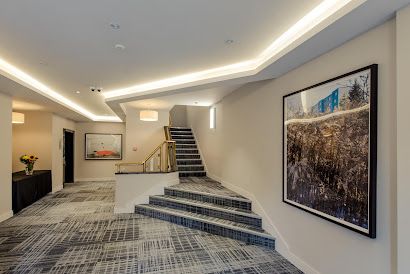 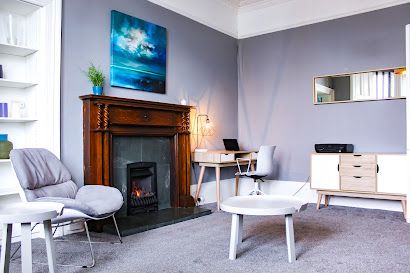 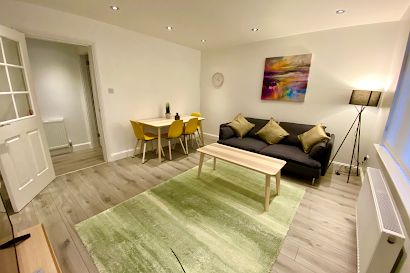 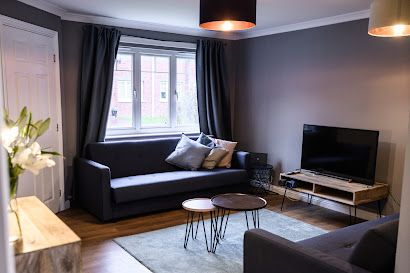 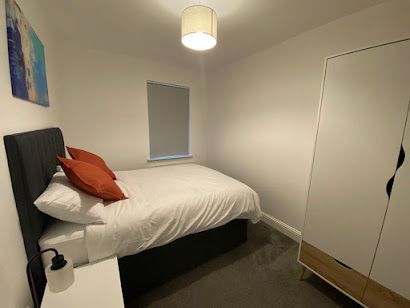 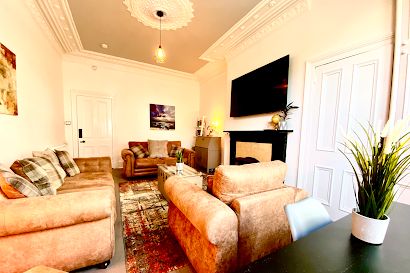 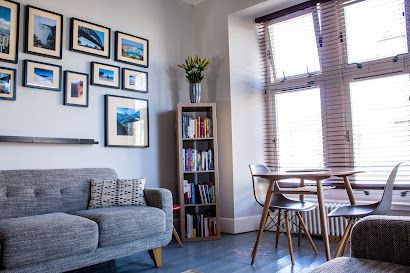 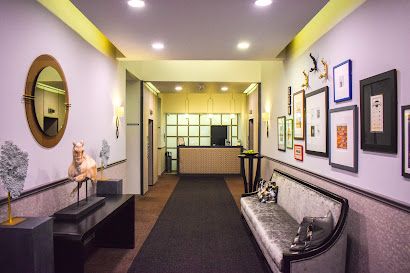 Things to know before booking serviced apartments in Glasgow

Where to Stay in Glasgow?

Like any city in the world, Glasgow has its districts and neighbourhoods that define its reputation but also show off its individual characteristics, from trendy areas to former industrial spots, and ones with a dash of style and an old fashioned streak. With many parts of the city to stay in, guests can find the one that is suitable for them.

Some of the best parts of Glasgow include:

There is a saying about Glasgow that goes like this, ‘think of Manhattan but with a Scottish accent’. Though the city centre is considered to be the most happening place due to its connectivity and vibrant nature (but minus the skyscrapers of the Big Apple), other places are renowned for their attractions.

Travelling to a place without knowing the facts of the city could be a major drawback to any tourist. Glasgow, a place adorned with beautiful colonial buildings, museums, parks, and pubs, is surely a place that awakens the inquisitive feeling to the visitor to explore more about the city.

Here are a few facts that are worth reading about Glasgow:

A few other facts about Glasgow include:

Things to Do in Glasgow

With all its art nouveau architecture, galleries, museums, restaurants and busy streets, it’s safe to say that there are plenty of things to do in the city of Glasgow. Exploration and adventure await all those that choose this Scottish city as their getaway city for a few days or even a few months. The Q&A below can point all travellers in the right direction when it comes to all the things to do in Glasgow and how to spend their time wisely.

What are the most popular things to see in Glasgow?

These are the top 10 attractions in Glasgow:

What are some free things to do in Glasgow?

Here are 10 free things to do in Glasgow:

Where should guests spend their nights in Glasgow?

Here’s how tourists should spend their nights in Glasgow:

Places to Visit in Glasgow

Every place has a history to tell and so does Glasgow, boasting of some fantastic colonial buildings as well as up-to-date hangouts. So, while in Glasgow, guests won’t have to worry about how to spend their time as there is a legion of places that are awaiting the appreciations of visitors.

Places to Eat in Glasgow

Who can resist eating? Especially, if travelling to a new place like Glasgow? Being one of the busiest cities, Glasgow has so many good cafes and restaurants that are worth trying. From its authentic dishes to global cuisines, Glasgow has it all and surely knows how to satisfy its guest’s palate.

What foods should visitors try in Glasgow?

What are the best restaurants in Glasgow?

Here are 10 of the best restaurants in Glasgow:

What are the top posh restaurants in Glasgow?

Here are the 10 poshest restaurants in Glasgow:

What are Glasgow’s cheaper dining options?

When in Glasgow, these are some of the cheapest places to eat:

Sometimes a restaurant is just too expensive or not wholly convenient when tracking through the attractions. At times like these, something different is required. Street food in Glasgow has many pros, as it not only serves food at cheaper rates, but they are tasty and serve global cuisines.

Here are some of the street food options to try in Glasgow.

When it comes to shopping, there is no looking back when it comes to Glasgow, as the city offers the best retail therapy after tiring sightseeing. It is considered the next hot destination for shopping only after London. There are designer labels, independent boutiques, flea markets, antique emporiums, and Scottish tartans and Cashmere to vouch for.

Check these places for a good shopping experience in Glasgow:

Glasgow is known for its bus services managed by the Strathclyde Partnership for Transport (SPT). Apart from that, Glasgow comprises of all major transport systems like air, railway, and road. The main bus terminal is the Buchanan bus station and the bus operators in the city include, Glasgow Citybus, First Glasgow, Stagecoach West Scotland and McGill’s Bus Service Station. The city has two major airports, mainly, Glasgow Airport and Glasgow Prestwick Airport.

Costs for each travel network varies between which type as well as where guests are travelling to. However, it is worth noting that tickets start from £1.40 and bike rentals start from £1 for every half hour.

Located in the Centre Belt of Scotland, Glasgow’s climate is oceanic – meaning the city experiences cool summers and cool winters. It is the rainiest city in the UK, where the city gets 170 days of rain in a year. Summers are cool and do receive few spells of rainfall. However, the months between March to May are the autumn season, where the weather is cool and pleasant. The trees and plants begin to flower filling the city parks and gardens with fall colors. Thus, making the autumn season the best time to visit Glasgow.