Located in the heart of London, Aldgate is a contemporary area defined by skyscrapers and modern apartments. Each apartment comes with a comfortable living space, a fully equipped kitchen, complimentary Wi-Fi, and great access to the city of London. Perfect for long or short stays, serviced apartments are an ideal alternative to hotels. Our Aldgate serviced apartments are situated in an affluent area of east London and welcome a high number of business visitors every year. This inevitably means there is also an abundance of corporate housing and serviced apartments locally, supporting the ever-fluctuating professional population.

When you want to stay in Central London, you will find our modern and spacious apartments of all possible varieties. Situated close to Shoreditch, Old Street, and Hoxton, business and leisure can be conducted easily from our Aldgate serviced apartments.

Some of our top serviced apartments in Aldgate include:

These properties are ideal for short and long-term stays and come fully furnished with all amenities provided. Short and extended stays in Aldgate are given an extra bit of style thanks to amenities such as home entertainment and cooking facilities - making for a much more personal stay. 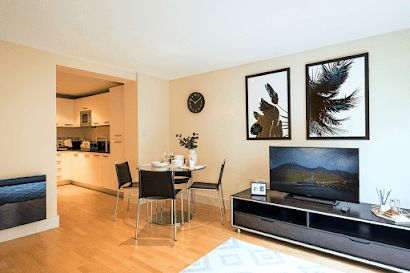 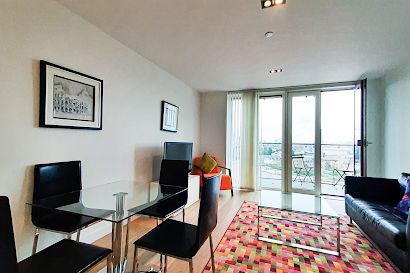 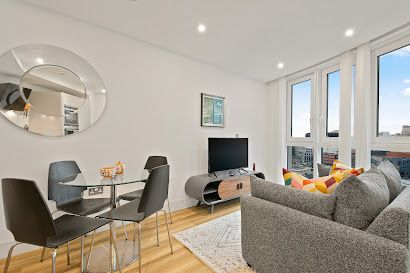 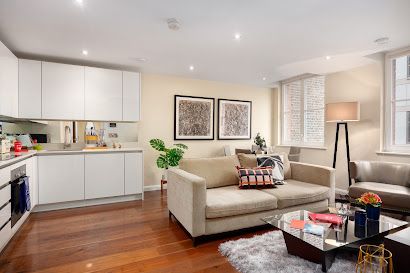 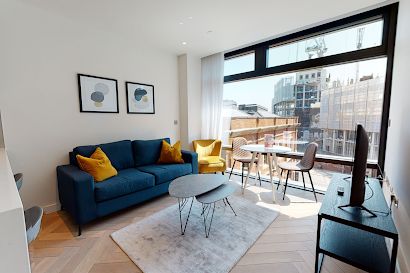 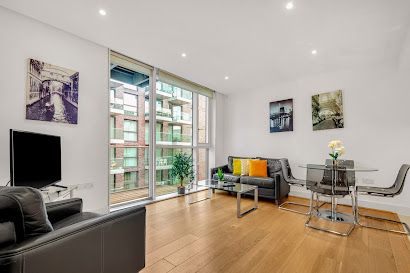 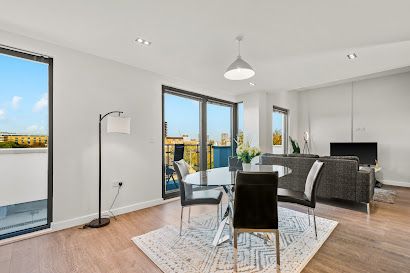 Where to Stay in Aldgate

Our award-winning serviced accommodation in Aldgate has comfort and convenience in mind. All apartments are guaranteed to offer the highest standard of interior decor, whilst also offering a high level of functionality. The Aldgate East has one of the best Aldgate serviced apartments.

Things to Do in Aldgate

Aldgate’s location is among several of London’s most diverse and exciting districts means there is never a shortage of things to do and landmarks to see. There are plenty of transport links, meaning anyone staying in Aldgate can quickly get to the West End, Greenwich, or Canary Wharf - all of which offer incredible activities and attractions, day or night. Whilst Aldgate itself is largely orientated towards commerce, there are still plenty of fashionable cafes and bars, open spaces, and local points of interest to keep visitors entertained locally.

Is Aldgate close to any tourist attractions?

Aldgate is a key location for London’s insurance industry, as well as being within the same borough as Canary Wharf. This means that Aldgate is inevitably well practised in welcoming large numbers of business travellers every week, which is reflected in the neighbourhood's abundance of cafes, bars, and eateries - many of which cater specifically towards a business clientele.

What are the best things to do in Aldgate?

Aldgate is particularly noteworthy for its abundance of historic sites. Those with an interest in London’s past will find they can explore Roman and medieval relics charting the development of the city from an ancient stronghold to a modern metropolis. Aldgate was also the location of some of the crimes of the infamous Jack the Ripper - which still draws fascination with 21st-century visitors to the neighbourhood, looking to retrace the footsteps of the notorious killer. Aldgate’s multiculturalism also makes it a fantastic place to dine out and enjoy different flavours.

Does Aldgate have a good nightlife scene?

Aldgate has a great selection of traditional London pubs and the whole area comes alive with city workers following the close of business. There’s also a fantastic selection of restaurants, for those looking to enjoy a romantic night out, as well as plenty of music venues and even a local theatre.

Are there many popular excursions from Aldgate?

Aldgate is ideally situated for visitors to the area to explore other locations in London. For example, a short journey on the Docklands Light Railway is Greenwich - with its myriad museums and maritime attractions. Alternatively, there are plenty of locations further afield, such as Richmond, boasting royal palaces, stately homes, and botanical gardens which offer the perfect day out of the city.

Places to Visit in Aldgate

There are numerous places to visit in Aldgate as well as a great selection of landmarks and attractions within easy reach of the neighbourhood. Visitors will find they are spoilt for choice when it comes to historical sites, modern attractions, and places of cultural significance. Below is a selection of some of the highlights:

Places to Eat in Aldgate

If there is one area in which Aldgate really shines, it is in its huge selection of places to eat. Nestled between several famous gastronomy locations, those staying in Aldgate have the option of authentic ethnic and international cuisines, high-class fine dining, and plenty of avant-garde eateries. Those looking for fine dining can choose from esteemed venues including Satyrio- Italian Restaurant & Wine Shop, and VQ Aldgate - as well as the famous Culpeper gastropub.

However, Aldgate and its neighboring areas are particularly noteworthy for their offerings of international cuisine. Brick Lane is notorious for its huge array of Indian and Asian cuisine, with Aladin Indian Restaurant, Cinnamon Bricklane, and Eastern Eye Balti House being amongst the best on offer. Alternatively, there’s also plenty of no-frills ‘pub grub’ on offer, with The Hoop and Grapes and Leman Street Tavern being very popular with locals and visitors alike.

Aside from its huge amount of restaurants, grills and takeaways, Aldgate also hides a surprising number of street food vendors, which are ideal for those looking to grab a quick bite to eat on their lunch break. The aforementioned Brick Lane is also home to a food court, which offers a huge variety of street foods, covering most international cuisines. Closer to Aldgate station is TifinBox, offering a great selection of Indian takeaways to eat on the go, or MuMu street food, with its exciting range of Thai dishes.

Aldgate and its neighbouring areas offer an incredibly diverse experience when it comes to shopping. Visitors will find numerous independent shops dotted around the streets, as well as several global brands along the main high street. However, the selection of nearby markets is where Aldgate really comes into its own as a shopping location. Petticoat Lane Market is a genuine piece of London history as well as a great place to find quirky, independent fashions. There’s also Brick Lane market, which has everything from bespoke furniture to arts and crafts, or the lively Whitechapel market.

Alternatively, those seeking a more traditional shopping experience will find that there are several city malls within easy reach of Aldgate. These include:

Aldgate is close to the centre of London - so getting around is never going to be an issue. Those seeking to travel around the city have the option of taking the tube, as well as a comprehensive selection of bus routes. Aldgate is particularly well connected to the London Underground, with Aldgate East offering District and Hammersmith & City lines, whilst nearby Aldgate connects to the circle and metropolitan lines. Overground trains can be taken from neighbouring Whitechapel Station and the Docklands Light Railway is accessible via Shadwell station. Of course, there is also the option of Uber and taxi hire. Other well-connected stations within walking distance of Aldgate include:

The best time to visit Aldgate is in spring as the flowers start blooming in the gardens. So tourists must visit the place in July and August because of the pleasant weather during that time. The two coldest months of the year are January and February when the temperature reaches around 2°C.

Cost to Stay in Serviced Apartments in Aldgate

Aldgate is derived from a former gate in the ancient city of London. It was situated on the former London Defensive Wall surrounding the city which was built by the Romans in 200 AD. In the present day, Aldgate is a neighbourhood which consists of part of the London Borough of Tower Hamlets. This place is ancient by origin and people can observe an amalgamation of present and past surrounding this area. Being located near the City of London and the Whitechapel area, Aldgate is a go-to place for living in the city. The cost to stay in Serviced Apartments in Aldgate depends on various factors such as nightlife, public amenitiesand the number of hospitals and so on. Some of the best apartments surrounding the Aldgate area- Monochrome Edge, South Bank Star, Midnight Blue Valentine, Pizzazzy Piazza and so on.  The cost to stay in Serviced Apartments in Aldgate varies from £333 per night in Pizzazzy Piazza to £744 per night in South Bank Star.