Once the heart of NYC’s punk scene, East Village is home to astounding nightlife, old-school bars, music venues, cocktail bars, boutique shops and hip restaurants. As such it is more for leisure travellers looking to chill or corporate travellers that want to let their hair down when the business has all been taken care of.

Some of the best furnished apartments in East Village NYC include:

Complete with the likes of a fully equipped kitchen, a flat-screen TV, Wi-Fi connection, cosy and stylish furnishings, beds that are ideal to recharge in for the next day and even the possibility of gym access and more, these luxury East Village apartments in NYC will bring any short or extended stay to life.

East Village isn’t the biggest neighbourhood in New York but it still has enough space so there are plenty of choices when it comes to finding the perfect serviced apartment. With long streets and green spaces around, there are a fair few locations that can satisfy any traveller staying in the hip neighbourhood.

Leisure and corporate furnished apartments in East Village NYC easily accommodate those looking to stay here for either short term or extended stays - with apartments being spacious enough to house small and big groups! Offering clean and spacious bathrooms, air conditioning throughout and fully fitted, fully equipped kitchens (giving guests the freedom to prepare and cook in their own time), guests will quickly settle into their bespoke living space. Wi-Fi allows them to connect online, at the same time as enjoying the surroundings in stylish and comfortable lounge areas!

With all of these amenities to be found within TheSqua.re’s portfolio of East Village apartments for rent in NYC, comfort and convenience are never far away when guests book with one of the top global networks. 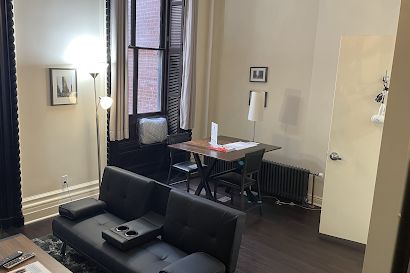 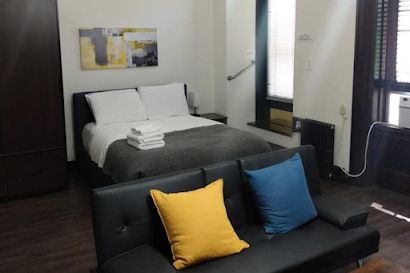 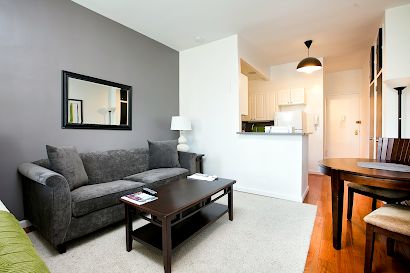 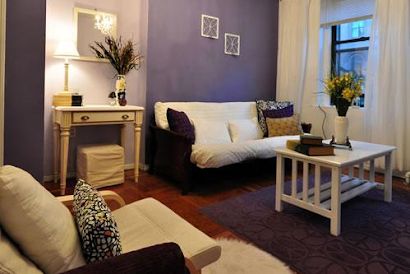 The East Village neighbourhood has a special place in the heart of hipsters and trendy individuals. And it’s not surprising with the history the neighbourhood has with the counterculture movement. Before guests pack their bags for NYC and settle into their luxury East Village furnished apartment, they should read up on the facts below to know where they’re heading:

Things to Do in East Village

Being a centre for hipsters and trendy folk, it’s not hard to imagine that there are plenty of things to do in East Village. Whether it’s few museums or a selection of the brightest and tastiest restaurants in the neighbourhood, the area can deliver for anyone, day or night.

Q.What are the most popular things to see in East Village?

These are the top 10 attractions in East Village:

Q. What theatres would you recommend in East Village?

Here are the best theatres in East Village:

Q. Where should you spend your nights in East Village?

This is how guests need to spend their night in East Village:

Places to Visit in East Village

Once guests are fully settled into their furnished apartments in East Village, they can begin to explore the borough at large, and take in the trendy places that bring its character surging to life. From parks to museums, there is much to enjoy.

East Village’s top 10 attractions can be found below:

Places to Eat in East Village

No matter how luxurious an apartment may be, most guests will still want to eat out, even if it’s a trendy burger place or a fine dining establishment. Luckily for them, East Village is home to a vast selection of restaurants that serve global cuisines; not just American burgers, steaks and fries. From Chinese food to fine Japanese noodles and the typically scrumptious bagels that NYC is famous for, there are many places to eat in East Village.

Q. What foods should visitors try in East Village?

Q. What are the best restaurants in East Village?

Here are 10 restaurants that have to be checked out:

Saving money is easy when eating at these cheap establishments:

East Village has been the centre of bohemian lifestyle since the early 1900s when it was a favourite for writers like Allen Ginsberg and artists such as Diane Arbus. Its side streets and alleyways held bookstores and cafes that inspired and delighted the city’s great thinkers. Today, the neighbourhood is still home to a thriving community of long-time residents that still remain tight-knit. Quality food also abounds in the East Village, with storefronts often concealing some of the best food in the city. It’s best for visitors not to forget that the side streets are also dotted with jewellery shops and vintage stores, many of which are locally owned.

The East Village never fails to keep the excitement going long after other neighbourhoods hit the pillow. Follow the foodies, dive bar enthusiasts, and vintage-hunters to the east end of Manhattan, where head-turning street style is the norm - a lively neighborhood with an adventurous spirit that defines downtown living. Subway stations connect travellers to the rest of New York (not forgetting the 100’s of yellow taxis too), but with the area living up to the image of “classic New York”, why would anyone want to leave?

New York weather in the winter can be very cold, with temperatures frequently reaching below zero Celsius.