Nestled in the central heart of Manhattan in New York City, Midtown West is a highly buzzing and desirable neighbourhood. It is where travellers will find some of the city’s most iconic and signature structures like the Chrysler Building, Empire State Building, United Nations headquarters, Grand Central Terminal, Hudson Yards Redevelopment Project and Rockefeller Center with its tourist hotspots like Times Square and Broadway. It is no surprise that business and corporate travellers prefer furnished apartments in Midtown West since the area is linked to almost all major corporate and business hubs in NYC along with its signature attractions.

Midtown Manhattan is possibly the world’s biggest CBD (central business district) while being one of the costliest real estate locations in NYC. The luxurious shopping street Fifth Avenue has the highest retail rentals globally. The Midtown West zone offers proximity to the biggest entertainment, media and commercial center in the USA along with a fast-growing financial hub as well. Midtown covers the whole of Manhattan Island and is bordered by the Hudson and East Rivers to its west and east respectively.

Here are some of the top choices for furnished apartments in Midtown West:

Our Midtown West serviced apartments come equipped with all the necessary facilities to keep you comfortable during your stay. From free Wi-Fi for your networking and connectivity requirements to comfortable beds and fully equipped kitchens, everything you need is at your fingertips.

Where to Stay in Midtown West

There are several locations where people usually look up furnished apartments in Midtown West. These include West 55th Street, West 48th Street and even accommodation near Central Park, a major tourist landmark in its own right and one of the most pleasing neighbourhoods in New York. 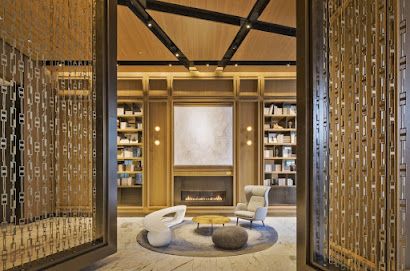 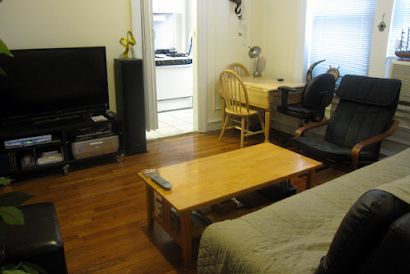 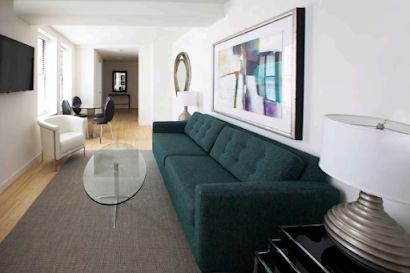 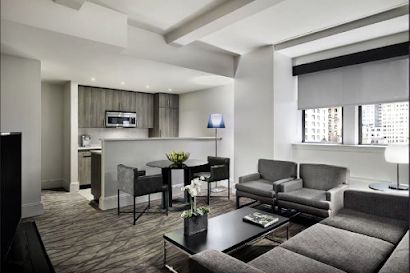 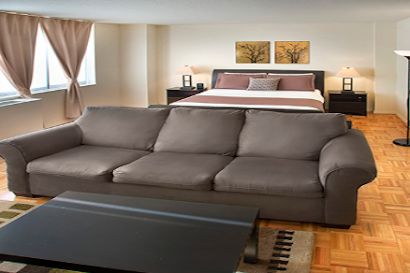 Here are some interesting facts that you should know about Midtown West:

Cost of Living in Midtown West

It goes without saying that rentals and home prices are both at sizably higher levels in Midtown West than many other parts of the city. Since this is one of the most exclusive and posh parts of the city, costs of living are on the higher side. The median home price here is approximately $1,140,100 while rentals may start from $3,290.44 approximately (and upwards) for a 1 bedroom apartment unit in the City Center. Fine dining, cultural establishments and bars/pubs will charge higher prices if you’re visiting the hippest joints. There are friendly and comparatively cheaper neighbourhood establishments as well.

It can sometimes be a little daunting to travel abroad to another destination. A few tips may prove really helpful in such scenarios.

Things to Do in Midtown West

There are several things that you can do if you venture out from your serviced apartments in Midtown West, New York.

Q. What are the most popular things to do in Midtown West?

Here are some of the most popular activities to do in Midtown West.

Q. What are some free things to do in Midtown West?

If you are on a budget, you can enjoy some equally delightful activities in Midtown West. These include the following:

Q. What are some family-friendly things to do in Midtown West?

Here are some family-friendly things to do in Midtown West:

Places to Visit in Midtown West

You will find multiple fascinating places worth visiting in Midtown West. Some of them include:

Places to Eat in Midtown West

There are several places to eat in Midtown West, ranging from fiery Thai joints to sumptuous Italian fare. Some of the top options include:

If you are craving a burst of flavor and delicious bites on the move, here are some of the best street food options in Midtown West.

There are several delights lined up for shopping enthusiasts in Midtown West. These include the following:

Midtown West is an apt place for commuting to several parts of New York City. It has one of the biggest subway networks in NYC. You will find the blue (A, C or E) and red (1, 2 or 3) lines within walking distance along with the purple (7) and yellow (N, Q or R) lines as well. Underground connections are available as well which is a major boon during the winters. Find the central bus station for travelling to NYC and from it to various places, at the Port Authority Bus Terminal. The Pennsylvania Station, the key intercity railroad station for NYC, is also a short commute away for those living in Midtown West. Transportation options like cabs are also available aplenty throughout the neighbourhood. A short walk through Midtown West will land you in the heart of Times Square, one of the busiest and most iconic thoroughfares in New York City.

New York City, as you may know already, is home to diverse and wide-changing weather conditions. The city often witnesses cold and freezing temperatures during the winter season while summers are hot and humid. Spring and fall are two of the most beautiful and picturesque times to visit the city and areas like Midtown West in Manhattan. The weather can change suddenly at times, particularly during summers while the winters may seem longer than they usually are! However, every season has its own specialities when you are in New York City. Summers are on the hotter side and the humidity levels are higher owing to the island location, taller buildings and vast concentration of people in a single area. Temperatures may soar during this time although they are balanced out at times by commonly occurring thunderstorms. Various major outdoor events take place during the summer including the Macy’s Fireworks parade on the 4th of July, outdoor concerts and events at Battery Park and several outdoor art exhibits as well. August is a month which has slightly lesser crowds and could be a rather unique yet interesting time to visit.

The autumn season witnesses sudden bursts of rainfall along with frequent temperature changes with fall being one of the most beautiful seasons to truly experience the romance and charm of the Big Apple. The northeast foliage draws people from across the USA and several other parts of the world. The yellow, orange and red hues paint a pretty picture across the city’s parks (notably Central Park) and public areas. The month of September is slightly sticky and humid at the beginning although it settles down to a lovely month in October when temperatures are more comfortable, precipitation levels are lower and the foliage is absolutely picturesque, to say the least. You can consider visiting New York at any time of the year.