What’s on in Collingwood Mews

Collingwood Mews is a semi-residential area a short distance from Newcastle city centre. As such, it offers all the attractions of the UK’s ‘friendliest city’ whilst affording a degree of tranquility, away from the hustle-and-bustle of city life. With numerous parks, bars and restaurants, Collingwood Mews itself offers plenty to see and do, making it one of the North’s most popular commuter havens. If you are planning a visit to the area, you ‘re sure to find the welcoming atmosphere and range of amenities will afford you an enjoyable stay.

Where to stay in Collingwood Mews

Collingwood Mews has many options for accommodation, but being a more residential area than the city of Newcastle, it has an abundance of serviced apartments. These are often the preferred option for anyone making an extended stay in Collingwood Mews, as the area offers everything from functional corporate housing to luxury apartments and studios. Furthermore serviced apartments not only offer enhanced privacy, full catering facilities - essential for longer visits, but also come with conveniences usually associated with hotels, such as room cleaning, plus reception services.

What to do in Collingwood Mews

Being so close to Newcastle city centre, Collingwood Mews is ideal for those who want to explore the vibrant nightlife, myriad of restaurants and diverse cultural activities of ‘the toon’. Just a short bus ride away, visitors to Collingwood Mews can choose to spend the day exploring the city, before retiring for a quiet meal closer to home.

Newcastle itself offers untold amounts of sights and activities - famous for its welcoming atmosphere, the city has a thriving nightlife scene with everything from modern cocktail bars to traditional old-world pubs. Visitors will soon understand why Newcastle has its reputation for offering a great night out.

Alternatively, Collingwood Mews itself has plenty to offer for those who prefer a slower pace of life. There are numerous restaurants and pubs in the area and the high street itself has a lively nightlife on the weekends. Further to this, there are also several green spaces and parks for those who enjoy the outdoors.

Tips for staying in Collingwood Mews

Branches Desmond and Bistro 42 are two of the most popular places to eat in Collingwood Mews, serving a range of traditional British cuisine and comfort foods. There are also several great gastro pubs in the area, including the Collingwood Arms and Wylam Brewery Tap - both of which serve menus ranging from traditional pub dishes to international cuisine. Slightly further afield, but still outside of the city there’s also L'ulivo - a rustic Italian restaurants that is something of a hidden gem.

Of course, Collingwood Mews itself can hardly compete with Newcastle city, with its famous Metrocentre mall, but the high street nonetheless offers several small retail outlets providing consumer electronics, second hand clothing and independent retailers selling everything from handcrafts to children’s toys. There are also a collection of large outlet stores on Kingston Park, including Argos and Matalan superstores.

Collingwood Mews encompasses just a small area, so those looking for major entertainments and attractions will likely head into Newcastle. However, there are some great places to enjoy the outdoors in the immediate vicinity, including Town and Nun Moor and St James’s Park. Alternatively, for those interested in history, the Banqueting House is an 18th century Gothic folly set in picturesque parkland.

Collingwood Mews has numerous bus stops, running in all directions from the high street and covering the surrounding suburbs as well as towards North Shields and, of course, Newcastle city centre. There is also an underground station in nearby Gosforth which also provides a quick and easy way of reaching nearby points of interest. Those wishing to travel further afield will need to find connecting services from the city centre. Alternatively, Collingwood Mews itself covers a reasonably small area and is easily covered on foot.

Whilst there are several professional services operating out of the immediate vicinity, such as Collingwood Legal Services, most of the big business and industry operates out of Newcastle itself. The area is particularly known for its strong retail sector, which is in the top ten for consumer expenditure in the UK. Many famous retail brands have their headquarters locally, including Goldsmiths Jewellers and Greggs bakeries. 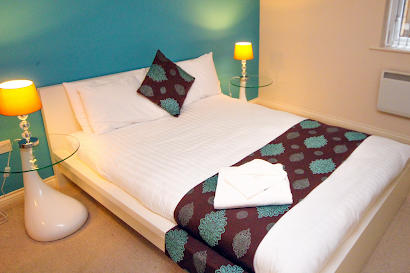 Things to know before booking serviced apartments in Newcastle

Explore
Newcastle upon ...
St. James Boule...
Gateshead
You may also be interested in