First Hill is a well-known locality in Seattle, Washington. It is named after the hill on which it lies neatly positioned. This is the very first hill that travelers encounter while going eastwards to Lake Washington from Downtown Seattle. First Hill is surrounded by the Interstate 5 and E. Pike Street along with the E. Madison Street. Capitol Hill lies further beyond along with S. Main St and International District. Boren Avenue and Broadway also share boundaries with First Hill along with 12th Avenue. First Hill is often called Pill Hill since it is home to major healthcare centers.

Some of the Best Furnished Apartments in First Hill:

Our serviced apartments in First Hill are accompanied by the best amenities and facilities. From free Wi-Fi and comfortable beds to well-equipped kitchens, you get everything at your fingertips. Enjoy a cozy and comfortable stay in our impeccably furnished apartments.

Contact our reservations team at TheSqua.re for booking your furnished apartments in First Hill. You can also browse for more accommodation choices here.

Our First Hill furnished apartments are ideal for corporates and business travelers. After hectic work days and meetings, come back to sheer bliss. Our apartments offer plush furnishings and comfortable beds. All necessary amenities and appliances are available for your convenience. Enjoy staying connected throughout your trip. Relax with the best bathroom amenities and ample space. Have colleagues over for meetings or mini parties. Enjoy the best entertainment and recreational facilities alongside. Security features guarantee peace of mind likewise. Our apartments are also well connected to key business and commercial hubs. Get out and about with ease, courtesy of access to local transportation nearby.

Our serviced apartments in First Hill are great choices for families and leisure travelers alike. They offer all the space, comfort and privacy that you require. Everyone gets to enjoy top-of-the-line amenities, facilities and appliances. Enjoy entertainment and recreational facilities, complete with free Wi-Fi connectivity. Fully-equipped kitchens help you rustle up healthy personal meals in style. We offer super comfortable beds along with vital bathroom amenities alongside. Safety and security features keep you secure and calm all throughout. Our apartments are also well connected to major public transportation facilities nearby. Key tourist landmarks and other attractions also lie in the vicinity.

Where to Stay in First Hill?

First Hill has several delightful places to stay for travelers. You can try staying at some of the charming thoroughfares nearby. These include the James, Madison, Cherry and also the Jefferson Streets. Yesler Way is a good place to check out along with Broadway and Boren. Jackson Street is another good option for first-time travelers. 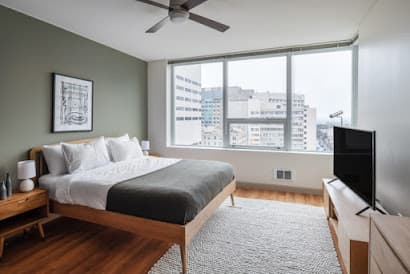 Here are some interesting facts about First Hill that you should know more about:

Cost of Living in First Hill

Average home prices hover somewhere around $484,600 as per reports. The average apartment rental comes for anywhere around $1,266. Utility costs may involve paying upwards of $182 or even closer to $200. Getting a simple haircut will cost you roughly $35 while a movie is closer to $15. First Hill is a moderately expensive neighborhood.

Here are some tips that will hold you in good stead while you are visiting First Hill, Seattle.

Things to Do in First Hill

First Hill offers an abundance of attractive things to do for travelers. Here’s taking a look at some of them.

1. What are the most popular things to do in First Hill?

Some of the most popular things to do in First Hill include checking out the lovely Waterfall Garden and Sky View Observatory along with the Chihuly Garden and Space Needle. You can also take special food tours along with exploring the Museum of Pop Culture and Seattle Selfie Museum.

2. What are some free things to do near First Hill?

There are several free things to do near First Hill including a visit to the delightful Seattle Japanese Garden or the Seattle Selfie Museum. You can also try Puzzle Break, the How Street Stairs and the acclaimed Frye Art Museum. Other free attractions include the Washington Park Arboretum.

3. What are the most family-friendly things to do near First Hill?

Places to Visit in First Hill

There are numerous places to visit in and around First Hill. Some of them include the following:

Places to Eat in First Hill

There are several restaurants worth trying in First Hill. You will find a variety of dining options at your fingertips.

Some of the top choices include:

Street food options are abundant in First Hill. Some of the best choices for travelers include:

Shoppers will love exploring the wide variety of stores in First Hill. Some of the top options include:

The First Hill Streetcar line connects to several business districts and areas in Capitol Hill, Central Area, Yesler Terrace and Chinatown-International District. Pioneer Square is also connected within this network. The line has 10 stops while covering a distance of roughly 2.5 miles. The Capitol Hill light rail station also lies nearby along with several local bus lines.

July till mid-October is a great time to visit First Hill. Expect sunny weather along with minimal rainfall. Several outdoor events take place during this time. April and May are also good for sightseeing. Mid October till February is chilly and wet.