Capitol Hill is a term indicating the United States congress while also being one of the biggest and most iconic residential localities in Washington D.C. It covers the entire area along the Capitol while also covering several surrounding avenues. Capitol Hill rises up towards the District of Columbia and goes eastwards. In 1791, Pierre (Peter) Charles L’Enfant, started creating his blueprint for a federal capital city, locating Congress House or today’s Capitol Building, upon the crest of the hill. The site has famously been called a pedestal waiting for a monument.

The building accommodates the Congress while being a workplace for several locals in the area as well. The locality is now a part of the Capitol Hill Historic District which is surrounded by the Southwest/Southeast Freeway, Washington Navy Yard, National Mall, CBD and Anacostia River. The Capitol Hill Historic District has a listing in the National Register of Historic Places too.

Here are the best furnished apartments in Capitol Hill for your perusal:

Our furnished apartments in Capitol Hill come with all the facilities that you can expect. They include everything from free Wi-Fi and well-equipped kitchens to comfortable bedrooms for superior rest and relaxation.

Get in touch with the reservations team at TheSqua.re for booking your serviced apartments in Capitol Hill or keep browsing for more accommodation choices here.

Serviced apartments in Capitol Hill are the ideal choice for business travelers and corporates landing here for extended stays. High-fliers and the who’s who of the business world also require a comfortable place to relax after hectic meetings and conferences. After a painstaking work day, you will love the space and serenity offered by our apartments, not to mention the complete privacy in store. Enjoy plush furnishings, comfortable beds and all necessary amenities and appliances. Stay connected during your trip while enjoying the best entertainment and recreational facilities as well. Our apartments are also located strategically, i.e. they lie in close proximity to major government and business hubs along with public transit facilities.

Our furnished apartments in Capitol Hill will keep your privacy and comfort intact while ensuring ample room for everyone. Families and leisure travelers will love putting up at our apartments for extended durations. We offer all the appliances and facilities that you require on a daily basis. This includes well-equipped kitchens, televisions, free Wi-Fi and a lot more. Stay connected, entertained and relaxed during your time in Capitol Hill. We also offer round the clock assistance and support for resolving your queries swiftly. You can also expect great connectivity to major tourist landmarks and places of interest from our apartments.

Where to Stay in Capitol Hill

Pennsylvania Avenue is a great place to stay in Capitol Hill due to its vibrant and colorful commercial streets, restaurants, bars and stores. Eastern Market is the famous public market here while outdoor farmer stands and markets are also visible throughout the neighborhood. Staying near Barracks Row is also a good idea since it is well linked to the U.S. Marine Barracks, one of the oldest commercial corridors in the city.

First-timers should probably consider Foggy Bottom while budget travelers may look at options like Logan Circle. Dupont Circle is a good place to stay if you love pulsating nightlife and entertainment options while H Street Corridor is a hip and cool residential zone. 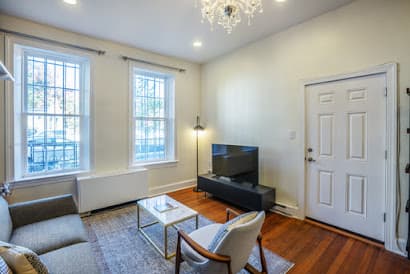 Things to know before booking serviced apartments in Washington dc

Capitol Hill has a rich history and legacy of its own. Here are some interesting facts that you should know more about:

Cost of Living in Capitol Hill

Housing prices tend to hover around $506,100 on average in Capitol Hill. The average apartment rental here is $1,362 every month. Electricity costs and other utilities work out to roughly $215 every month while phone costs may range around $182. Transportation costs are moderate including the prices of gasoline.

Here are some tips that will help you navigate Capitol Hill in a better way:

Things to Do in Capitol Hill

Capitol Hall has an abundance of wonderful things to do and other activities. Here’s taking a look at some of them.

1. What are some popular things to do in Capitol Hill?

Some of the popular things to do in Capitol Hill include visiting Stanton Park for its tranquility and also checking out the Garfield Park which is another popular spot for tourists and locals alike. You can also check out The Fridge which is a delightful performance space along with the ancient Christ Church in Capitol Hill. The U.S. Capitol Grounds are also worth exploring in this regard.

2. What are some free things to do near Capitol Hill?

Some of the best free activities including visiting the White House which is certainly a lifetime experience, along with exploring the Smithsonian museums. You can tour the cultural arts center or take a walking tour on foot. Check out the U.S. Capitol Building as well.

3. What are the most family-friendly things to do near Capitol Hill?

Family-friendly attractions and activities in Capitol Hill include the Smithsonian’s National Zoo and Conservation Biology Institute along with the Georgetown Waterfront Park that kids will absolutely love. The Mount Vernon trail is another great place to visit along with the Rock Creek Park. The Renwick Gallery and Naval Observatory Tour are other great ideas for families.

Places to Visit in Capitol Hill

Here’s taking a look at some of the most fascinating places to visit in Capitol Hill.

Places to Eat in Capitol Hill

Capitol Hill is packed with delightful restaurants. Some of them include the following:

Capitol Hill has a thriving street food circuit. Some of the top names include:

Top shopping options in Capitol Hill cover everything from local stores to the best American brands. Some of them include:

Transportation in Capitol Hill is possible through the Capitol South, Union Station and Federal Center metro railway stops. The Metrobus system has several routes passing through the neighborhood along with DC Circulator routes as well.

The best time to visit Capitol Hill is between mid-April and mid-June. Winters are cold while summers are popular with tourists. June, July and August are the hottest months here.