Kloten is a delightful municipality just outside of the Swiss city of Zurich. It is primarily known for being the location of the city’s international airport. However, aside from the airport,  Kloten is noted for the outstanding beauty of its surrounding countryside and, despite its diminutive size, it is also the base for several large corporations, meaning the small town has a somewhat significant commercial estate. Naturally, Kloten’s thriving business commercial area, combined with its proximity to the airport, have made it a mainstay on the international business travel circuit. Since a higher number of visitors requires a larger offering of accommodation, visitors to Kloten will find plenty of options when it comes to finding somewhere to stay. Of particular note are the town’s private lets - many of which are offered specifically to a discerning business clientele.

Our properties offer an enhanced level of comfort and privacy when compared to traditional hotels and guesthouses. Each includes additional amenities such as full kitchen facilities, private access, flat-screen TV, high-speed Wi-Fi, room cleaning and concierge, making them particularly suitable for those planning a work trip or extended stay in Kloten.

Contact our reservations team to book your serviced apartment in Kloten. 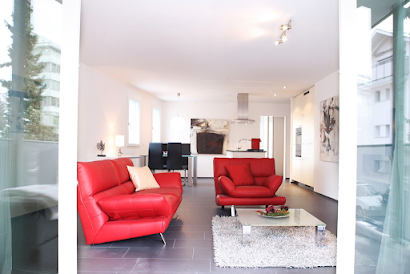 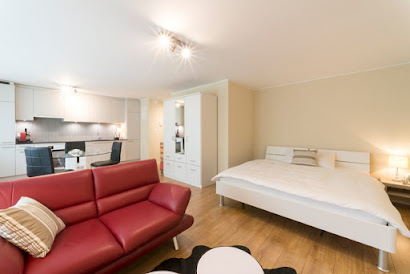 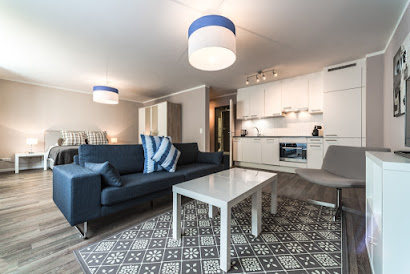 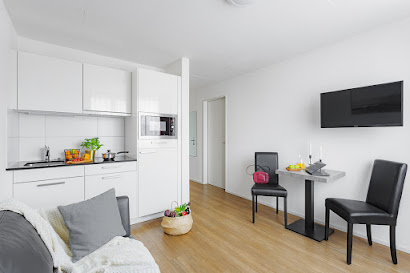 Things to know before booking serviced apartments in Zurich

You may also be interested in
More about Kloten, Zurich

Kloten is the ideal destination for corporate travellers who may need to travel in and out of Zurich for work, given that it is close to both the airport and the city itself. Of course, there are several hotels in the area, however, an increasing number of business travellers are realising that serviced apartments and short-term lets make for much more suitable corporate accommodation in Kloten. Aside from offering a much more private space, these properties offer everything to working traveller needs for a successful trip - including high-speed broadband and a flatscreen TV. They also benefit from being close to public transport hubs and local amenities, which further increases their convenience for those who may be short on time during their stay.

Whilst Kloten is hugely popular with business travellers, it should be noted that many tourists opt to stay outside of Zurich city centre - particularly those planning to explore the incredible Swiss countryside. Holiday accommodation in Kloten comes in a variety of formats, but those looking for a truly authentic stay should consider private apartments over the usual hotels and guesthouses. These genuine Swiss homes offer everything required for a comfortable stay - a self-enclosed private living space, home entertainment and full kitchen facilities. In addition, they also offer many of the conveniences usually associated with traditional hotels, such as room cleaning, concierge and reception services where available. As such, tourists seeking a more unique experience of Kloten will find serviced apartments are the perfect choice - especially for those planning an extended stay or visiting with family.

Where to Stay in Kloten

Kloten is a reasonably small area and those staying locally will need to consider just a few things when choosing where to stay. The primary reason for staying in Kloten for many business travellers, for example, is its proximity to the airport. As such, choosing to stay on the western side of the town is often the preference for corporate visitors - in particular, the area immediately west of the Schauffhauserstrasse. Alternatively, those preferring more peace and quiet, who perhaps require less frequent access to the airport may wish to base themselves further along Klotenerstrasse, towards the more residential areas east of the main town.

The Zurich canton has long been one of the most important regions for Switzerland, both politically and economically. Not only is Kloten the home of the county’s largest airport, but it is also an important commuter hub for Zurich city workers. Below are a few other interesting facts about the municipality and its surrounding area:

Cost of Living in Kloten

Zurich is listed as the third most expensive city in the world and naturally, this means the entire canton has a high cost of living when compared with many other locations worldwide. However, it should be noted that Kloten is significantly cheaper than Zurich and, whilst certain costs may appear high, it’s important to factor in the higher standard of living when considering the overall cost - after which Switzerland offers much better value for money than it may initially appear. In Kloten, it is possible to find a one-bedroom apartment from approximately £1100 per month. This compares to approximately £1500 in Zurich city centre.

Other costs to consider include travel and general leisure costs, such as eating out. These will, of course, vary hugely from person to person. However, as a rough guide, a meal for two will cost upwards of £70 in a moderately priced restaurant in Kloten. Meanwhile, a glass of wine or beer is likely to be between £6 and £9. With regards to transport, it will cost between £10 and £15 to take the train to Zurich city centre. For travel within the city and its surrounding area - including Kloten -  a Zurich Card can be purchased for £17.50, which offers 24 hours of unlimited travel on public transport as well as certain other discounts aimed at tourists. A 72-hour version is also available for £35.

Whilst Switzerland has plenty of famous sights and landmarks, it is also a country of hidden treasures and lesser-known points of interest. It is also a destination where a little prior knowledge can go a long way when it comes to keeping costs to a minimum. With these things in mind, what follows are a few basic tips for visiting Kloten.

Things to Do in Kloten

Kloten is a reasonably compact area and those staying locally will find all the facilities and amenities that can be expected in a small European town. Of course, Zurich is just 15 minutes away by train, so there are plenty of options when it comes to exploring the different things to do in Kloten and the surrounding area.

Q. What are the most popular things to do in Kloten?

Many of the most popular things to do in Kloten involve making the short trip to Zurich:

Q. What are some outdoor things to do in Kloten?

Kloten is a great location for those looking to enjoy the outdoors. There are numerous excursions that can be had from both Zurich and Kloten to some of Switzerland’s most beautiful locations

Q. What are the most family-friendly things to do in Kloten?

Kloten itself has several parks and leisure facilities catering to people of all ages. There are also numerous nature reserves and hiking trails in the vicinity, which offer a great way for children to learn about the Swiss countryside, not to mention making for a fantastic family day out. Of course, there is also the option of heading into Zurich to explore the many attractions the city has to offer.

Q.What are the more unusual things to do in Kloten?

Kloten and Zurich are great places to experience Swiss culture - some of which might seem slightly strange to the uninitiated. For example, visitors can enjoy a traditional dance and yodelling show, learn how to mix a fondue or even try their hand at making some of the famous Swiss chocolate.

Places to Visit in Kloten

Kloten is the perfect place from which to explore the wider Zurich canton, with plenty of attractions both locally and in the surrounding towns and cities. From stunning natural vistas to one of Switzerland’s most exciting cities, what follows is a list of the top places to visit in Kloten and its surrounding area:

Places to Eat in Kloten

Switzerland is extremely proud of its gastronomic heritage and visitors will find traditional restaurants all over Zurich. However, there are also plenty of modern, international eateries as well as familiar fast-food chains.

Some of the best places to eat in Kloten include:

Kloten may not be the first place that springs to mind when considering global retail centres, however, visitors may be surprised to find just how many options they have when it comes to shopping locally. For starters, Zurich’s international airport has plenty of famous retail brands and boutiques, from high-end fashion designers to familiar cosmetics retailers. The town itself also has a high street with a great selection of shops, with the Shops at Kloten Centre shopping mall offering everything from independent fashions to electronics goods.

Heading towards Zurich, there are also several other modern shopping complexes, including:

Given that it is next to Switzerland’s largest and busiest international airport, it will come of little surprise that Kloten is extremely well connected when it comes to public transport. The Line 7 train runs from Kloten to Zurich city centre every half an hour and has a journey time of around 15 minutes. There are also numerous bus services that run between Kloten, Zurich and the neighbouring towns - including some which run during the night. The bus routes to be aware of are:

Kloten itself is a reasonably small town and most people will find they can walk to wherever they need to be. Alternatively, those looking to explore the surrounding countryside may wish to rent a private vehicle, with costs starting at approximately £35 per day.

The Zurich canton experiences a temperate climate that changes according to the fours seasons. The summer months of July and August are usually sunny and warm, though slightly cooler than other parts of western Europe with temperatures rarely climbing higher than 25°C. The summer is usually the preferred time to visit for those looking to explore the city of Zurich and its countryside. By contrast, winters are much colder, with frequent snow and temperatures dropping to around freezing in December and January. Of course, this is a popular time of year for those looking to enjoy the winter sports - with Switzerland having some of the best ski resorts in the world.