All About The New Yorker Festival 2021 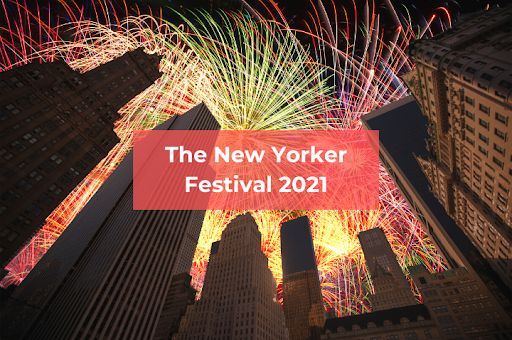 One of the biggest festivals takes place every year in the Big Apple, courtesy of the New Yorker, one of the most acclaimed media conglomerates in the city. Even this year, the New Yorker Festival will happen in the city as scheduled. It will be the 21st iteration of the mega event, being one of the most popular festivals during the fall here. It promises to offer some of the largest names in the fields of literature, politics, art, film, pop culture and music throughout performances, discussions and panels covering seven days in total. The 2021 edition will combine virtual and live events with the major chunk of the latter being filmed and provided online for holders of tickets.

The New Yorker Festival will return with its line-up of virtual and live events alike, after the resounding success of the first virtual initiative in the earlier fall. The New Yorker Festival 2021 will have experiences which are streamed live for viewers along with in-person events too. There will be an eclectic line-up of events which will have the signature mixture of panels, conversations, behind-the-scenes access and more. Some of the most popular names in pop culture, movies, music and art and literature will be highlighted. For the very first time, a majority of live events will be filmed extensively before being viewable by ticket holders on demand. This will be a major boon since they can access the same, irrespective of where they reside.

The New Yorker Festival is basically an annual festival that celebrates ideas and creativity. It features artists, editors and writers from the renowned magazine along with several other glittering guests. The entire itinerary encompasses interesting talks, screenings, interviews and performances dealing with aspects like food, business, humor, literature, politics and a lot more. Many writers also remain available for book signings over the weekend while tickets for the Traveling Dinner Parties will ensure a treat for diners. They can enjoy a sumptuous three-course meal curated by critics with wine in various locations in and around New York City.

Here’s summing up the key details of the New Yorker Festival 2021 in a nutshell: Taking a look back at the New Yorker Festival last year is important since the virtual format was followed for the first time. This edition of the 2020 festival featured talks, interviews, at-home culinary experiences and drive-in movie premieres.

The sessions that took place last year included the following:

Tickets were available for drive-in movie screenings at Queens, New York. They included the U.S. premier of One Night in Miami, the directorial debut by Regina King. Thereafter, the director and writer of the movie/stage play, Kemp Powers, had a conversation with the magazine’s David Remnick.

Participants could order curated dinners, especially created by Chefs Pierre Thiam from Teranga and FIELDTRIP’s JJ Johnson. SHOWTIME and Amazon Studios were sponsors of the festival, with the former hosting a free virtual event on 10th October. This featured Ethan Hawke and James McBride, talking about The Good Lord Bird.

The festival started in 1999 and has since become one of the must-visits on the NYC calendar. Planning to experience this cultural extravaganza? Book your New York short term rentals right away and plan your travel itinerary smartly. Here’s to oodles of fun and culturally stimulating experiences ahead!