Located in South Mumbai, India, Worli is a suburb facing the Arabian Sea. This upscale neighborhood of South Mumbai is well known for its seaside promenade with amazing views of the Arabian Sea and the Bandra-Worli Sea Link. One of the most desirable places to stay in Mumbai, for both locals and visitors, Worli has multiple staying accommodations.

From five-star hotels to fully furnished serviced apartments, Worli has it all. Mumbai being the financial hub of India attracts many corporate and business travelers from all across the world. This is also a dream city for many who wish to try their luck in the Indian Hindi cinema industry, famously known as Bollywood.

Our serviced apartments in Worli, Mumbai are designed with sleek and modern furniture and all amenities you might require during your stay. You will get a comfortable bedroom with clean and premier linen, a cupboard to store all your belongings, and a study table and chair to continue working from home if required. There is also complimentary high-speed WiFi connectivity, a flat-screen TV in the living room with a comfy sofa and chairs, and a fully equipped kitchen to cook a healthy meal.

Where to stay in Worli, Mumbai

Worli is a part of South Mumbai that extends from Haji Ali to Prabhadevi and is bounded by the Arabian Sea. South Mumbai has other Sea-facing beautiful neighborhoods, and Worli is one of them. This posh neighborhood is home to Mumbai’s rich celebrities and businessmen. Worli is quite an important area as it connects all parts of the town through Bandra-Worli Sea Link.

Worli offers some of the best restaurants, bars, cafes in Mumbai and many of which provide a great view of the sea. Close to the Bandra-Worli Sea Link, our serviced apartments Worli are situated in all prime locations to provide you access to everything Mumbai has to offer. 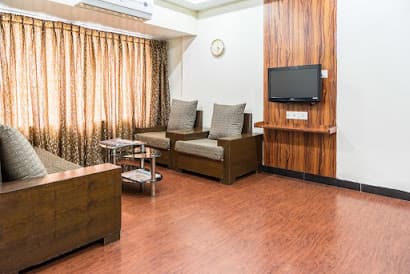 Worli is one of the four peninsulas in Mumbai, while the others are Bandra, Colaba, and Malabar Hill. Worli is connected with Bandra through Bandra-Worli Sea Link. Worli is also written as Warli, Worlee, and Varli in various historical references. Here are some facts about this neighborhood.

Located by the Arabian Sea, Worli, Mumbai hardly experiences the winter season. However, from December to February, the weather is dry and mildly cool which is a good time to visit this city. Rest of the year the weather is hot and humid. Mumbai receives a good amount of rain during the monsoon months of June to August.

Culture And Shopping in Worli

Originally, Mumbai consisted of seven island consisting of small Koli fishing communities. The city has come a long way over the past couple of centuries. One of the most populated cities in the world, Mumbai is a tale of two cities. Much of Mumbai’s rich, and sometimes arduous, history is detailed in the colonial buildings lined across the city, with several museums in the area documenting the rise of the city.

In India, the film industry is massive. Approximately, the country produces over 1200 films, with half of them being produced in Mumbai. Indian cinema has experienced sizable growth over the past couple of decades, reaching audiences in both Europe and America. For a taste of Indian film, visit the local cinema or take a guided tour of the studios.

High Street Phoenix and Phoenix City Market are two of Mumbai’s most popular shopping centres- both are easily accessible from Worli.

Getting Around in Worli

Public transport in Mumbai involves the carriage of millions of citizens every single day. With almost 90% of commuters travelling by public transport, popular commuter lines are often augmented to accommodate the requirements of daily travel.

Primarily, the main forms of public transport are: rapid transit suburban railways, busses, monorail and rickshaws. Worli-Sea Link is the best option for travelling to central Mumbai from Worli. Lower Parel Railway Station is under 2km from Worli, offering a different route to central Mumbai.

Car hire is available throughout the city, although it is not recommended due to incredibly busy roads. Chhatrapati Shivaji International Airport is 14.2km away.