Republic Day is one of India’s most important remembrance days and one of three official national holidays in the country.

It is celebrated every year on 26 January, the date chosen is the day that the Constitution of India came into effect in 1950.  This date was originally chosen as it was the same day in 1930 that the Indian National Congress declared Indian independence from the British, despite the British only having offered dominion status.

In modern times the event is celebrated across the country, but the most significant celebrations are held in the capital, New Delhi, with the Delhi Republic Day parade being the main event.

The parade traditionally commences at the residence of the President, Raisina Hill Rashtrapati, Bhaven.  It is here at the India Gate that the Prime Minister lays a wreath to commemorate all of the fallen soldiers from India who have died in various wars over the years.  The Prime Minister then joins other dignitaries, including the President.

The President unfurls the flag of India to the tune of the national anthem, this is followed by a 21 gun salute, after which the parade proper can start. 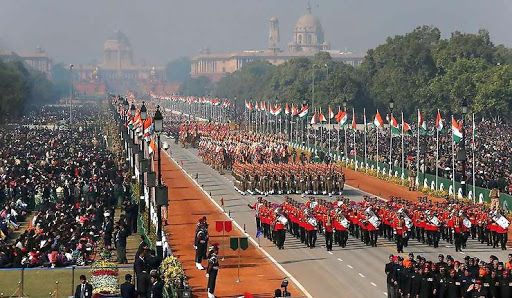 The parade consists of many parts, a large one is dedicated to the various armed forces of India.  It’s well worth looking out for the Indian Border Security Force, officially the only camel mounted military force in the world.

There’s even a K-9 Dog Squad to enjoy! Various schools in Delhi also parade, with pristine uniforms and displays which have been months in preparation.  There’s also floats dedicated to the various states within India, celebrating the diversity of the country by showcasing  the talent, music and songs associated with each particular area.

If you want to celebrate Republic Day in India then New Delhi is really the only place to be!  If you’re in the city for the parade lead up it’s also worth knowing that there is also a dress rehearsal, usually taking place on 23 January.

The parade is usually ended by a spectacular stunt motorbike display from personnel of the Indian  military.

This isn’t the end however.  The parade is rounded off in style three days later in an event known as the Beating Retreat.  The bands of the Army, Navy and Air Force get together to play popular songs culminating in another event that you won’t forget.

Remember that the city doesn’t end with the parade, if you’re looking for other places to visit in Delhi during your stay then your self catering apartment is the perfect base to do it from.

If you choose to stay in the luxury serviced apartments in Delhi, offered by Thesqua.re, then you will be right at the heart of the most important and largest parade that marks Republic Day in India.